Consumers pulled $16b from super

CitiGroup research: Retail boom in June quarter but outlook not as bullish

IT MAY be a catastrophic time in history as a new pandemic claims lives and shatters economies, but data from CitiGroup shows that despite social distancing and periods where shopping was discouraged, retail spending remains strong.

In its latest Citi Research report, the investment company CitiGroup Global Markets said Australian Bureau of Statistics showed retail sales in May were up five per cent on the same month in 2019, pushing up the June quarter data on the strength in at-home food retail and household goods.

By comparison, April retail sales were down nine per cent compared with the previous corresponding period. 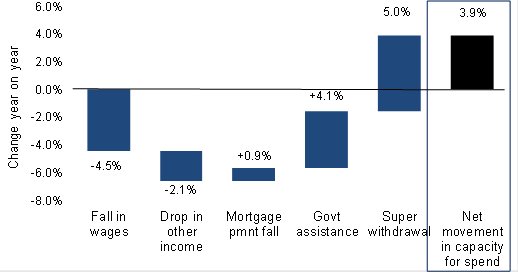 It said the upward trend was attributed to factors that were “under appreciated” which were the superannuation withdrawal rate and the drop in non-retail spending.

“The superannuation withdrawal is $16 billion in the June quarter – that is, 2.1 million people taking out $7500 – and some of that has landed in retail,” the report said.

“Even though wages income is down over eight per cent, there are also benefits from mortgage holidays and government support schemes that could be another $15 billion in the June quarter. 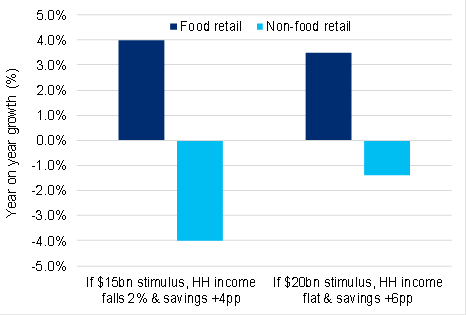 “If we include access to super, June quarter, the capacity for spending could be up 3.5 per cent year on year.

“Secondly, the drop in non-retail spend, by force, has freed up spending in retail.”

While that boosts the data for the June quarter, Citi is less optimistic about the December quarter where it says both these factors “will be less favourable”.

“Retail spending is likely to fall in the December quarter, even if there is government stimulus,” it said.

“As a result, sales growth rates could slow by four to six percentage points compared with the June quarter.”

Citi said that while the debate about the “fiscal cliff” in the December quarter is unresolved “it is difficult to see a scenario where retail spending is strong.” 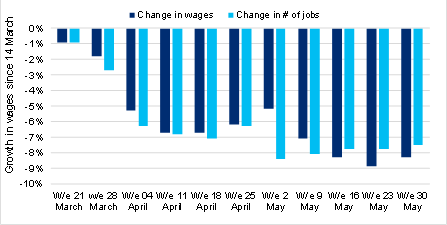 “We can see discretionary retail sales down one to four per cent even with a fiscal stimulus of $15-20 billion, from primarily JobSeeker and industry support, not JobKeeper.

“This would be a difficult environment for retailers to hold margins.”

The ABS reported that May 2020 seasonally-adjusted figures for retail showed the biggest winners were in clothing, footwear and personal accessory retailing with a 129.2 per cent increase on the same month in 2019.