Ford UK to close half its dealerships

FORD UK told its dealers this week that it would close almost half its dealerships – about 180 outlets – within five years.

It will be the biggest culling of retail sites in UK history.

The announcement comes after Honda’s announcement in March 2019 that it would reduce the size of its dealer network in Britain from 155 outlets to 55.

Ford said its slashing of dealerships would make a “stronger and more sustainably profitable Ford sales and servicing network for the future”.

The company said it would work with the owners of the affected dealerships and that no contracts would be terminated.

There is an aspiration that discontinued dealers would become Ford used-car and service specialists.

In a statement issued to Automotive Management (AM Online), Ford said that implementation of the plan would work “for the mutual benefit of our businesses and for our commercial and passenger vehicle customers”.

Ford of Britain chairman and managing director Andy Barratt said in an interview with AM that there would be no Vauxhall-style mass termination of dealer contracts.

In a statement, Mr Moran said Ford Australia “continues to work closely with our dealer partners to build a strong, modern Ford sales and servicing network that serves our customers’ evolving needs”.

“We always look to find ways to innovate and offer new experiences and reach new customers – like the immersive new Ford SmartLab at Macquarie Shopping Centre in Sydney,” he said.

The ‘Ford 2025 dealer plan’ is based on a map of the UK that would make its dealerships accessible to 90 per cent of customers within a 30-minute drive.

While showrooms would be dramatically reduced, Ford UK seems to be less heavy-handed with service centres and all current franchisees are expected to maintain an aftersales outlet and have the option of selling used cars

In his interview with AM Online, Mr Barratt said: “I would be happy if we retained all those partners” as aftersales centres.

“There will be no terminating of contracts as part of this plan and I fully appreciate and value the relationships that we have with our retailers,” he said.

“Many have invested family savings and generations of work into their businesses. I really do hope that we will continue to work together moving forward.”

Ford said in its official statement on the new plan that its dealer network and Ford of Britain national sales company had undergone restructuring over the past two decades but added that “dealer network profitability is still not sustainable”.

Mr Barratt told AM that the 2025 plan would aim to bring the network’s franchisees up from a 2019 return on sales (RoS) figure of one per cent to 1.5 per cent, with its top quartile earning two per cent with the help of higher commercial vehicle sales.

Mr Barratt said: “We are a large volume player and those are the sorts of targets that our partners should be aiming to achieve.”

Ford said it would now become a more targeted business with a strong focus on growing its commercial vehicle business and providing passenger vehicle customers with a more defined portfolio, shifting towards new automotive trends including electrification, connectivity, car-sharing and online sales.

Its statement said: “We are working together in a spirit of partnership with our dealers and their investors to build a stronger and more sustainably profitable Ford sales and servicing network for the future in the UK, which works for the mutual benefit of our businesses and for our commercial and passenger vehicle customers.

“We currently have around 400 vehicle selling points in the UK. Our goal is to create a network of around 210 to 230 sales sites over the next five years.

“Customers will not be unduly inconvenienced when buying a new vehicle; there will continue to be a Ford selling site within easy reach for the majority of our customers, with around 90 per cent of the population within a 30-minute drive of a Ford sales point.

“Many of the existing smaller sales sites will be converted into vehicle servicing centres to further improve our customer service capability.”

In its official statement issued to AM Online, Ford said that the UK was an important part of Ford’s European transformation and continued to be a critical market.

The UK is Ford’s biggest European sales market for commercial and passenger vehicles.

It also is the European centre for commercial vehicle design and engineering, for powertrain engineering and administration, including Ford Financial.

The English factories at Dagenham and Halewood remain key manufacturing operations along with Ford’s parts centre at Daventry. 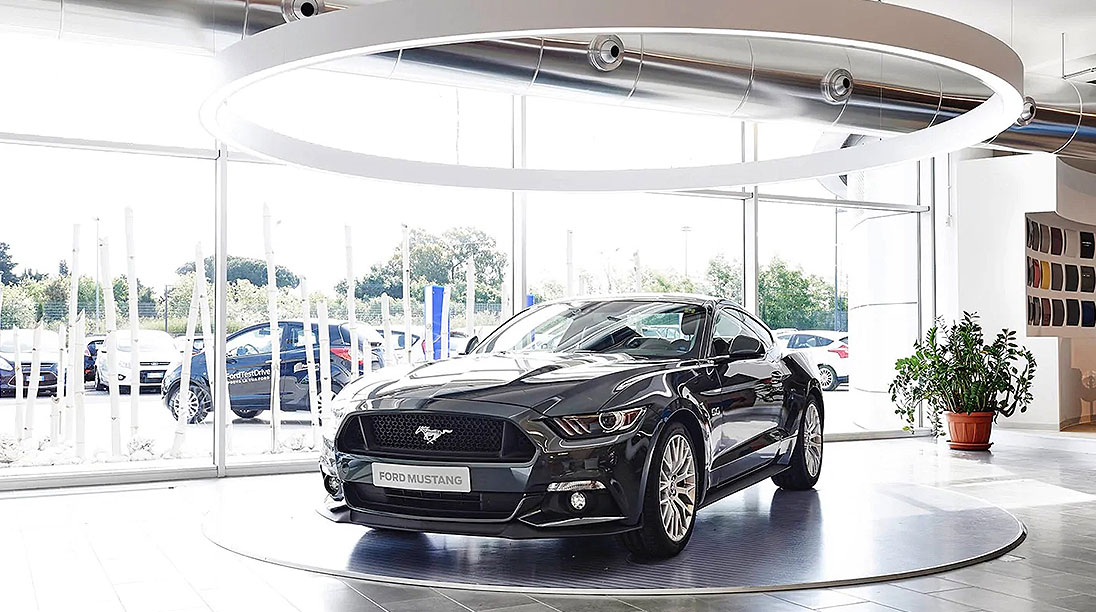