HYUNDAI is anticipating a tough second half of trading in Australia this year, with its current sales growth of 5.2 per cent expected to taper off to between three and five per cent for the full 12 months.

Hyundai Motor Co Australia (HMCA) chief executive JW Lee revealed the company’s forecast to GoAuto in an interview this week, pointing to the overall industry’s slight downturn over the past couple of months and expectations that the market this month – amid the usual flurry of end-of-financial-year deals – was not proving to be as strong as during last year’s EOFY frenzy.

He said he also saw further headwinds in the marketplace during the second half. 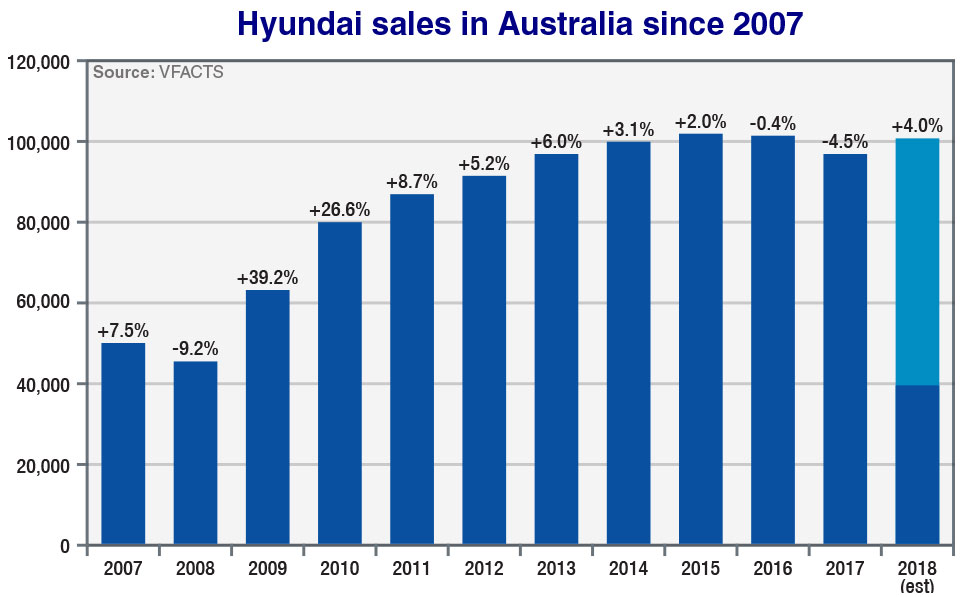 “It think it is going to be tough,” Mr Lee said, pointing to the overall market trends, falling house prices and other economic issues.

Asked whether Hyundai expected to hang on to its year-to-date growth for the full calendar year, the HMCA chief added: “I hope so, but maybe three per cent to five per cent in between.

“That means that for the second half, we will maybe slow down some pace as per the market situation.”

This is despite key new-model launches in the second half of this year, including the new-generation Santa Fe large SUV on sale early next month – a fully redesigned model that Mr Lee expects will bring in 1000 sales a month, up from the current volume of 550p/m – and the comprehensively updated Tucson mid-size SUV, which arrives late next month or early August. 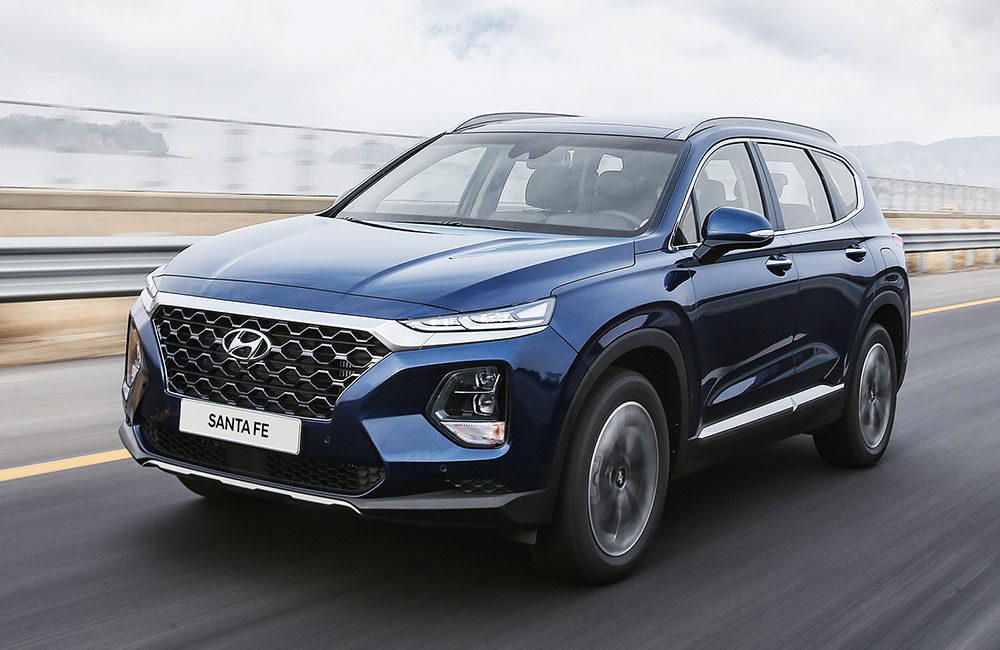 Shot in the arm: Hyundai expects to lift sales of the Santa Fe to 1000 units a month when the new-generation version goes on sale early next month.

Mr Lee said he hoped strong early demand for the Santa Fe in Hyundai’s South Korean domestic market, where delivery times quickly blew out to three months, pointed to a level of popularity that should be reflected in Australia.

“We’ve had good success in the Korean domestic market and I hope a similar situation would happen in Australia,” he said. “Our sales target is 1000 cars per month, but if the customer wants some more – why not?”

As well as Santa Fe, Mr Lee identified Tucson, the smaller Kona crossover and the i30 small car as Hyundai’s core volume- and image-driving models that he wants to see occupying a top-three position in their respective segments.

The i30, as the brand’s biggest-selling model, is currently up 3.3 per cent this year (to 11,433 units), while Tucson has fallen 9.0 per cent (on 8280 sales) – a downturn that the company expects to rectify with the updated model that will also benefit from having the new Kona and Santa Fe standing on either side.

Kona has recorded 4986 sales to the end of May this year after launching last October, which is currently only good enough for sixth in the segment – a position Mr Lee wants to improve upon.

“If we can get some more volume out of Kona, which is in an emerging segment, this would be much better for us,” he said. “But the Kona, as a totally new model in the small SUV segment, it is gradually gaining some popularity and reputation from our customers. 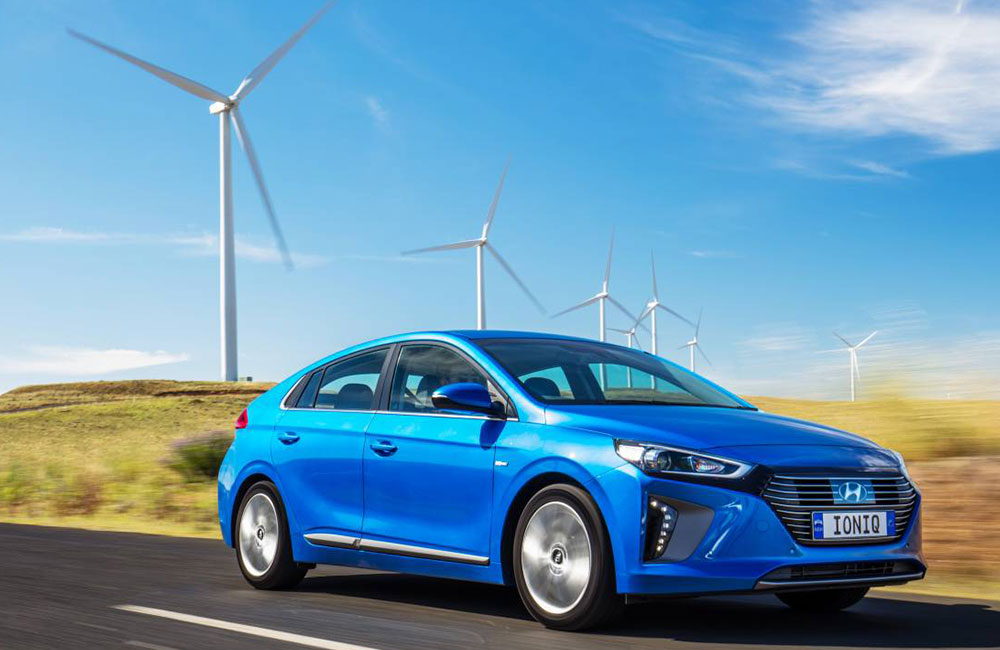 Mr Lee said the Accent light car was providing important, class-leading volume at 6841 sales so far this year (up 7.7 per cent), but it is an ageing model with no successor in sight as HMCA continues to look for a suitable replacement.

Production of the new-generation model is restricted to left-hand drive out of a new factory in Mexico, while the Australian business case for sourcing the European i10 and i20 does not stack up.

Mr Lee admitted that long-standing customer perception of the Hyundai brand being more focused at the cheaper end of the market was limiting its growth as its moves further upstream with every new-generation model.

“Personally, I want to see more growth but five per cent (year to date) for me is still okay because I don’t want to build up pressure on our dealers too much,” he said.

“The market situation and the environment is changing compared to two or three years back, and also our model line-up is changing. In earlier times, our company’s perception was with affordable cars, value-for-money cars – and the market perception is still ‘cheaper car’. 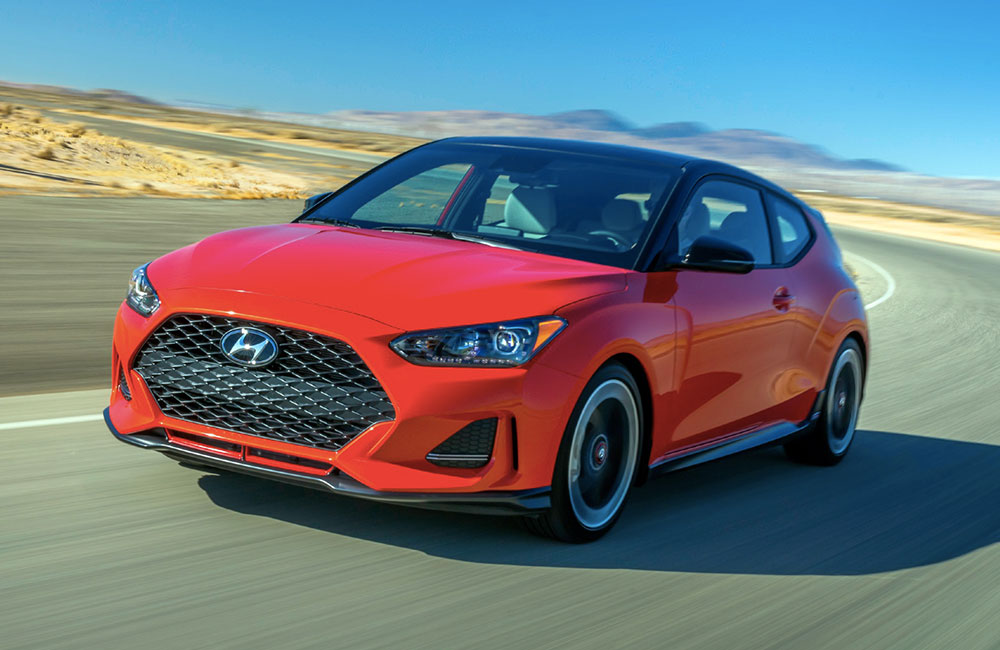 “With new models such as i30, i30 N, the Kona and this new Santa Fe, even though we are selling at the same level as two years back, or three years back, our model line-up is changing and we want to transition our perception from ‘affordable car’ to ‘a really good, quality car’ for our customer.

“Even though the volume is the same, I want to change our customers’ perceptions about the Hyundai brand.”

Further growth will come with anticipated future models such as long-awaited ute – a model line that sister brand Kia believes is worth around 20,000 incremental sales in Australia per annum – but Mr Lee believes the hard yards being put in now with brand value will take Hyundai to the “next level”.

“Within two or three years, by gradually changing our customer perception, maybe we will jump to the next level,” he said.

Asked whether a 10 per cent market share (around 120,000 sales) would be a suitable reflection of its “next level”, Mr Lee said: “Why not 10 per cent? All the time we have this strong anticipation and vision.”