SOME of the high-volume mainstream Japanese car-makers that have struggled in the Australian new-car market in recent years are reasserting themselves in 2015, with Honda, Mitsubishi and Subaru among the big-name brands winning strong support from new-vehicle buyers.

Toyota remains the dominant force in the industry by a huge margin, despite a 1.0 per cent sales decline so far this year, and Mazda is turning in consistently strong results to be the clear number-two brand with sales up 11.7 per cent to the end of September. But elsewhere among the leading brands, Honda’s sales have climbed a remarkable 28.9 per cent this year, and Mitsubishi and Subaru have both experienced 9.3 per cent growth.

For the improvers in the leading bunch, the turnaround is significant in the face of sustained sales pressure brought on by an increasingly competitive marketplace – particularly with the continued rise of South Korean brands Hyundai (+2.8% YTD) and Kia (+16.5%), and more affordable European alternatives including Volkswagen (+14%), Renault (+26.1%) and Skoda (+26.4%).

As we have reported, the major luxury brands such as Audi, BMW and Mercedes-Benz have also taken a bite out of mainstream Japanese brand sales with their new compact passenger cars and SUVs, while on the flipside the major full-import brands have clearly all taken customers from the local manufacturers, especially Ford (-16.0%) and Holden (-7.4% YTD).

Honda has not had much good fortune in recent years, with a cutback in spending in the wake of the global financial crisis impacting future product planning, leaving the company with a generally uninspiring line-up.

But this has changed in the past year, with the launch of the new-generation Jazz light car – now back to being one of the top picks in its segment (+64.2% YTD) – and the arrival of the reborn HR-V city SUV, which has proven to be an instant hit in a red-hot segment and is now the biggest-selling vehicle in Honda’s line-up, with 8158 sales YTD.

Mitsubishi, meanwhile, is climbing up the charts again after falling off the pace last year and recording lower-than-expected numbers between 2010 and 2013, hovering around the 56,000-62,000 mark during that period. 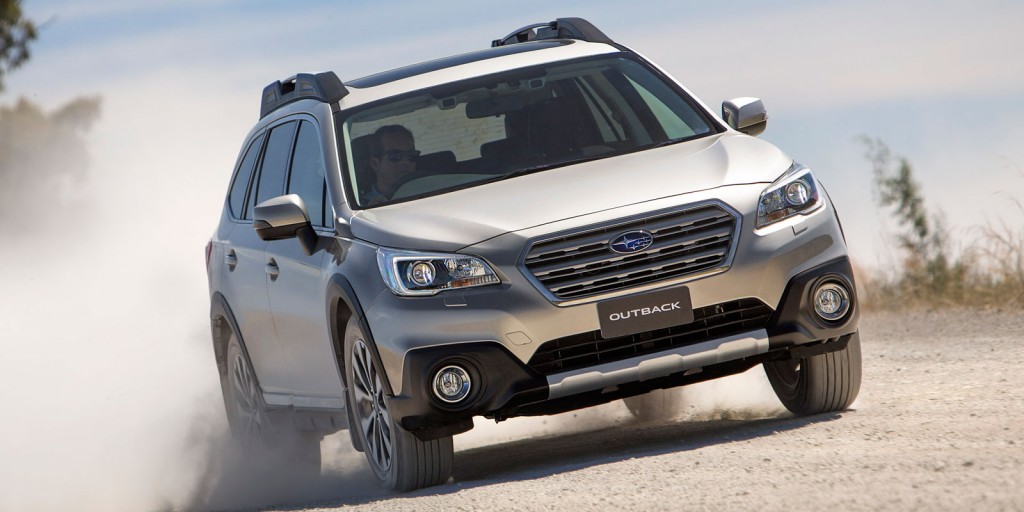 Outback saviour: The popularity of the new Liberty and Outback twins is keeping Subaru 9.3 per cent ahead of its 2014 year-to-date tally.

Mitsubishi Motors Australia Limited (MMAL) has since pulled back from this target, and earlier this year was working on 72,000 for the current Japanese financial year (April 1, 2015, to March 31, 2016).

For the 2015 calendar year Mitsubishi has already racked up 53,566 sales, with strong interest in the new-generation Triton pick-up – up 24 per cent in 4×4 sales YTD – and solid returns from its SUV line-up including the ASX crossover (+31.7 per cent), the soon-to-be-replaced Challenger (+62.2 per cent) and Outlander (+8.8 per cent).

Another big mover and shaker, albeit with a smaller line-up, is Subaru, which has seen huge interest in its new-generation Liberty and Outback twins – launched in January – after a lacklustre few years prior with the previous models that were simply not as appealing to buyers.

The Liberty is up by a phenomenal 291.3 per cent to 3103 so far this year to become the third-best-selling mainstream mid-sizer behind the Toyota Camry and Mazda6. Outback sales have grown by 326.6 per cent to 8177 units and is now the fourth-best-selling model in the sub-$70,000 SUV category behind Toyota’s Prado and Kluger, and the Jeep Grand Cherokee, which is retracting late in its lifecycle.

This performance is making up for contracting sales of the Impreza (-19.6 per cent) and the XV (-36.4 per cent), the latter now feeling the heat after a raft of new models have muscled their way into the city SUV segment, including Honda’ s HR-V and the Mazda CX-3.

As GoAuto has reported, Suzuki also has ambitious plans to reach 30,000 annual sales in Australia by 2017 – a figure it believes will come off the back of a line-up that will consist solely of small cars and crossovers, as per its latest global strategic plan.

The just-arrived Vitara is likely to have an impact in the crossover segment, having found 352 homes already after less than three weeks on sale.

Another smaller Japanese brand punching above its weight is Isuzu Ute, a manufacturer that has just two models in its line-up but is outselling established brands with five times as many offerings.

In March this year Isuzu Ute Australia managing director and CEO Yasuhiro Takeuchi announced a lofty target of 20,000 units in 2015 from its D-Max utility and MU-X SUV, and with 15,352 sold to the end of September, the target looks a certainty.

MU-X sales have increased by 39 per cent to 4698 units and it is now outselling established fare such as the Mazda CX-9, Kia Sorento, Mitsubishi Pajero and Challenger, as well as the mechanically related Holden Colorado 7, while combined sales of the D-Max 4×2 (+107.7%) and 4×4 (+15.4%) are at 10,654, edging out the Nissan Navara, Mazda BT-50 and Volkswagen Amarok to be the fifth-best-selling one-tonne ute in Australia.

With 47,860 sales YTD, Nissan Australia continues to claw its way back after a tough few years battling issues such as oversupply and an unsatisfactory model mix.

It is currently sitting in seventh place behind Ford, but Volkswagen – currently in crisis-management mode with the global diesel emissions scandal – is breathing down its neck on 46,846 sales YTD. 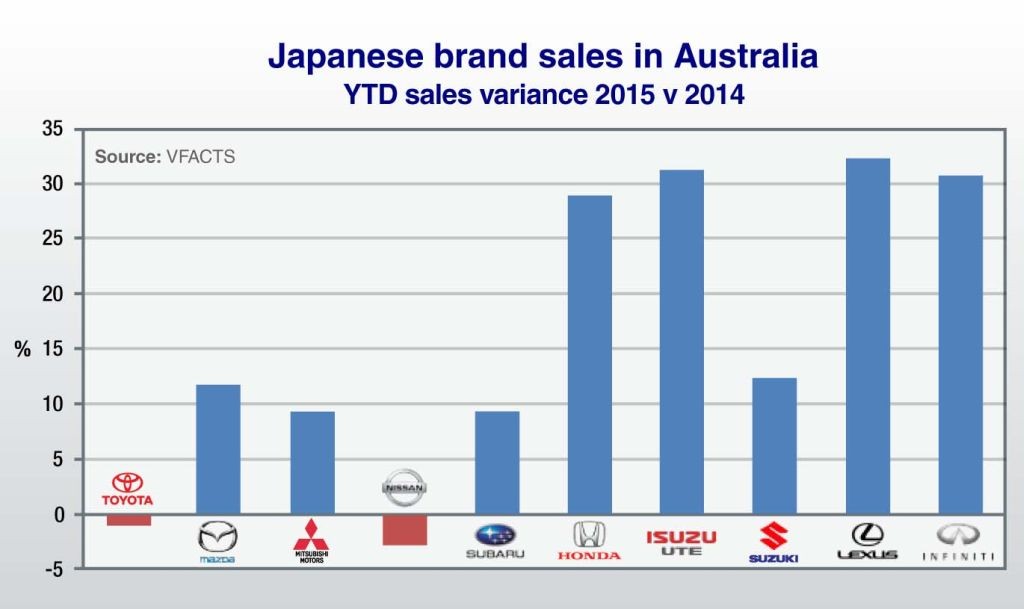 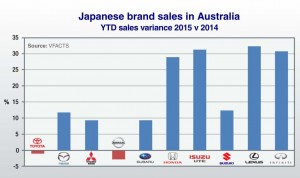