Kia gears up for new record

KIA Motors Australia (KMAu) is primed to end 2015 with record sales thanks to volume increases in key segments, and the confident Korean car-maker says it still has ambitions to be a top-10 brand in the coming years.

Kia entered the Australian market as a budget brand 19 years ago selling re-badged and re-bodied Mazdas, but the company has grown extensively and is now on the cusp of beating its best year of sales in 2012 when it shifted 30,758 units.

KMAu chief operating officer Damien Meredith said that the company’s growth would continue next year, before reaching the previously stated target of 50,000 units by 2020.

“Next year we are aiming for 38,000 cars, that is about an increase of 14 per cent,” he said at the recent Optima media launch in regional New South Wales.

Mr Meredith said Kia’s growth in the past 12 months would see it achieve its goal of entering the top 10 best-selling makes within the next two years.

For Kia to achieve a year-end top-10 placing it will need to displace either Honda or Subaru, both of which have experienced growth of their own in the past year.

This year, however, Subaru sales are up by 8.5 per cent, Honda has increased its sales by 28.4 per cent and Mercedes has grown by 15.7 per cent, leaving Kia with the tough task of sustaining its growth and outselling those three aggressive brands.

As well as stronger product, Mr Meredith acknowledged that Kia’s industry leading warranty was a major draw-card for customers.

“Our growth has occurred because we believe we have great models. There is no doubt our seven-year warranty has helped us dramatically in the Australian marketplace. That has allowed us to go on people’s shopping lists and, in many ways, it has redefined our brand.”

The Cerato has been the star of the Kia range this year in terms of sales, with an increase of 57.5 per cent over the first 10 months of 2014 with 8671 units shifted, not only making it the company’s top seller, but also ensuring it has outsold the likes of Mitsubishi’s ageing Lancer (7496), the Hyundai Elantra (7074), Nissan’s struggling Pulsar (6843) and the Ford Focus (5841).

While Mr Meredith said he was happy with the progress of the Cerato, he thinks it can perform even better, eventually entering the top-five best-sellers in the highly competitive segment. 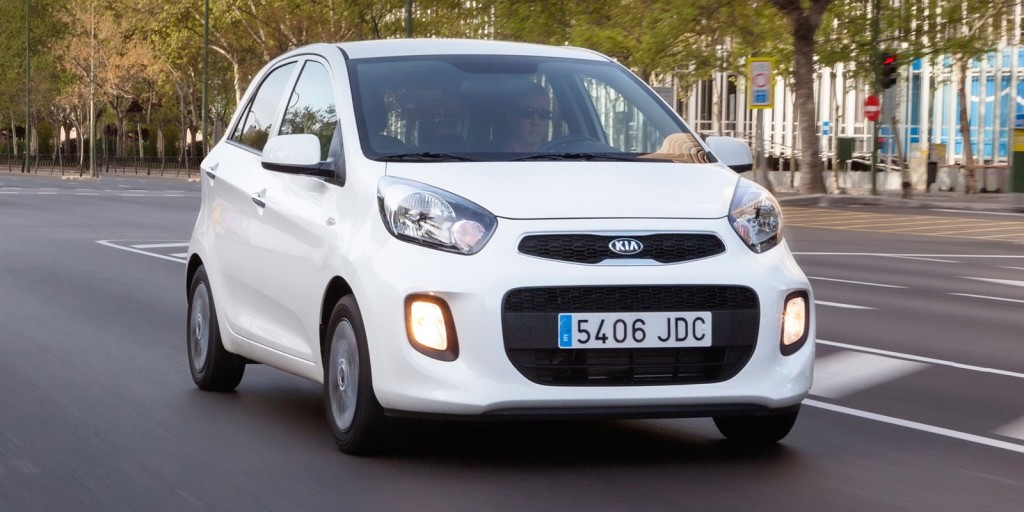 Little helper: Kia’s Picanto micro car will give the Korean car-maker about 3000 sales a year, according to KMAu chief operating officer Damien Meredith.

“When I first joined the company I looked at the communication that was happening and the figures and they weren’t good. But we just put together a better communications package and a solid offer and we have had consistency with that offer right through this year and that has helped dramatically,” he said.

“We have gone from 11th to sixth (place). That’s pleasing, but it is like anything, if we want to be relatively successful we have probably got to get that to number five. We get the update halfway through next year so it is a major change.”

The well received third-generation Sorento large SUV has seen a 23.3 per cent lift this year and Mr Meredith said he believes it can keep on building after a timid start.

“The good thing about Sorento is it is becoming stronger and stronger. It is a great car, it has had great write ups, great acceptance by (the media), dealers love the car and now the consumer is starting to come in on it. We are very happy with how it is going.”

Despite the Sportage compact SUV coming to the end of its life-cycle with the replacement due early next year, sales have increased by 18.5 per cent to 6426 units YTD, and is now outselling the Holden Captiva 5, Ford’s Kuga and the Jeep Cherokee in the tough mid-size SUV sector.

“Sportage has been a fantastic car for us. Truthfully the TVC we put together has worked. It gives Sportage instant recognition but it is probably time to move on in regards to the next communication message with new Sportage.”

Other models to experience growth this year include the Carnival people-mover, up 103 per cent to overtake the Honda Odyssey as Australia’s top-selling MPV on 2881 units, while the Pro_cee’d GT hot hatch is up by 12.3 per cent to 365 sales.

Conversely, there have been large drops for the Optima which has been in run-out, down 27.4 per cent, the Cerato Koup which has fallen by 53 per cent, and the slow-selling Rondo seven-seat MPV, which has dipped by 48 per cent.

Mr Meredith said there was “a lot happening” at Kia next year with the launch of the new Sportage, the arrival of the Picanto light car and a refreshed Cerato all expected to help increase its numbers.

“That will drive our volume increase for 2016 so we are in a pretty good position and shape in regards to organic growth, which is very important.”

Mr Meredith said there is potential volume to be achieved from the Picanto, despite a sharp drop in interest in the Australian micro-car segment in – it is down 30.6 per cent year to date – adding that it could attract similar sales numbers to the freshly launched Optima. 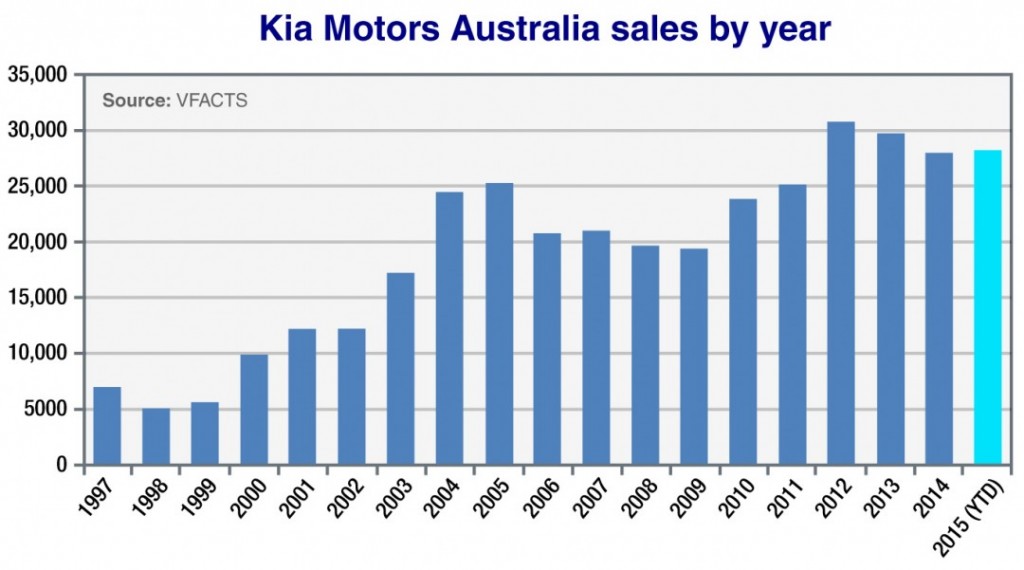 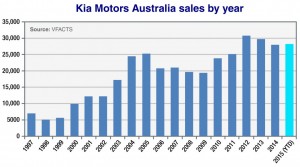