IN THE simpler years of the 1950s, an Australian pump distributor followed a tiny silver sports car through the Austrian mountains, chatted to the driver, visited the car’s production base and on a handshake with Ferry Porsche, bought the distribution rights to Australia and New Zealand.

Now, 70 years later, Porsche is celebrating its anniversary with planned events and more importantly, the release of a limited-edition model for Australia and NZ in a similar colour to one of the first of two cars imported in 1951.

The pump distributor was Norman Hamilton who imported two Porsche 356s – the first time Porsche had made a production run of right-hand drive cars – in Fish Silver Grey paint for the cabriolet and maroon for the coupe. Both cars are still on the road today and driven regularly by their owners.

In creating a special-edition model, Porsche Australia has chosen the new colour, Fish Silver Grey Metallic, developed by Porsche Exclusive Manufaktur to reflect the paint of the first 356 cabriolet.

The special-edition model will be a feature of the 2021 celebrations. The model, to be announced in the first half of 2021, has been a project bringing together the Porsche Exclusive Manufaktur department, the Style Porsche design team and Porsche Cars Australia (PCA).

Style Porsche director of special projects in Weissach, Grant Larson, said the special edition has been an exciting project for the Porsche team.

“It is fantastic that the new special-edition model for Australia will be based on an iconic, modern Porsche sportscar, but with a nod to the very first car we shipped to Australia all those years ago,” he said. 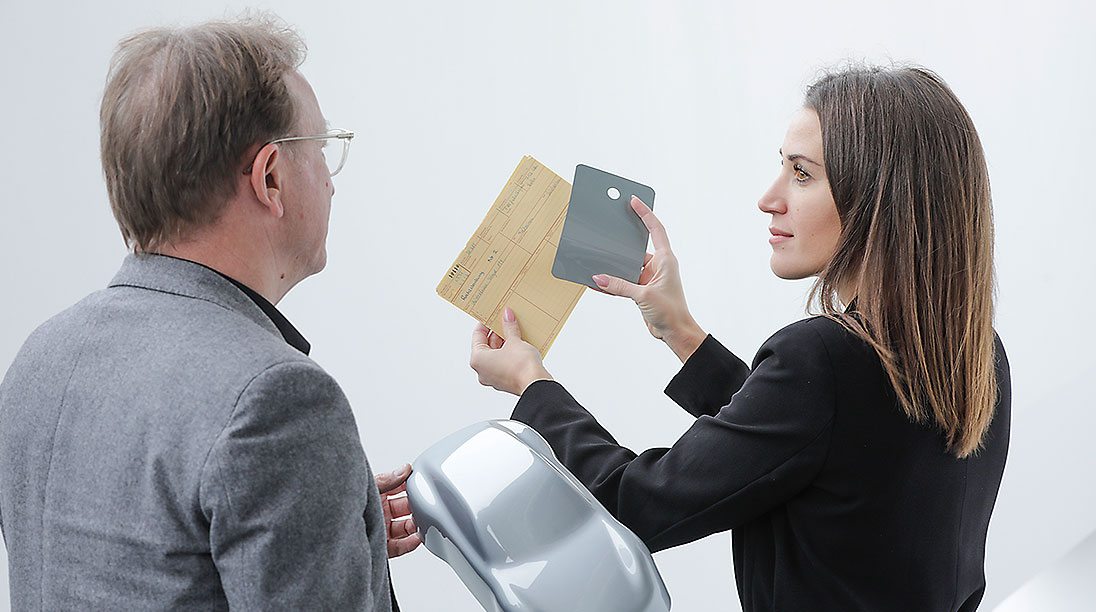 Grant Larson, Director Special Projects, Style Porsche and Daniela Milosevic, Designer Colour and Trim, Style Porsche, with the colour swatch for the new colour ‘Fish Silver Grey Metallic’, as well as papers from the production of the original Porsche 356 Cabriolet imported to Australia in 1951.

“It’s especially pleasing to hear that those first two cars, like most Porsches, are still on the road being enjoyed by their owners to this very day.”

PCA CEO and managing director Sam Curtis said Australia holds a special place in the history of Porsche, notably as the first right-hand drive export market and only the second export market after the US.

“2021 will be a special year for Porsche enthusiasts. It is fitting that we will celebrate 70 years in Australia just as we launch the Taycan, our first all-electric Porsche sportscar and a signal of the future of the brand,” he said.

Porsche AG member of the executive board for sales and marketing Detlev von Platen said Porsche and Australia have maintained a close bond and tradition.

“Our Australian fans are keen on everything Porsche’s DNA is about: sportiness, performance and an emotional design – this hasn’t changed in seven decades,” he said.

Celebrations started last weekend at Sandown Raceway in Melbourne, where a one-off non-championship event was held for Porsche motorsport competitors.

The event also had three sprint events for members of the Porsche Club of Victoria and displayed a Porsche Taycan pre-production vehicle for a speed comparison demonstration.

Porsche is also launching a photo competition via its @PorscheAus Instagram page. People are encouraged to upload images that creatively interpret the competition theme each fortnight, follow and tag @PorscheAus and use the hashtag #70YearsPorscheAus to be eligible for entry.

On offer are 70 minor prizes and the grand prize of a luxury getaway driving the new Taycan for up to three days. Further details are here, with additional information regarding 70 years of Porsche in Australia by following @PorscheAus on social media.