AUSTRALIANS aged 80-plus are now more likely to drive than 18-24 year-olds, prompting a new approach to selling – and making – cars.

The rise in vehicle sales to older drivers at the expense of younger motorists means some of the car manufacturing and selling traditions – from car designs to safety equipment, the much-lauded in-car infotainment technology, showroom etiquette and even the method of advertising – will have to be modified to meet the older customer base.

But it’s not just current drivers as research shows 30 per cent – representing about 750,000 – of the 2.3 million people planning to buy a new car in the next four years are aged 35-49 years. This is the same percentage as new-car buyers aged 50-64 years.

In the latest national data from Roy Morgan Research, the proportion of Australians aged 80-plus who drive has steadily increased to 69 per cent.

But at the same time, only 68 per cent of people aged 18-24 years are driving. As a percentage of the population, it shows older people are maintaining their motoring lifestyle.

But numerically, the volume of 18-24 year-olds on the road is significantly larger than the older group. 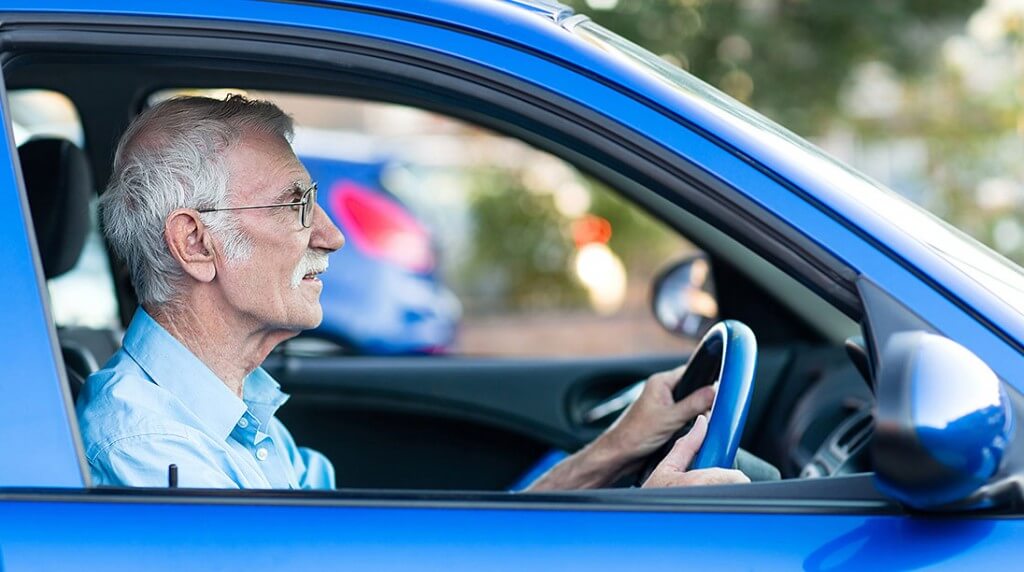 As a way of measuring the trend, however, it shows that the number of young people taking to the streets is continuing to fall.

Roy Morgan Research’s industry communications director Norman Morris said most car commercials on television give the assumption that all drivers are aged in their mid-30s.

“But Australians aged 65-plus are today around 50 per cent more likely to intend to buy a new car in the next four years than they were in 2007,” he said.

“There are, in fact, almost as many of these buyers across the country as there are 25-34 year-olds in the market.

“Compared with the norm, older buyers are more interested in buying new small or medium passenger vehicles, with intentions well above the norm to get themselves a new Mercedes-Benz, Kia or Honda.”

Roy Morgan said the interest from younger Australians to drive has been dwindling since 2007 but last year was the turning point as the older set – the Silent Generation (born 1924-1942) – outdrove the Gen Y (or Millennials, born in the early 1980s until the early 2000s) youngsters.

But it is not just the book-ends of driving ages that is shifting – even segments in between have changed their emphasis. 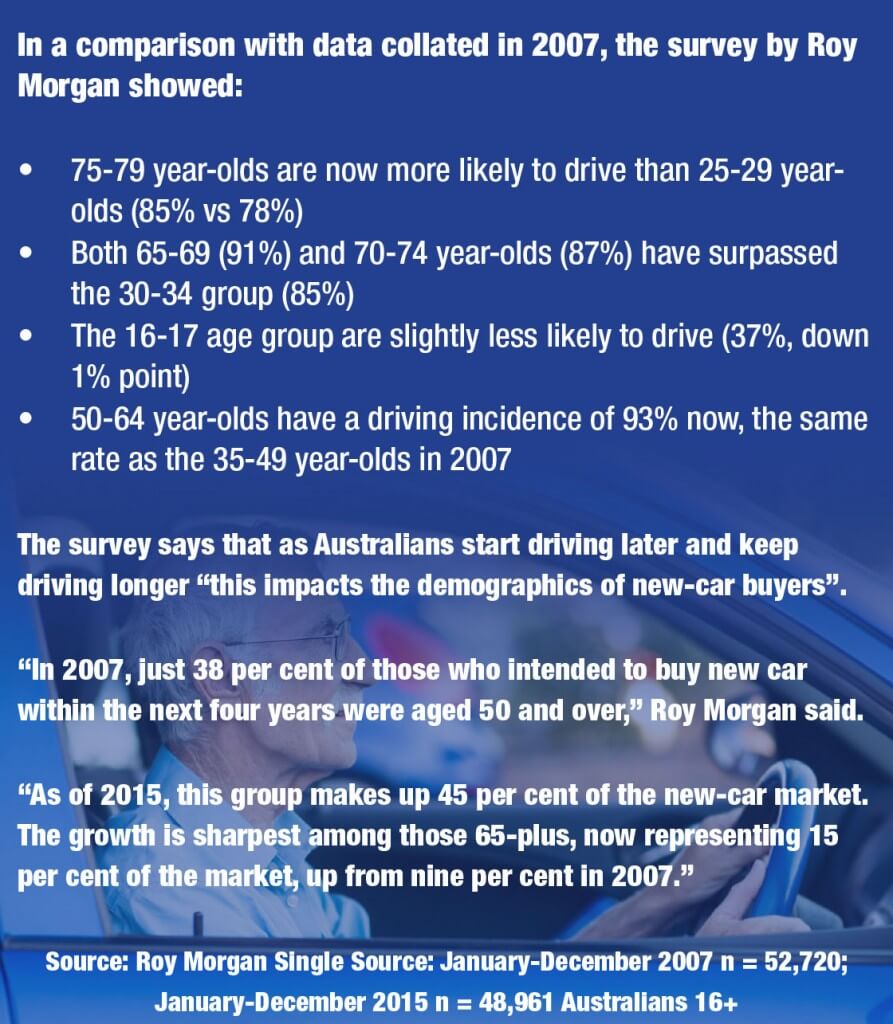 … But fatalities rise for older drivers

AUSTRALIA’S 75 year-plus drivers have a higher risk (per distance travelled) of being killed in a crash than any other age group, according to the Victorian Transport Accident Commission.

It reported last year that as the driving population is ageing, it brings more risk that older drivers are becoming more liable of being killed or seriously injured on the roads.

But the data does not show that the death and injury rate was higher mainly because the elderly drivers were too frail to survive their injuries or needed hospital attention for often less threatening injuries.

While the risk of crashes in young drivers is risky driving behaviour, TAC said in older drivers it is increased frailty and issues associated with ageing that create the risk.

TAC said age should not be a barrier to safety on the roads, but older drivers and their families should remain aware of their health and limitations.

TAC chief executive officer Janet Dore said in a statement that older drivers are much better at picking up on the signs that they may not be as safe behind the wheel than they once were.

“In most cases, they will self-regulate,” Ms Dore said.

“That could mean deciding not to drive at night or not driving at peak hour when traffic conditions are more complex to navigate.”

Between July 1, 2014, and June 15, 2015, 21,014 Victorian drivers aged 71 or older had their licences suspended or cancelled after failing a VicRoads medical assessment. The figure had increased from 19,745 the previous financial year.

“While it may be true that the number of older drivers having their licence taken away is increasing, that needs to be viewed in the context of our ageing population and the fact that there are a lot more older drivers now on the roads,” Ms Dore said.

Ms Dore said decades of driving experience meant the vast majority of older drivers were capable behind the wheel. They were also less likely to take risks than younger drivers.

“One of the main reasons for the elderly being over-represented in road trauma is that their bodies are frail, meaning relatively minor impacts can result in hospitalisation.” 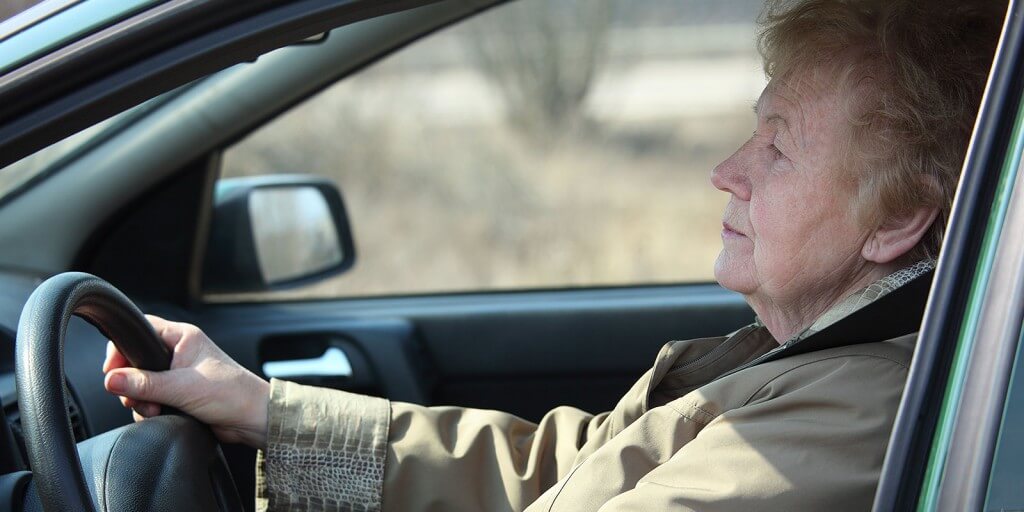