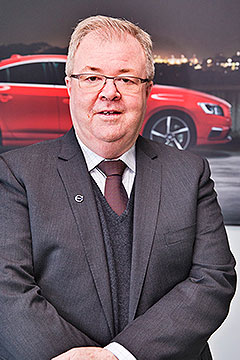 On the move: Kevin McCann has left Volvo Car Australia after steering the company for the past three years.

Mr McCann had overseen the Swedish brand in Australia for the past three years, replacing Matt Braid who stepped down in similarly unexpected circumstances in September 2014 but resurfaced a few months later as commercial director of Australia’s premier motorsport category, Supercars.

VCA sales director Stephen Connor has been appointed acting managing director while a recruitment process gets underway for Mr McCann’s replacement, with a spokesperson telling GoAuto this week that it was too early to tell whether his successor would be sourced from within Volvo Cars or recruited from outside the company.

Now reporting to Volvo Car Group’s Asia-Pacific president Jari Kohonen, Mr Connor joined the company in May this year from Kia Motors Australia and has more than two decades’ experience across OEM and retail automotive sectors in Australia and abroad.

He spent five years at Kia as national sales manager and, subsequently, general manager of sales, after a year as dealer principal for a number of franchises (including Subaru, Suzuki, Isuzu and Skoda) at Adelaide-based Jarvis Group.

Earlier in his career, Mr Connor worked in the Middle East managing the marine division within the OMZEST Group in Oman, he briefly managed the Perodua and Piaggio brands in the United Kingdom and spent some 21 years with Volkswagen, initially in the UK in network-related roles but later as head of used cars in a role spanning Europe.

Mr McCann’s next move remains the subject of speculation amid a string of senior management departures in the industry in recent months.

He will bring almost 40 years’ experience to the next position, having worked for a broad range of car companies including Hyundai Motor Co Australia, BMW Group Australia and Inchcape Australia (Subaru) in senior sales and marketing roles.

Among his overseas experience, Mr McCann was engaged by Audi AG in the mid-1990s to establish sales and marketing operations in several Asian markets, and subsequently led the establishment of the Audi brand in China and spent a further three years as managing director of the Volkswagen Group in Singapore.

He later returned to the VW Group as executive vice-president of the Volkswagen brand at the FAW-Volkswagen joint-venture sales company in China.

In a statement, VCA said: “Volvo Cars thank Kevin for his efforts over his years of service with the company and wish him well with his future endeavours.”