Once the dominant force in ute sales, 4×2 pick-ups are fading to black

DECLINING sales of rear-wheel-drive utes in Australia have continued apace as more tradies and weekend warriors demand high-riding light trucks with 4×4 traction, whether they need these attributes or not.

Just 14 years ago, 4×2 utes accounted for more than half of all pick-up sales, with the locally made Holden Utility and Ford Falcon Ute dominating proceedings, each with a 23 per cent share of the 4×2 segment.

So far this year, 4×2 utes make up just 14.1 per cent of all pick-up sales, with the Holden and Ford locally made utes nowhere to be seen after the demise of local manufacturing in 2016 and 2017.

And although overall utes sales have soared since 2005 – up by almost 70,000 units or almost 50 per cent – all the growth has been in 4×4 pick-ups, mainly of the Japanese-branded, Thai-manufactured variety.

The death of the locally manufactured utes only partly explains the phenomenon, with the off-roading craze, the advent of family friendly five-seat dual cab bodies, ever-higher specification levels, building boom and fashion all playing a part. 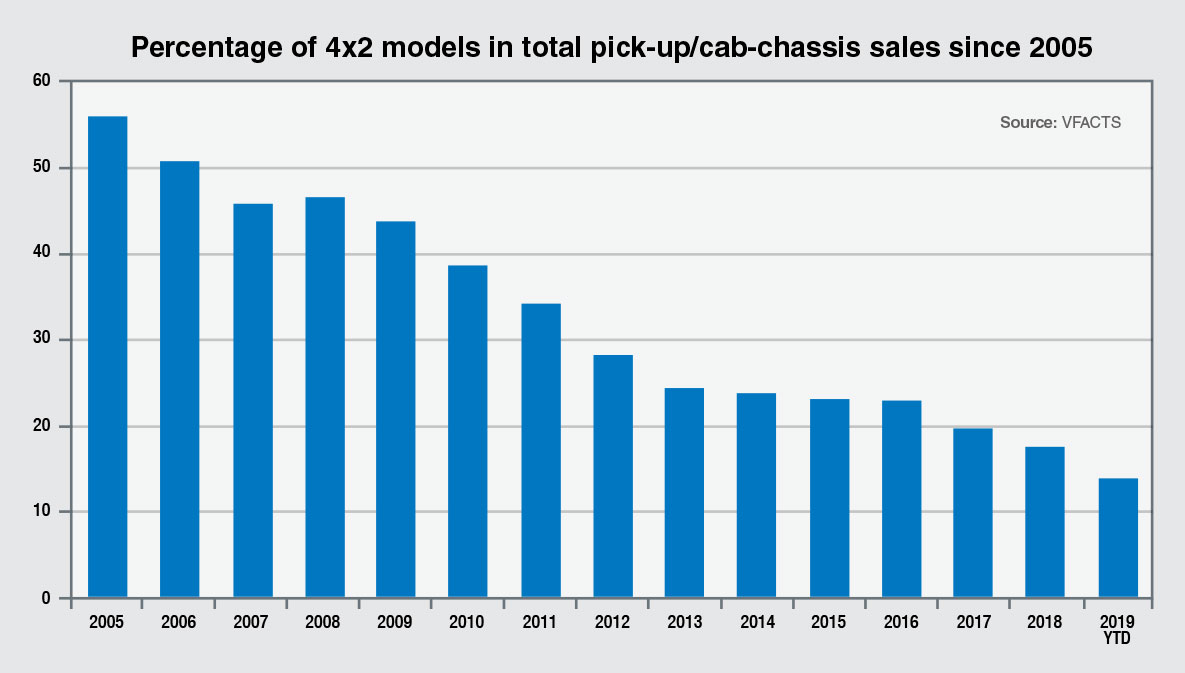 Why have a four-wheel-drive SUV and a ute when you can have it all in one vehicle that serves as workhorse during the week and off-roader at the weekend?

The buyers are seemingly happy to fork out thousands of dollars extra for the privilege of 4×4, even when most of these vehicles rarely leave the bitumen.

Toyota’s HiLux has ridden this wave to perfection, rising to become the number-one seller in Australia, ahead of arch rival Ford Ranger.

But better than most, Toyota has held onto a good proportion of its 4×2 sales, with 13,125 units last year representing a 34.8 per cent chunk of the basic rear-wheel-drive workhorse action.

By comparison, Ford Ranger’s share of the 4×2 ute segment last year was 14 per cent.

Some manufacturers have given up on the 4×2 segment, with Chinese manufacturers LDV and Foton mothballing their rear-drive models and focusing on 4x4s instead.

Volkswagen’s Amarok 4×2 variant has achieved just 40 sales this year to the end of July, compared with 4845 for the 4×4 variety.

While overall 4×4 pick-up sales are holding up well so far this year with a decline of just 1.2 per cent in the seven months to the end of July, 4×2 ute sales are down a hefty 9.5 per cent, showing that the trend is far from over.