Hydrogen: stacks on the cards

WHILE manufacturers like Volkswagen and Mercedes-Benz have gone all-in on battery-electric vehicles, Hyundai Motor Group’s recently announced Hydrogen Vision 2040 strategy firmly endorses a future where hydrogen fuel cells do much of the heavy lifting in the transport sector.

There are several key objectives of Hyundai’s latest strategy, the broadest of which is to reduce the company’s total carbon emissions to 75 per cent of what it emitted in 2019 by the year 2040, with that number dropping to net zero by 2045.

While battery electric vehicles (BEVs) like Hyundai’s expanding Ioniq family will play a large part in reducing the group’s emissions, the burden will also be shouldered by hydrogen fuel-cell vehicles (FCEVs).

FCEV technology has been in road-going cars since the 1990s, Hyundai commencing its own research into fuel cells in 1998.

In 2013 the company put a Tucson/ix35-based FCEV into limited production using its first-generation fuel cell and followed it up five years later with a second-generation cell in the Nexo SUV – an exclusively hydrogen-powered model.

But the limited availability of hydrogen refuelling infrastructure and the high cost of FCEVs themselves have allowed BEVs to take an early lead as the alternative fuel of choice.

As far as pathways to an emissions-free future are concerned, the battery-electric vehicle is a more convenient road for the world’s automakers to travel – and the accelerating rollout of production BEVs is evidence of that. 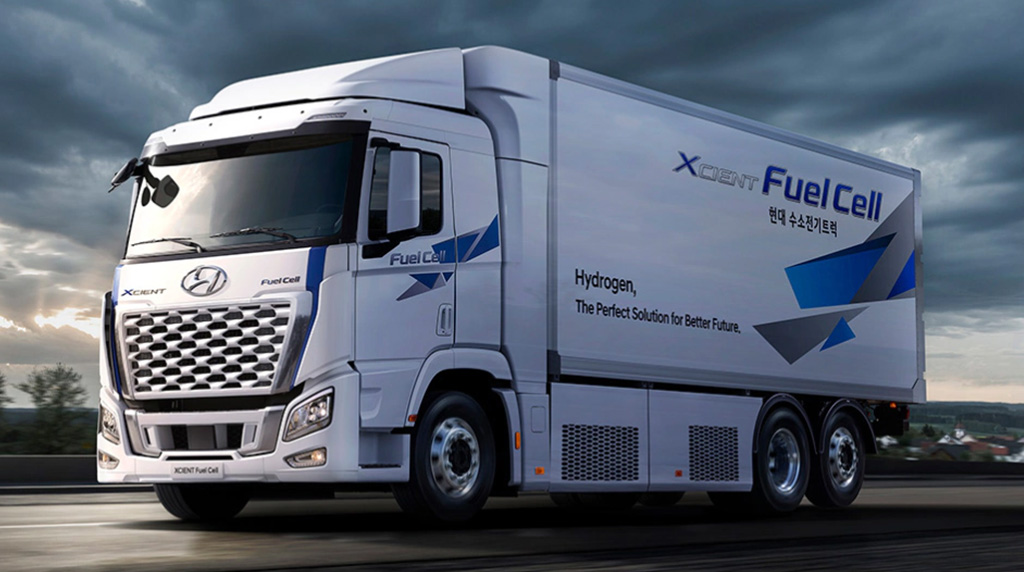 But for Hyundai, BEVs are not a one-size-fits-all strategy. As part of its mission to speed up adoption of hydrogen fuel cells, Hyundai Motor Group will first target the commercial vehicle sector by phasing out its combustion-engined trucks, vans and buses by 2028, replacing them with a mix of BEV and FCEV alternatives.

For Hyundai, fuel cells make the most sense when applied to heavy commercial vehicles, which emit more CO2 than passenger cars and require longer driving ranges.

Without the weight penalty of a battery impinging on payload, coupled with the speed of filling up a hydrogen tank versus charging up a large battery pack, Hyundai sees an FCEV truck as the most elegant alternative to the turbo-diesel prime movers used today.

Because large trucks largely operate on a hub-to-hub driving cycle, they are also less dependent on an expansive refuelling network – as long as enough refuelling stations are clustered around logistics hubs and the major routes between them, these should be sufficient for FCEV trucking to become practical.

These trucks have so far logged more than 210,000km per month, with the experience gained to be fed back into Hyundai’s future FCEV trucks. Hyundai Australia reports that “various industry and government partners” have expressed interest in the Xcient Fuel Cell, but there is nothing to report on a local trial so far.

At the announcement of its Hydrogen Vision 2040 strategy, Hyundai also unveiled its third-generation fuel cell technology.

Lighter and more compact than the second-generation fuel cell that powers the current Nexo – Hyundai’s only production hydrogen car – the third-gen fuel cell stacks are built with both modularity and lower production costs in mind.

Two versions are offered; a 100kW stack and a 200kW stack. The former is comparable to the unit that powers the current Nexo but measures roughly 30 per cent smaller and is easier to package in a wider range of vehicles. The 200kW unit is fractionally larger and more suited to commercial vehicle use but both can be combined to scale total energy output up as required.

“By using two systems for trucks we can provide around 350kW, which is equivalent to the power of current diesel engines”, said Hyundai senior vice president Sangyup Lee.

In fact, Hyundai touts the ability to daisy-chain ten 100kW units together to create a 1MW power station, suitable as a backup power source for large ships, server farms, hospitals and other facilities that need constant power. 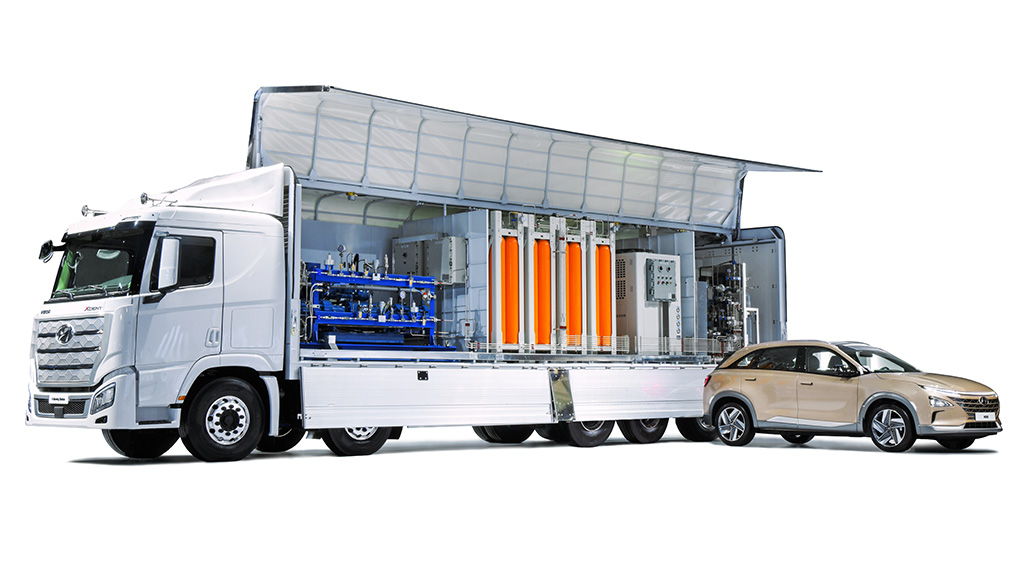 A flattened-out version of the same stack technology was also revealed, which is packaged to measure no more than 25cm high. The “Full Flat System” is offered as a more easily integrated power source for people movers, buses and trams, or any other application where a low floor is desirable.

A fuel cell version of the recently launched Staria will arrive alongside the next-generation Nexo in 2023, but for the first half of this decade Hyundai will be focusing on growing its commercial FCEV showroom.

In 2024 a fuel cell tractor will arrive but a broader passenger FCEV range for Hyundai, Kia and Genesis will not roll out until 2025 at the earliest.

By the end of the decade though, Hyundai expects that it will be able to achieve the economy of scale necessary to make FCEVs a viable option for motorists.

Under Hydrogen Vision 2040, Hyundai is planning on its FCEVs to be at price parity with contemporary BEVs, eliminating a major pain point for consumers.

Durability is also expected to improve, with Hyundai targeting a 500,000km service life for its commercial vehicle fuel cells and a 50 per cent improvement for passenger models.

Yet Hyundai’s renewed focus on fuel cells will not be to the detriment of its battery electric efforts; both will continue to be developed in parallel, giving the company the flexibility to adapt to future demand as it presents itself.

“We take this as a complementary approach,” said Hyundai Motor Group chief of research and development Albert Biermann.

“We will see both, fuel cell EV and battery EV. It’s hard to (predict) a share at this point in time, but we are preparing both ways”.

Hyundai’s plan is about more than just road transport. The company predicts that while hydrogen has yet to make sense for private motorists, it holds significant advantages for industry and the energy sector.

Surplus energy generated by renewable sources can be stored in tanks of hydrogen rather than in material-intensive chemical batteries, freeing up those raw materials for other things, while energy can also be exported and imported in the form of hydrogen, effectively replacing liquid hydrocarbons for countries that need to import their energy from elsewhere.

In such a hydrogen economy, the viability of FCEVs becomes more secure.

Locally, however, the infrastructure question is one that has yet to be comprehensively answered.

“Infrastructure is still one of the biggest barriers to a high level of FCEV deployments in Australia,” said Hyundai Motor Company Australia senior manager of future mobility Scott Nargar.

“We are expecting the Brisbane H2 station to be operational in Q4 this year and an additional station in Perth and Melbourne next year. HMCA is currently involved in discussions with various government and industry partners for more hydrogen stations across Australia.”

While only 28 Hyundai Nexos are currently on Australian roads, the Korean automaker’s local arm is keen on seeing more Hyundai FCEVs join them.

“We’re interested in all new products introduced globally and the Staria FCEV is no different,” Mr Nargar continued.

“We can see a zero-emissions Staria variant as being incredibly practical and useful in all kinds of applications, including government and corporate fleets.

“We look forward to seeing further developments of H2 refuelling infrastructure across Australia to help support future Hyundai FCEV deployments including the next generation Nexo.”

While it is still early days for hydrogen vehicles and significant hurdles remain, Hyundai is nevertheless forging ahead with its plan to popularise FCEVs. For the company’s leadership, the environmental imperative is too great to ignore.

“So we decided to lead this change, which is absolutely critical for our sustainable future.”

It is a sentiment backed up by Dr Saehoon Kim, the company’s executive vice president and head of its fuel cell centre.

“We have to reach the target of carbon neutrality, there is no other way,” he said.