KIA and Mitsubishi were the winners – barely – among the sales leaders in the Australian motor industry at the halfway point of a disappointing 2019.

They were the only companies in the top 10 to gain sales in the six months to the end of June, with all the others struggling to match last year’s figures for a variety of reasons, including Australia’s stuttering economy.

As our graph shows, the biggest loser has been Holden, with sales down 24.5 per cent as it struggles with life after manufacturing. 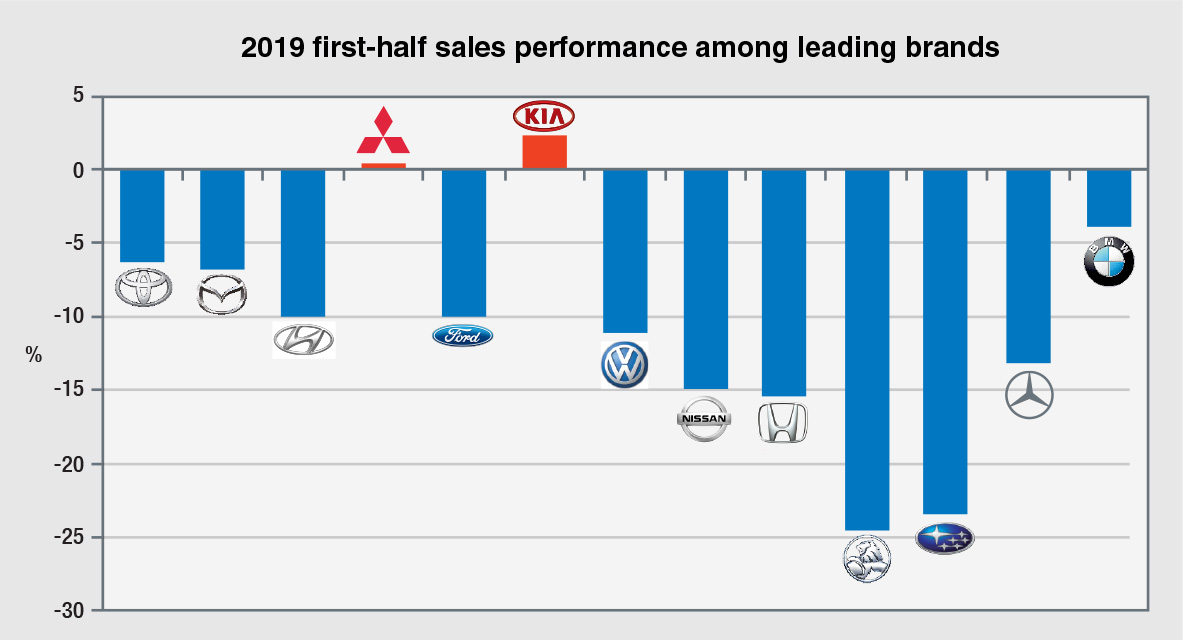 By contrast, fellow former manufacturers Toyota and Ford are getting on with business, and while sales declines of 6.3 per cent and 6.7 per cent respectively for these companies are not ideal, they are at least ahead of the market which has plummeted 8.4 per cent in the first half.

Seemingly bulletproof Toyota has picked up another chunk of market share, moving up from 18.5 per cent at this time last year to 18.9 per cent on June 30, to again hold market leadership by the length of the straight.

With 104,773 Toyota-brand vehicles (not counting Lexus) already sold, it can pretty much pencil in another 200,000-unit year and start writing the acceptance speech for the HiLux’s victory in the race for top-selling vehicle honours.

Closest rival Mazda has watched its sales slip 6.7 per cent, but like Toyota, that is better than average. Part of this decline can be sheeted home to an 11 per cent decline in sales of the best-selling Mazda3 small car as a new model is settled into the market.

Third-placed Hyundai – the company seen by many as the brand most likely to disturb Toyota’s cosy spot at the top – has slipped backwards by 10 per cent.

While Hyundai’s best seller, the i30 small hatchback is kicking goals, other compact passenger cars, including the Accent and Elantra, have taken a hit, with sales down 18.8 and 34.3 per cent respectively.

Hyundai’s decline has placed it in danger of being overtaken by a resurgent Mitsubishi, which is now just 914 units behind the South Korean company, 44,941 to 44,027.

Mitsubishi might have even closed the gap in June except for faltering sales that month, down 13.1 per cent, mainly due to slower than usual sales of its number-one seller, the Triton ute. The 4×4 Triton took a 35 per cent hit when compared with June of last year. 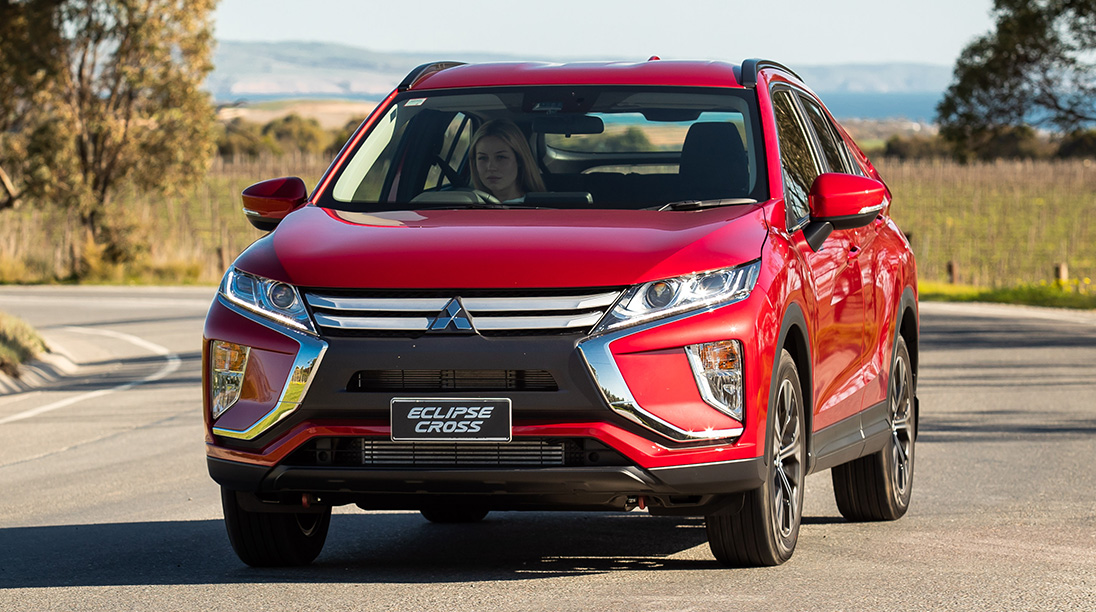 Cross up: The Eclipse Cross is one of four Mitsubishi SUVs to gain volume this year, propelling the Japanese company’s overall sales into the black.

However, Mitsubishi has made every post a winner with its SUV sales which are up 9.6 per cent for the year.

Fifth-placed Ford has managed to steady the ship after a precipitous fall down the sales ladder in recent years after the loss of the locally built Falcon and Territory from inventories.

The arrival of the new Endura large SUV in recent months has helped somewhat, although the strong and consistent performance of the locally developed Ranger pick-up is the real feather in the Blue Oval’s cap.

Sales of Ranger – the number-two seller in the land – are running line-ball with 2018, even though economic conditions are not conducive to sales of such vehicles that are heavily reliant on a good business outlook.

The big mover in the Australian market this year has been Kia, which is now fewer than 2000 units behind Ford after overtaking Holden since this time last year.

With sales up 2.3 per cent year to date, Kia has swum against the tide by lifting sales of passenger vehicles when everyone else is giving up on them and taking the SUV route.

Kia’s armoury will only get stronger from October when the new Seltos small SUV – its first in that bracket – is due to go on sale in Australia. 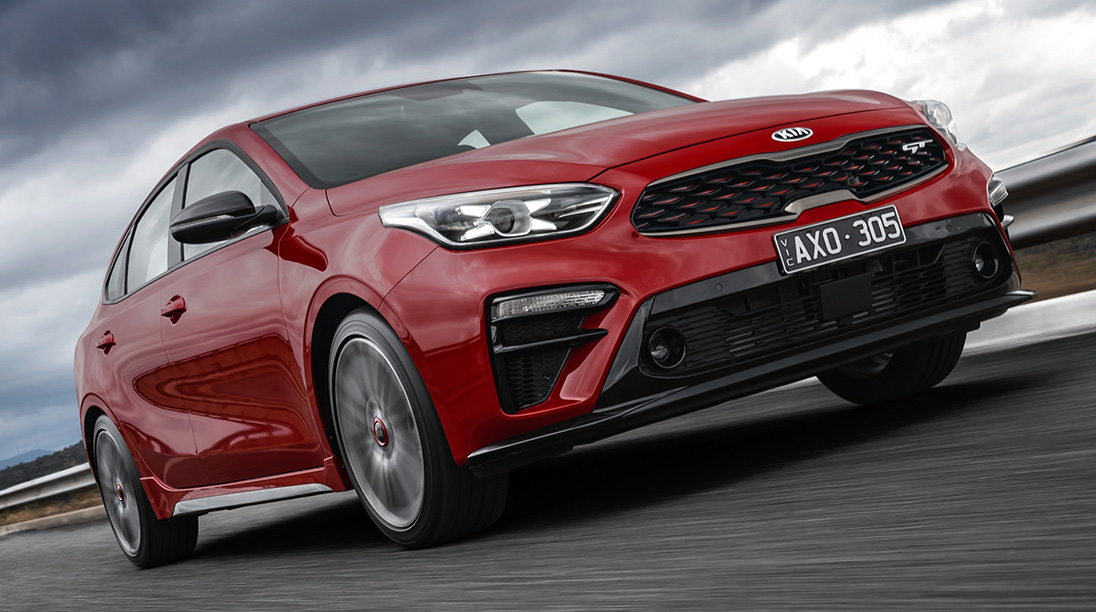 Among those shifting its marketing efforts to SUVs and LCVs is Holden, but so far the move has paid few dividends with its overall sales down 24.5 per cent.

In fact, June’s sales decline for Holden was even worse – down 34.8 per cent – which would indicate that, unlike Ford, it has yet to find the bottom of the quicksand.

Holden has slid from sixth place last year to 10th this year, being overtaken by Kia, Volkswagen, Nissan and Honda.

If it wasn’t for well-documented stock shortages at 11th-placed Subaru this year, Holden might have slipped out of the top 10 altogether.

Subaru has regained some of its mojo in the past two months, turning an embarrassing 33.8 per cent decline into a more manageable 23.5 per cent hit.

Among the luxury brands, Mercedes-Benz Cars still rules the roost with 15,790 sales for the first six months, but that represents a 13.3 per cent fall, at least partly due to stock shortages from stinkbug contamination and diesel certification hold-ups.

Rival BMW has managed to make up some ground, suffering only a 4.0 per cent sales drop year to date to report 12,387 registrations compared with Mercedes’ 15,790.

By contrast, the other German company, Audi, has slipped further behind with sales down 32.2 per cent to just 7198 year to date.