IT SEEMS a paradox, but spending money on advertising and marketing in a recession increases the chance of a business improving long-term profits and being able to ride out the downturn.

There are many studies on recessionary influences on a market in recession – or depression – such as the current environment of flagging sales, weak customer attention and the social and financial effects of the COVID-19 virus.

One of the most widely read studies is the 1990 work of US researcher and later executive director of the San Francisco-based Ogilvy Centre for Research and Development, Alex Biel, and partner Stephen King, more recently the managing director of economics at banking group HSBC.

The study, ‘Advertising During A Recession’ (Alex Biel and Stephen King, 1990), looked at businesses that substantially increased their advertising budgets.

“Those advertisers who increase spending – whether modestly or aggressively – achieve greater market share gains than those who cut their advertising investment,” the authors said.

“This, in turn, puts them in a better position to increase profits after the recession.”

It found that maintaining brand awareness was fundamental to successful sales – especially during a recession.

In 2009, Toyota US head of marketing and planning, George Borst, said that as the US slumped into a recession as the global financial crisis hit, he saw positives. 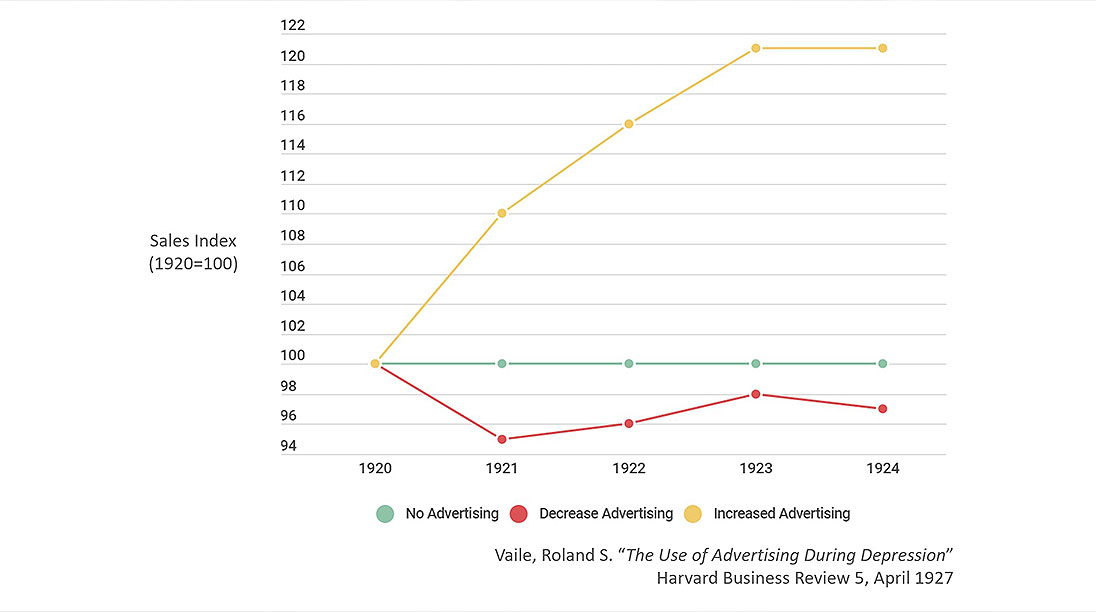 “We see this as a time to strengthen the brand image of Toyota,” he said.

“Toyota has posted a healthy increase in its fourth-quarter spending.

“You really need to spend when the chips are down, and you can really lose a lot if you let the momentum get away from you.”

The comments were backed also by US-based marketing professor Gerry Tellis and his (then) undergraduate son Kethan who produced a report ‘Research on Advertising in a Recession: A Critical Review and Synthesis’ in 2009, again during the GFC.

It found that most firms tend to cut back on advertising during a recession.

“This behaviour reduces (advertising) noise and increases the effectiveness of advertising of any single firm that (still) advertises,” the authors said.

“Thus, the firm that increases advertising in this environment can enjoy higher sales and market share.

“When the economy expands, all firms tend to increase advertising. At that point, no single firm gains as much (as during the recession).

“The gains of the firms that maintained or increased advertising during a recession, however, persist.

“It is a simple, but strong, refutation of the theory for cutting back on advertising during a recession.”

In a follow-up report to his 1990 study, Mr Biel in 2008 said that during recessions, consumers tended to stay home more and, as a result, their consumption of media, be it print or electronic, increased. 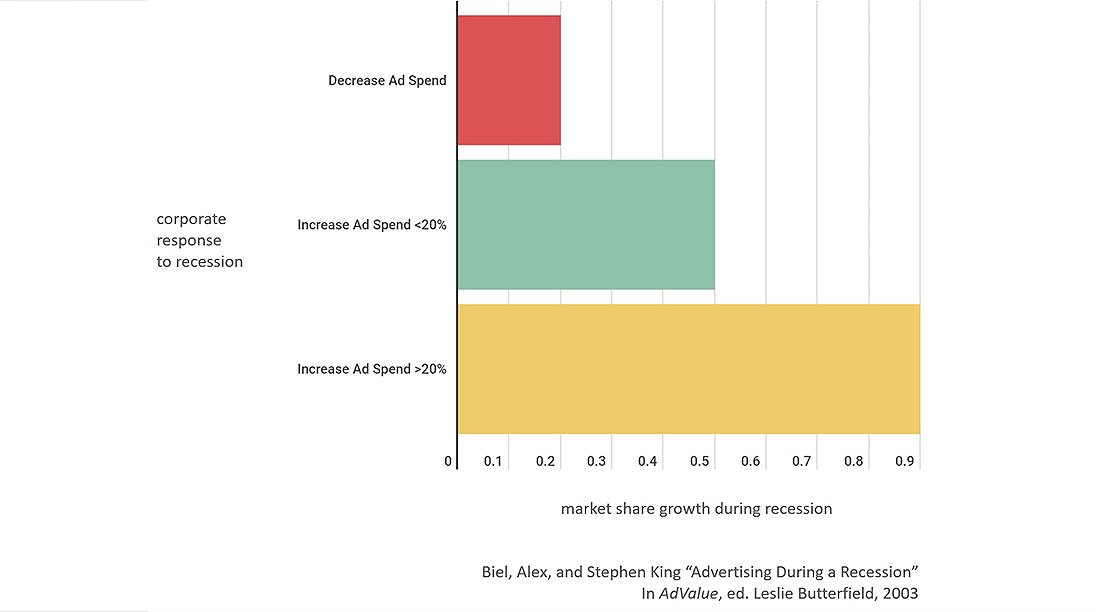 “And media (for advertisers) often becomes more attractive and affordable during the softer advertising market which accompanies recession,” he said.

“It also tends to amplify the relative perceived quality of the brand, which in turn increases the brand’s value for money.”

The data used by Biel and King in their 1990 study indicated that consumer marketers who increased spending by an average of 48 per cent during a recession won virtually double the share gains of those who increased their expenditures more modestly.

These studies on advertising and marketing during a recession owe their existence to the first proper analysis of increased advertising in a recession that was produced by Roland Vaile in 1927 from the effects of the global economic downturn that occurred after the Great War.

Since that study, and despite examples from different industries in very different recessions, each following study confirmed that maintaining or even increasing ad spend during a downturn is the right thing to do because it sets a company up to survive the downturn (a little) and then prosper (a lot) in the period that follows.