Another Audi dealership opens up in Brisbane, this time in Springwood

AUDI has officially opened its new $16 million Springwood dealership in Brisbane’s south on the back of strong sales in the sunshine state.

Owned by James Frizelle’s Automotive Group, the new site officially launched this week with a gala event attended by 500 guests, including some of Audi’s Australian celebrity ambassadors.

The new facility covers 3000 square metres and features a new-car showroom with a capacity of 17 vehicles, as well as room for 24 pre-owned vehicles in a special display space and 16 service bays.

The Springwood site is the second new Brisbane dealership to open its doors in the past year, following the Indooroopilly facility.

It is also not the only prestige brand to set up a retail presence in the area of late, with Lexus opening its Springwood site late last year.

The car-maker said the area was identified as a growth area, particularly given that more than 200,000 drivers use the Pacific Motorway every day.

Audi experienced a 27 per cent lift in sales in Queensland last year compared with its 2014 haul, exceeding its national year-on-year growth which hit 20.1 per cent in 2015.

“Audi achieved its 11th year of consecutive sales growth in 2015 and over this time, the brand has increased its volume five-fold,” he said. “We see Queensland, and in particular growing market areas like Springwood, as critical to our continued development.

“New facilities like Audi Centre Springwood are opening as a result of our ongoing brand success, and not only will the new dealership help to drive up Audi’s profile in Queensland, it will also cement our reputation for delivering best-in-class customer service.”

Dealer principals at the centre will be Brett and Rebecca Frizelle, with Tania Meli as general manager, Marty Bordignon as sales manager and Craig Antliff as service manager. 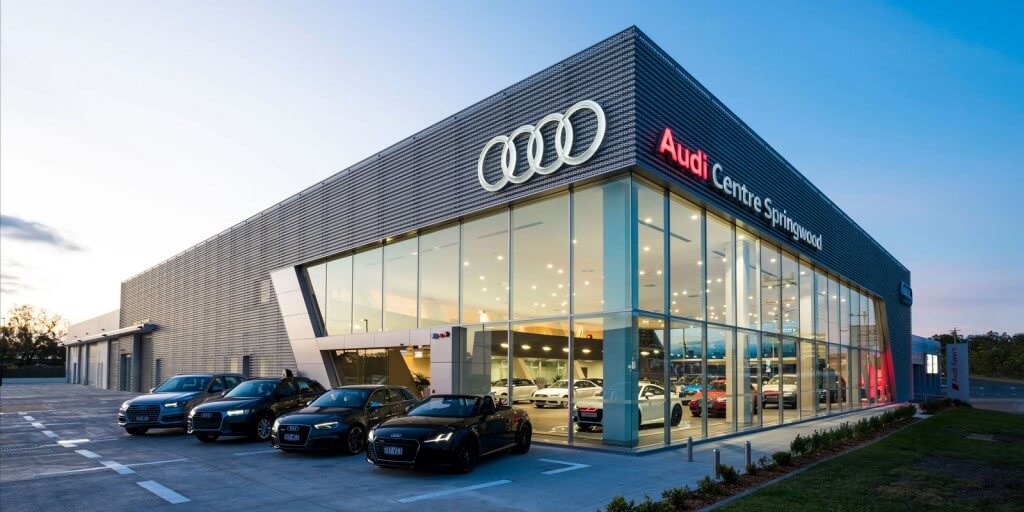 Spring break: The $16 million Audi Centre Springwood will feature 16 service bays and space for 17 new cars in the main showroom.