MERCEDES-BENZ is on track to take the global premium sales crown from arch-rival BMW this year with the big three Germans all recording strong growth in the first half of the year.

To the end of June, Mercedes-Benz Cars has sold a total of 1,043,273 units which equates to a nine per cent gain over the first six months of 2015 and represents the company’s strongest first half on record.

As previously reported, if Mercedes pips BMW for outright sales by the end of the year it will mark the first time in 11 years the Stuttgart-based automotive giant has outpaced its Bavarian rival.

BMW shifted 986,557 units globally in the first half, representing an increase of 5.8 per cent compared with the same period last year, while over in Ingolstadt, Audi recorded first-half sales of 953,200 passenger cars and SUVs, which is a 5.6 per cent improvement over 2015 but not enough of an increase to push it any closer to BMW.

A strong second quarter for Mercedes in which its global passenger car sales were up nine per cent helped increase its lead, and the company says healthy April-to-June increases in Europe (+13 per cent) and its largest market, China (+29 per cent), had a big impact. 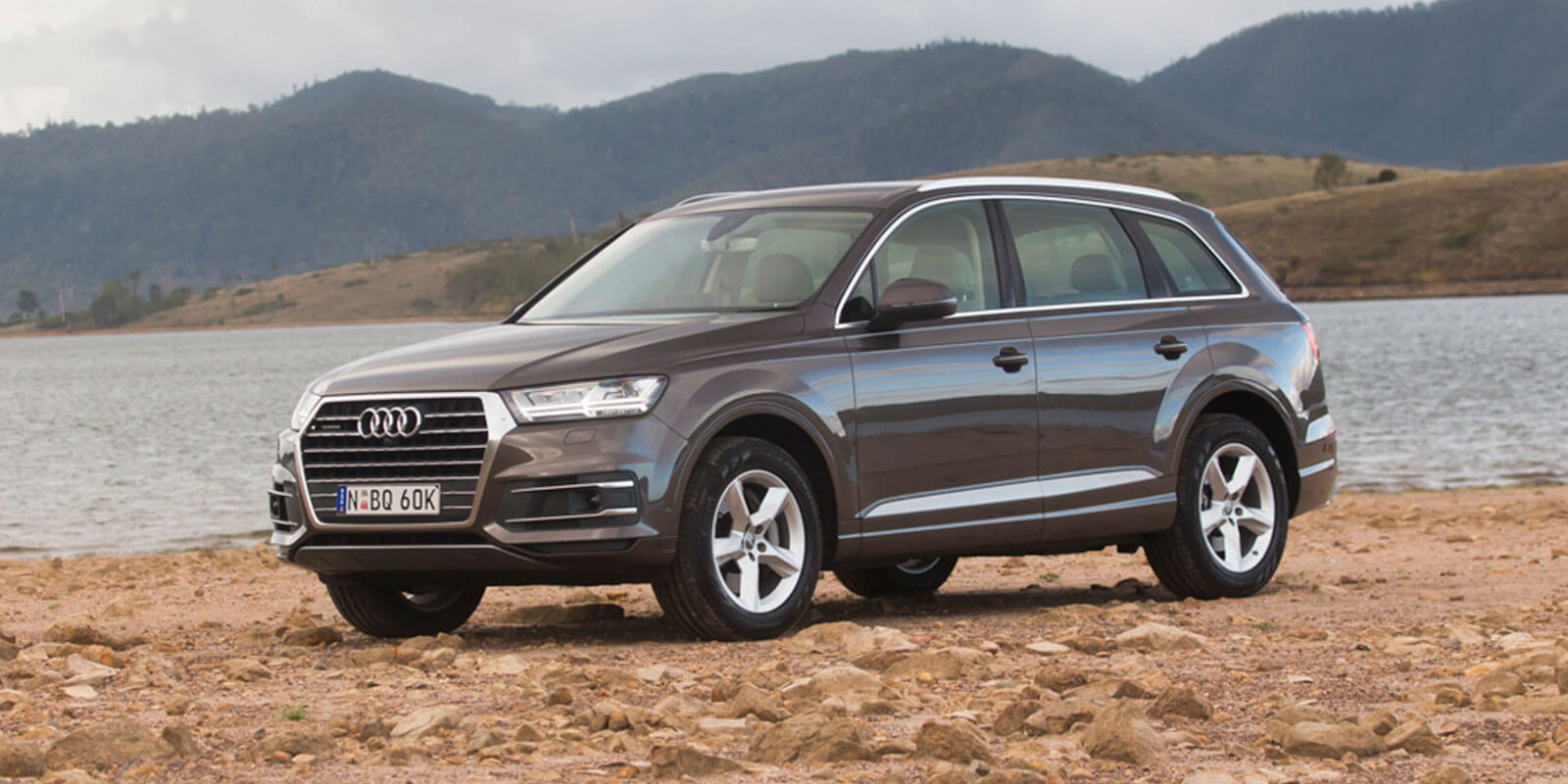 Form a Q: Audi is still third in the overall global sales tally but its Q7 SUV has had a big six months, lifting by 73.6 per cent compared with the same period last year.

Continued interest in models such as the C-Class mid-sizer, GLC SUV and its suite of compact cars – A-Class, CLA and GLA – has helped, and Mercedes expects the trend will continue in the second half as it plans to “significantly increase its unit sales”.

Models that will drive the growth in the second half include the new-generation E-Class large sedan and the wagon now on sale in Europe and other markets, as well as the long-wheelbase E-Class that will be offered in China.

Mercedes also points to the forthcoming GLC Coupe and C-Class Convertible as models without predecessors in its line-up that will impact overall sales when they launch globally in the third quarter, while refreshed versions of the CLA and CLA Shooting Brake are expected as well. 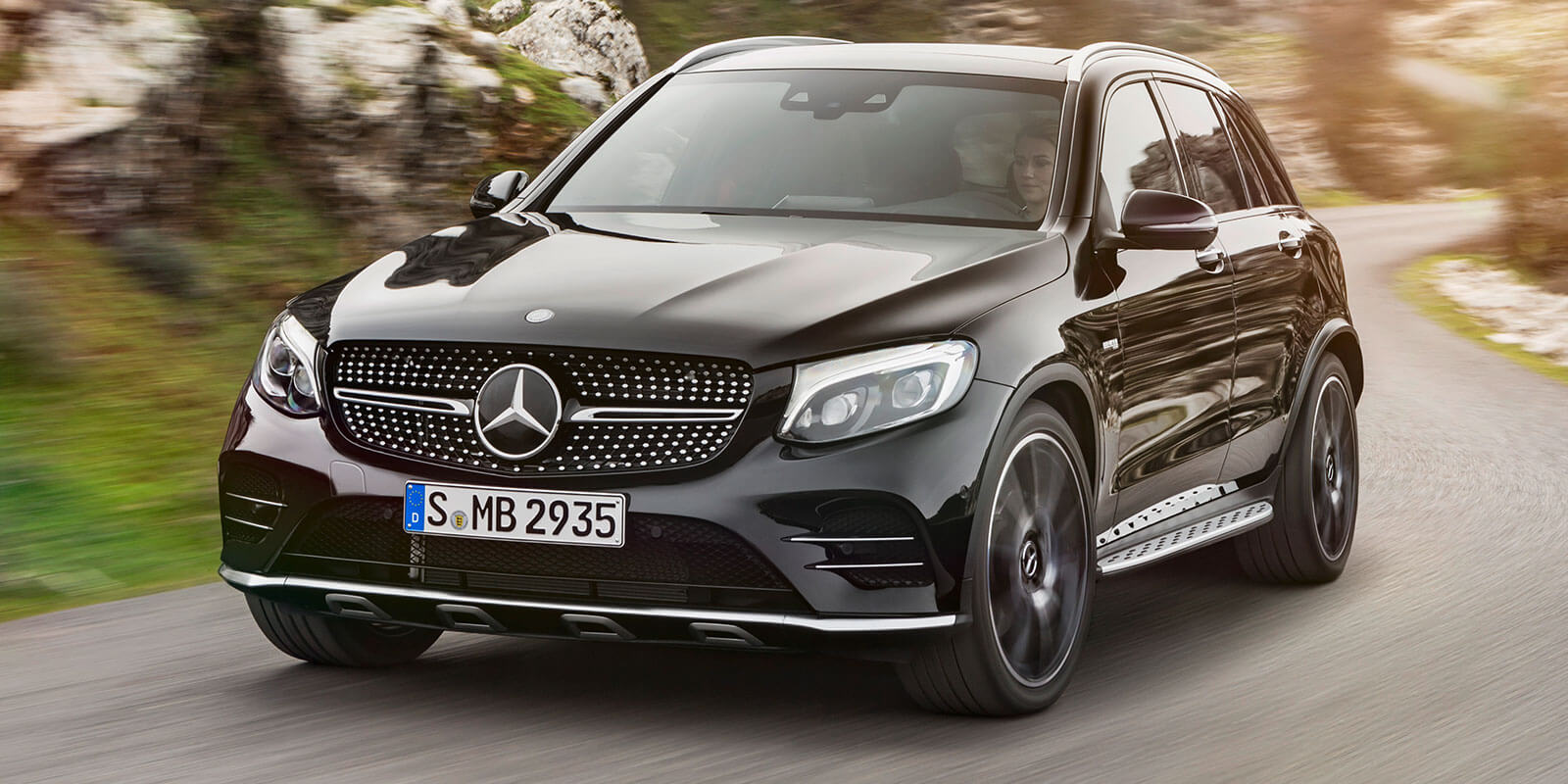 “We are starting the second half of the year with record unit sales and will systematically continue along our path,” said Daimler AG chairman and head of Mercedes-Benz Cars Dieter Zetsche.

“The development of earnings once again shows that our company is extremely well positioned in all areas, and that our long-term strategy is paying off on a sustained basis.

“We are ensuring Daimler’s long-term success with our global presence, our broad-based product portfolio across all divisions and our systematic development of mobility services. At the same time, we continue to set standards for safety, sustainability and technology leadership.” 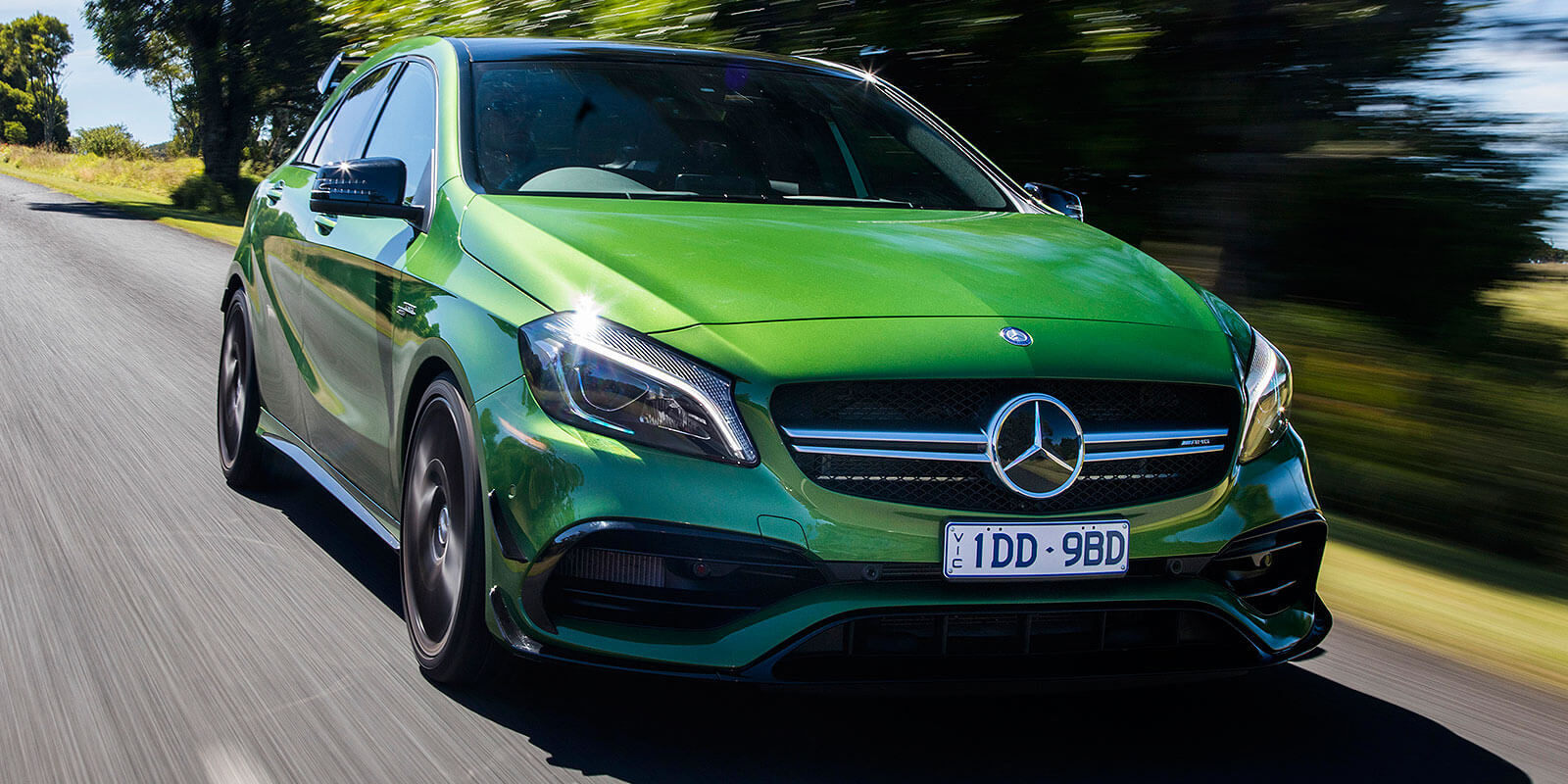 Meanwhile, BMW AG board member responsible for sales and marketing Ian Robertson said the focus for the company was to ensure sustainable growth.

“Our focus continues to be on ensuring sustainable, profitable growth in sales and despite headwinds in some markets, our June results confirm that we are achieving just that.”

While its overall total is for BMW-brand cars and SUVs, BMW says its combined BMW and Mini sales were up in Asia by 7.3 per cent over the first six months of 2015, while the two brands lost ground in the Americas, dropping eight per cent year on year.

Sales of BMW and Mini grew in Europe by 11.2 per cent and the company says it has seen interest in its suite of ‘i’ and ‘iPerformance’ electric or plug-in hybrid models lift in western and northern European regions such as the Netherlands and Scandinavia, that typically have incentives for green cars. 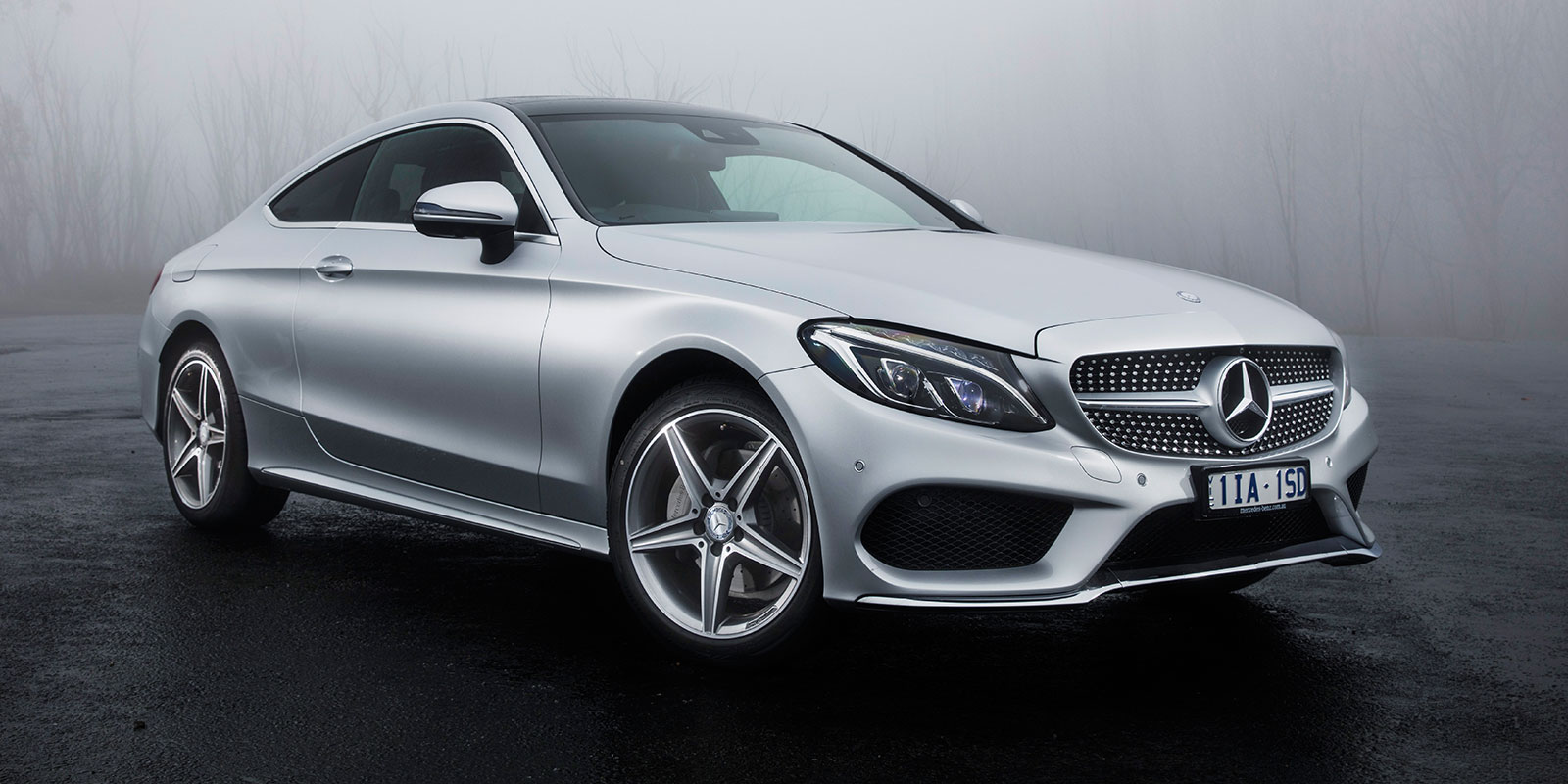 Audi says its strong first half showing was due to growth “in all regions”, particularly in Europe where it grew by 8.4 per cent and moved more than 450,000 units for the first time.

The four-ringed brand said in a media release that global sales of two of its newest models, the A4 and the Q7, were up 12.3 per cent and 73.6 per cent respectively.

Audi AG board member for sales and marketing Dietmar Voggenreiter said key markets helped lift the brand in a challenging environment and he highlighted upcoming models that could give the company a further boost.

“Despite persisting challenges in key markets, the first half of 2016 was mainly characterised by globally balanced growth,” he said. “We reinforced our market leadership in Europe and China and are performing better than the overall market in the United States.

“In the upcoming months, we will continue to strengthen our model portfolio with new technologies and concepts like the Audi Q7 e-tron, the A6L e-tron, the SQ7 TDI and the Q2.”

In 2012, Audi chairman Rupert Stadler predicted that Audi would become the number one premium brand by 2020, but it is facing an uphill battle against the equally aggressive BMW and Mercedes.

For Australia, the podium mimics the global result, with Mercedes-Benz out in front on 20,681 sales year to date, followed by BMW on 15,754, while Audi is in third on 12,159. Taking out Benz’s commercial vehicle sales brings it back to a little over 18,500 units but more than enough to lead the charge. 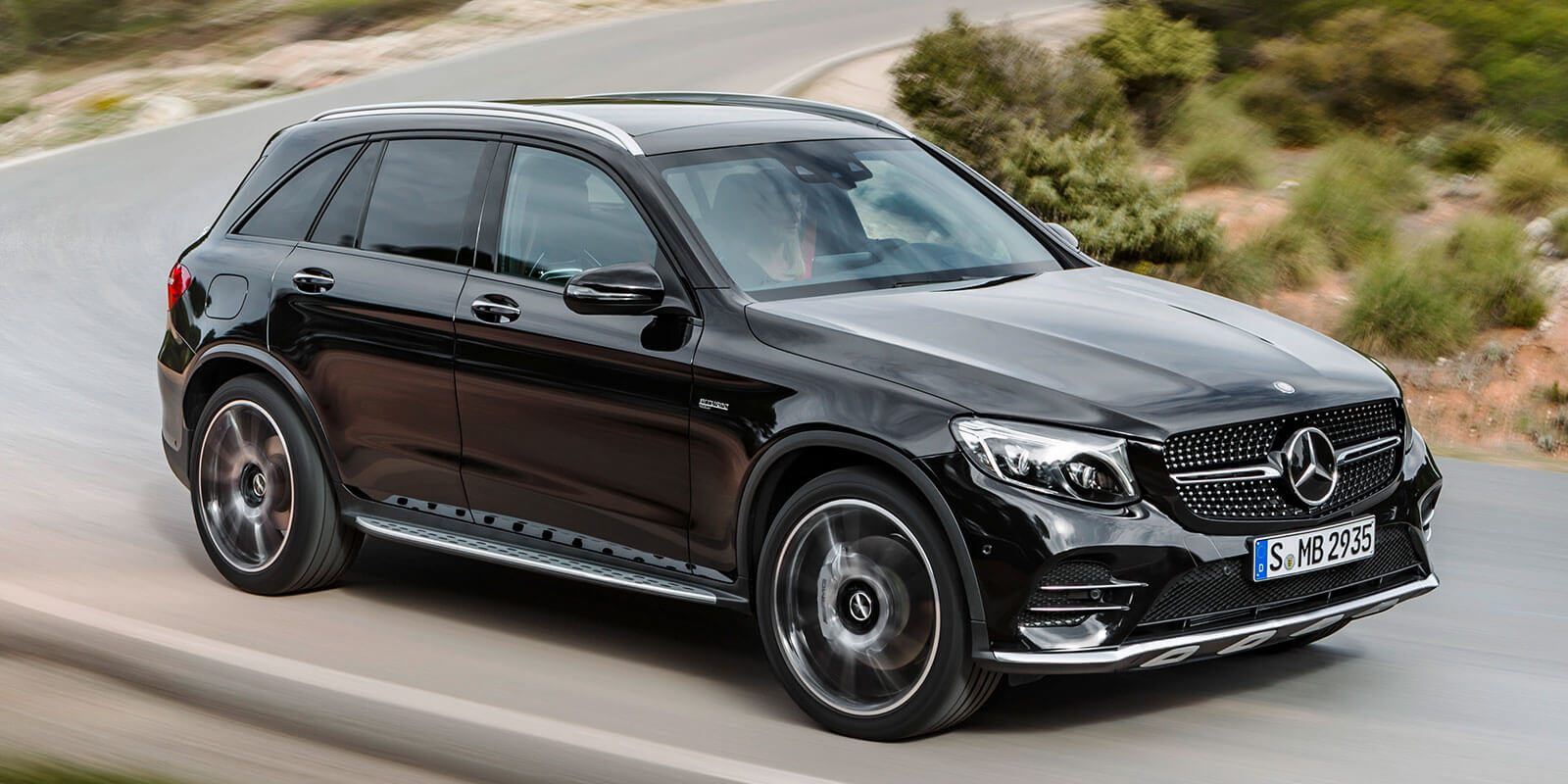 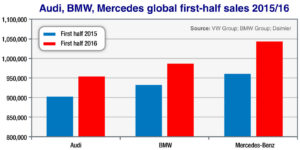 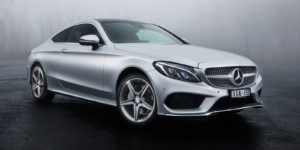 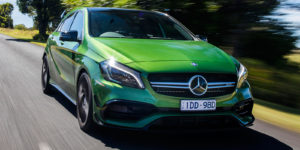 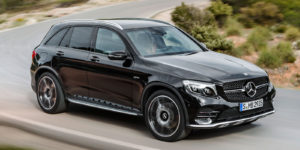 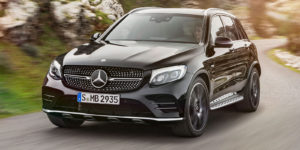 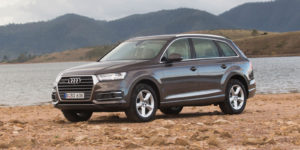