THE market capitalisation of Australia’s biggest listed car company has plunged more than $3 billion in less than six months as the automotive industry takes another severe hit, this time caused by the COVID-19 virus.

AP Eagers Limited, which in September last year merged in a $2 billion deal with Automotive Holdings Group Limited, this week has a market capitalisation of $695 million, one-fifth of its market value of September 25 last year.

This September date represented the peak of AP Eagers’ share price over the past five years at $14.49. It is now about $2.70.

AP Eagers this week immediately announced a halving of its dividend payout for 2019, and non-executive directors agreed to forgo full board fees while senior executives have bypassed any participation in any new equity incentive plans for 2020.

Chief executive Martin Ward has also forgone all short-term and long-term incentives and has reduced his base salary. A statement this week to the Australian Securities Exchange (ASX) said the result was a 46 per cent reduction in Mr Ward’s remuneration package.

Meanwhile, executives have been buying shares in their company as the share price slides, with major shareholder Nick Politis buying 200,000 shares at $5.10 each worth $1.02 million on March 18. It increases his stake in AP Eagers to 69.7 million shares equivalent to 27.14 per cent of the company.

The virus sting comes after more than two years of wilting new-car sales triggered by the government’s move to tighten credit and place stricter guidelines on insurance business.

That was followed by declining vehicle sales, then compounded by restricted supply through European fuel test protocols and then quarantined shipments.

At the centre of the latest blow to the industry is the COVID-19 virus and its crippling effect on the global share markets as industries warn of massive production falls on the quarantining of workers and the erosion of sales.

In the six months it took for AP Eagers to lose 81 per cent of its market capitalisation while in the same period, the ASX’s All Ordinaries index fell about 30 per cent.

VFACTS data for the period shows vehicle sales down 9.3 per cent in the same six-month period (to the end of February 2020). 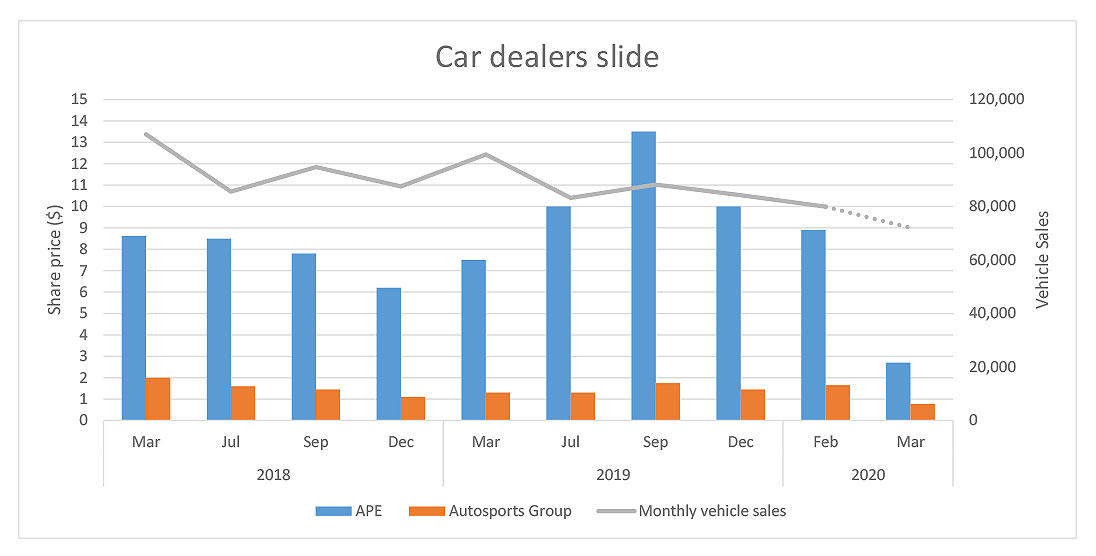 In November last year, following the merger of AP Eagers and AHG, Mr Ward said the automotive industry in Australia “was battling tougher times in the short term” but said the merger would create a company in the ‘”strongest possible position’” to take advantage of a rebound.

AP Eagers is by no means alone. Another listed dealership group, AutoSports Group Limited, has slumped to a market capitalisation of $155 million from $352 million, a fall of 56 per cent, as its shares went from a high in the past 12 months of $1.84 each to about 77 cents now.

Australia’s biggest motorcycle retailer, Motorcycle Holdings, is now about 65 cents a share from its 12-month high of $2.50, reducing its market capitalisation to about $40 million from $154 million or 74 per cent. Motorcycle sales in the past year have slid about six per cent.

David Lye of online new-car buyer site PriceMyCar said the cumulative effect of weakening demand and then the sudden compounding of the virus has seen his business drop dramatically.

He said PriceMyCar was recommending dealers to about 1500 prospective new-car buyers. Last week that fell to 400 buyers, or a fall of about 70 per cent.

His concern about the market is that his figures are based on his online business that has not been affected by any physical restraints.

“The buyers who might otherwise have visited a dealership in person may now be lying low and turned to the internet and have actually inflated those figures,” he said.

“There is no doubt regular bricks-and-mortar dealers are seeing an even sharper decline.

“As of last week, you could safely say the new-car buying interest on the retail sales floor has dropped by around 80-90 per cent. For comparison, China’s new-car sales dropped by 80 per cent in February.”