COMPETING in the Formula SAE-A competition gives engineering graduates a ticket to the world and bodes well for the automotive sector in Australia, according to Victorian minister for industry and employment Ben Carroll.

Mr Carroll was speaking on the first day of the Formula SAE-A event at Calder Park, where 27 teams from around the country and the world have gathered to find out which one has designed the best internal combustion and electric racecars.

Last year’s overall winner, University of Wollongong, is back to defend its title and has also brought its first electric car. However, the internal combustion car has been completely redesigned and may have trouble matching last year’s performance. 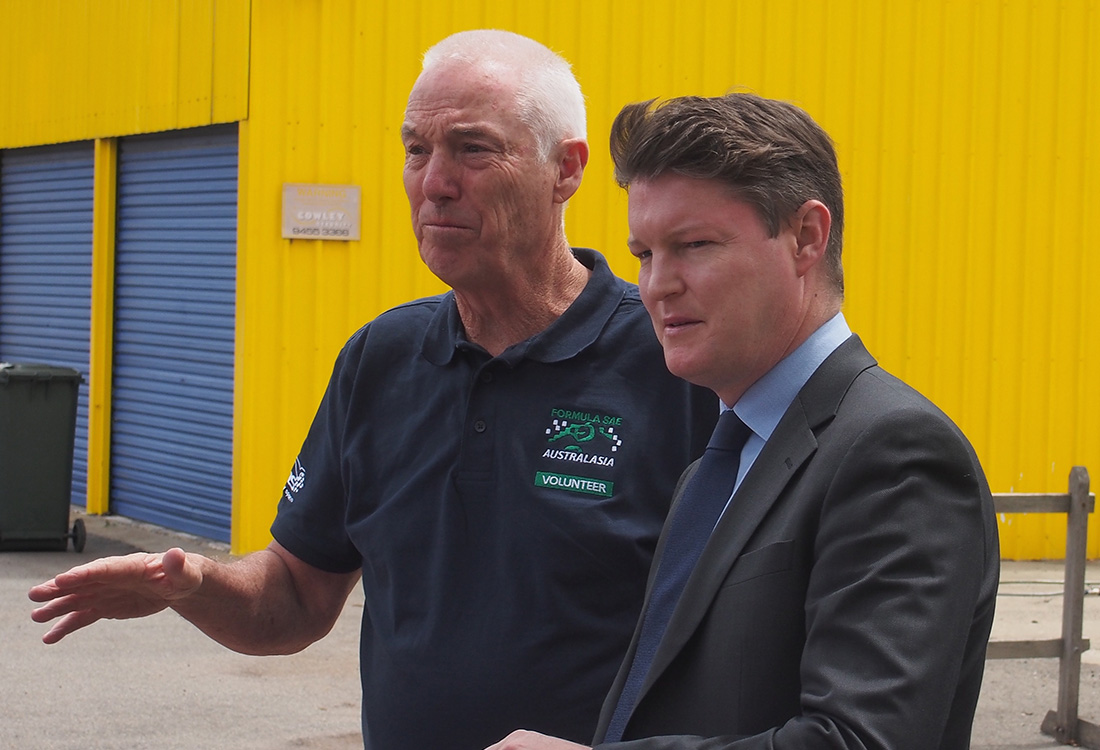 Race time: From left, Adrian Feeney, member of the management syndicate of the Society of Automotive Engineers Australasia, and Ben Carroll, Victorian minister for industry and employment.

“Manufacturing for the first time in 10 years has grown for 10 consecutive months this year. Manufacturing in Victoria employs 280,000 Victorians. It added about 40,000 jobs last year.”

Mr Carroll said that, while local car manufacturing had ceased, there would still be a demand for automotive design and engineering skills in Australia.

The minister visited Holden Special Vehicles earlier this week, where he had a close look at a Chevrolet Camaro that the company will convert to right-hand-drive configuration from next year.

“We have the best designers and engineers anywhere in the world. That Camaro was basically designed by Melbourne’s best.”

Mr Carroll said these operations were supported by the local proving grounds, such as Ford’s site in the You Yangs.

He said the government had to do everything it could to capitalise on the autonomous vehicle revolution that was unfolding.

“Then there is the work on autonomous vehicles. We have to do everything we can. Only last week in parliament we passed legislation to encourage the autonomous vehicle sector because we know this industry is going to take off.

“It is a $9b industry now and it is going to transform how we get around in Australia. It is very exciting. But, as we know, we have to be at the forefront of it and grab every opportunity.

“To see all these students today grabbing the opportunity through Formula SAE is so important because it adds to their resume and it really gives them a ticket to the world and the future of the industry.”

The University of Wollongong is determined to defend its title although team leader Ben Filippi said its all-new internal combustion design did not reach its design potential.

“We have gone to a single-cylinder Yamaha WR450 engine with 10-inch wheels. Last year we ran a (four-cylinder) Honda CBR600 with a chassis using 13-inch wheels. Our internal combustion package has completely changed.” 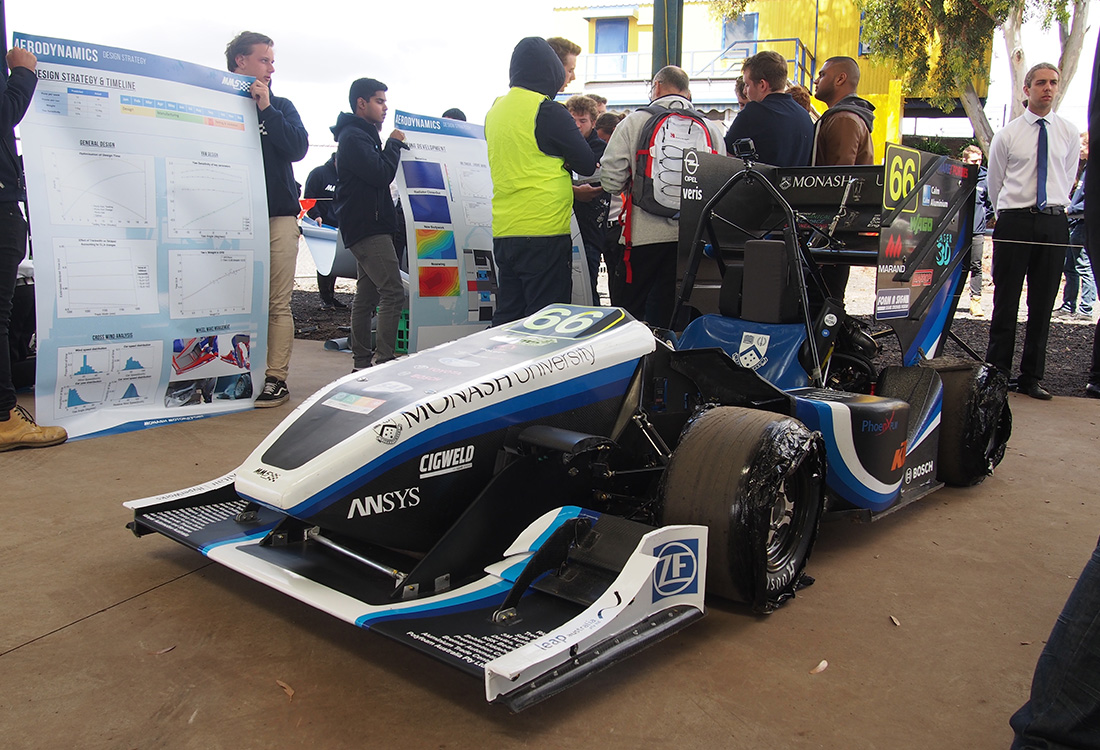 The team had planned to turbocharge the smaller engine.

“We were looking to go turbo, but sourcing issues prevented that. We are still making reasonable power out of the single with the restrictor. We would make more with the turbo, but that’s OK.”

Mr Filippi said he was excited about the team’s first electric car, which is based on the 2015 internal combustion chassis.

“We have taken the same designs for unsprung weight and suspension mounting points to allow for a shorter design period. The rear end has been modified to allow for the electric powertrain.”

The design features two motors at the rear, one for each rear wheel and high voltage engineer James Smedley said the layout was a better fit for the chassis than having one larger motor. 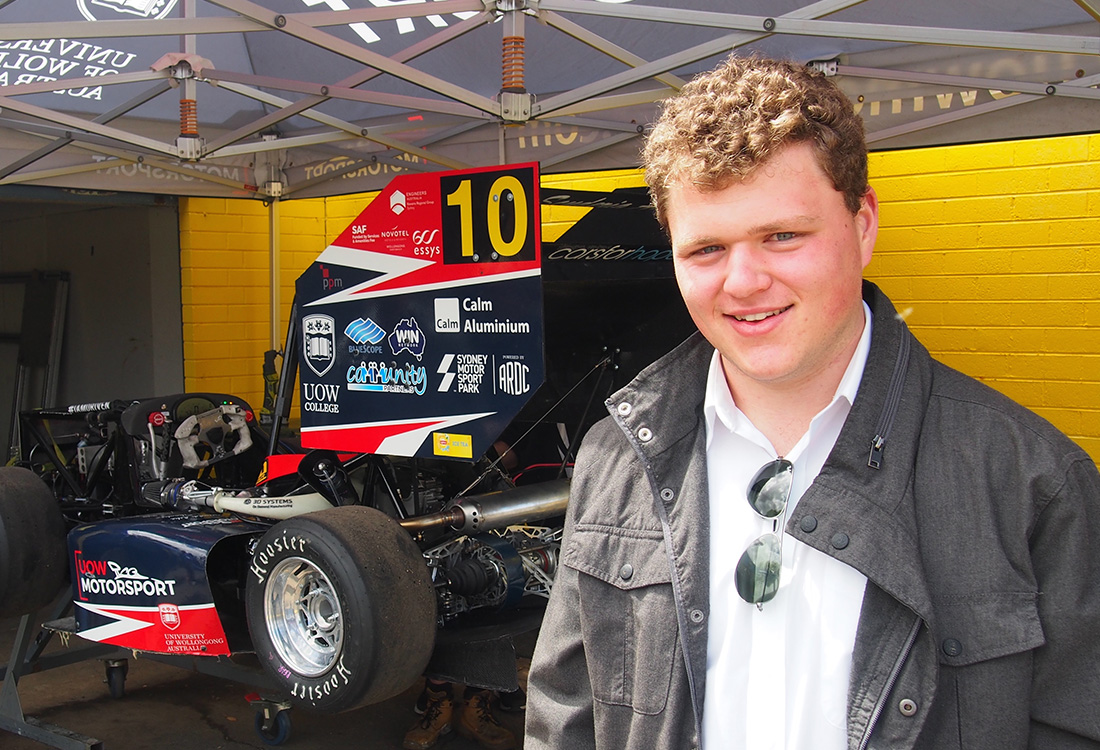 He said the two-motor layout would allow for the adoption of torque vectoring in the 2018 car.

Another casualty of the need for a shorter design period was aerodynamics on the electric car.

“We didn’t do aero for the electric car because we wanted to keep the workload down and put more focus into the chassis and the drivetrain design.”

The competition is spread over a number of categories including design, costing, business case and a range of dynamic tests including acceleration, handling, fuel economy and endurance.

The competition is being held at Calder Park Raceway over Saturday and Sunday and the public is welcome to attend. Entry is free. 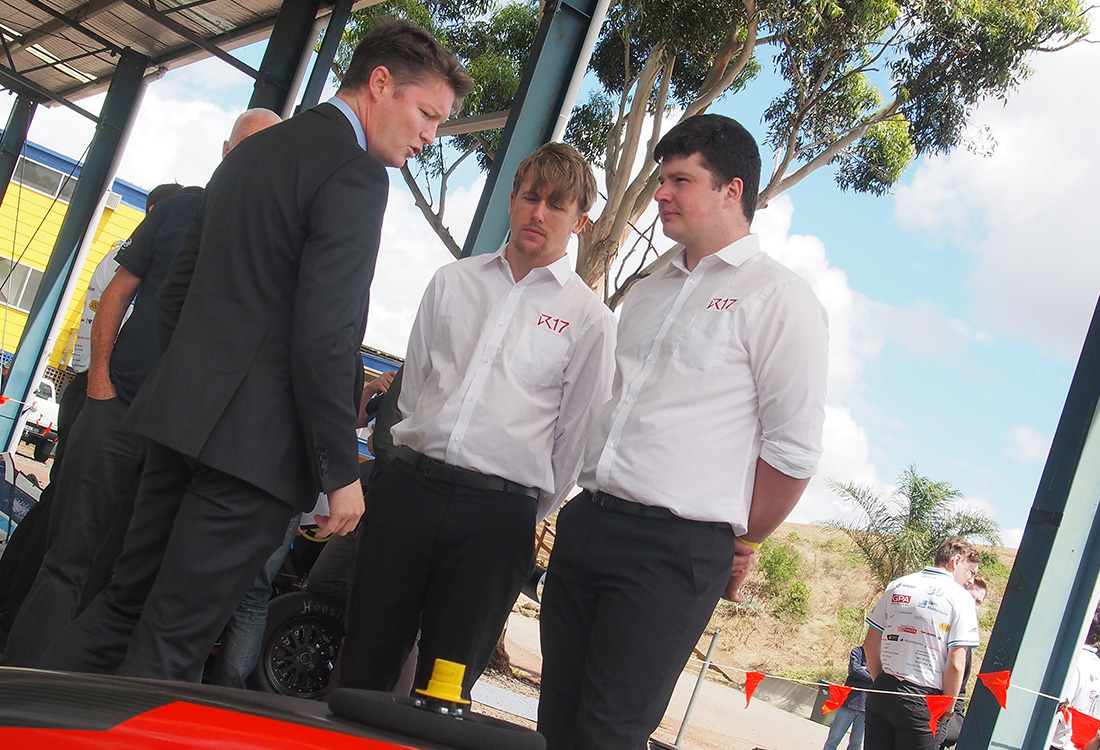