THE New Economic Order of premium consumers may be the saviour of the Australian automobile retail industry as a new group is emerging with a strong desire to own a car – and especially a premium car – and they are likely to boost sales into the near future.

The New Economic Order (NEO) of consumers is so enamoured with a new car that Roy Morgan’s latest survey of automotive buying intentions data shows that they are set to drive new vehicle sales in the next four years.

According to research conducted during the March quarter of 2020, one-in-seven NEOs (14.9 per cent) intended to buy a new vehicle in the next four years.  This is 54 per cent above the comparable figure for all Australians (9.6 per cent).

Roy Morgan CEO Michele Levine said there are five million NEOs in Australia who spend and invest more, and more frequently, than anyone else.

“They change and adapt so quickly; they are Australia’s future shapers,” she said.

“It’s no surprise, therefore, that they intend to buy new cars in the near term. And, notably, the top 50 per cent of NEOs – known as Super NEOs – are almost 80 per cent more likely than the average Australian to buy a new car in the next four years.

“Conversely, Australia’s 10 million traditional consumers are 30 per cent less likely than the population to buy a new car in the next four years.”

“They invest in brands and experiences that are authentic. NEOs change and adapt so quickly; they are Australia’s future shapers,” she said.

“NEOs represent a rare opportunity for vehicle brands to sell new cars in a market already in decline and decimated by the COVID financial crisis.

“And yet marketers in the passenger vehicle sector still tend to focus on Australia’s 10 million low-spending traditional consumers.” 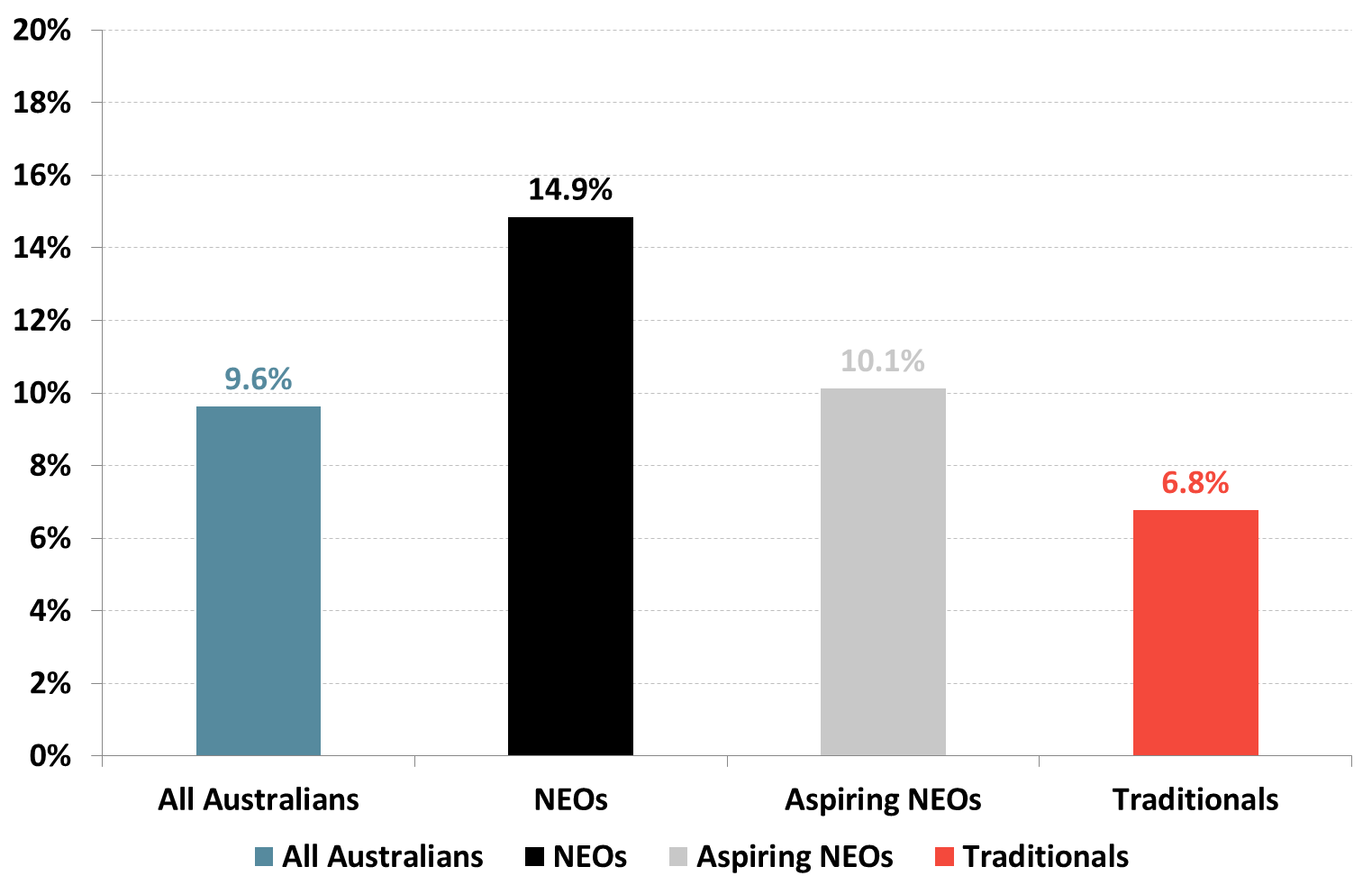 She believes it will be a two-speed recovery and that the fast lane is already being driven by Australia’s NEO consumers.

“The focus has been on the decline in new car sales in Australia over the past year, and it’s true they have declined on a monthly year-over-year basis for two years,” she said.

“However, this rear-vision view ignores the positive news coming from the premium consumers who have a much higher new vehicle buying intention than all other Australians combined.

“In the wake of the COVID-19 shutdowns during March-April-May, new vehicle sales were always going to decline massively as Australians went into lockdown.

“Identifying the premium consumers who will recover first and fastest has therefore never been more important. It is the key to finding the fast lane to recovery in the post-recessionary period.”

Roy Morgan’s research said that Aspiring NEOs, with the NEO mindset but not the buying power, are more likely than Traditionals (but less likely than NEOs) to be planning to buy a car in the next four years.

Traditionals are the core of Australian consumers with values centred around the significant events in their personal and family lives, according to the Roy Morgan definition.

Ms Levine said NEOs buy cars not as status symbols to impress others, but rather as a “whispered secret to themselves”.

“Porsche is the perfect example,” she said.

“NEOs are 80 per cent more likely than the average Australian to buy a Porsche in the next four years, and that puts Porsche at the top of the premium list.

“NEOs are seduced more by the Porsche pedigree, design beauty, and authenticity than by the brand as a status symbol or statement of importance,” Ms Levine said.

(Index: calculated by the proportional difference in purchase intention between NEOs and all Australians)