AUDI Australia has revealed that its expanded line-up of Audi Sport models has taken the sales pressure off the underperforming TT and R8 sportscars, with almost one in every five buyers choosing an S- or RS-badged model so far this year.

Audi has sold 18,047 vehicles to the end of October this year, 3217 (or 17.8 per cent) of which have been one of the prestige German brand’s 17-strong line-up of S and RS models across various model segments.

These high-performance variants, such as the RS3 sedan within the A3 line-up, are adding important sales volume at a time when the brand overall is facing its first annual sales downturn after 12 successive years of growth.

However, they have also taken some shine off Audi’s traditional TT sportscar, which has contributed just 194 sales to the scoreboard this year, down a considerable 58.2 per cent, while the flagship R8 sportscar has also added only 48 sales this year, down 20 per cent. 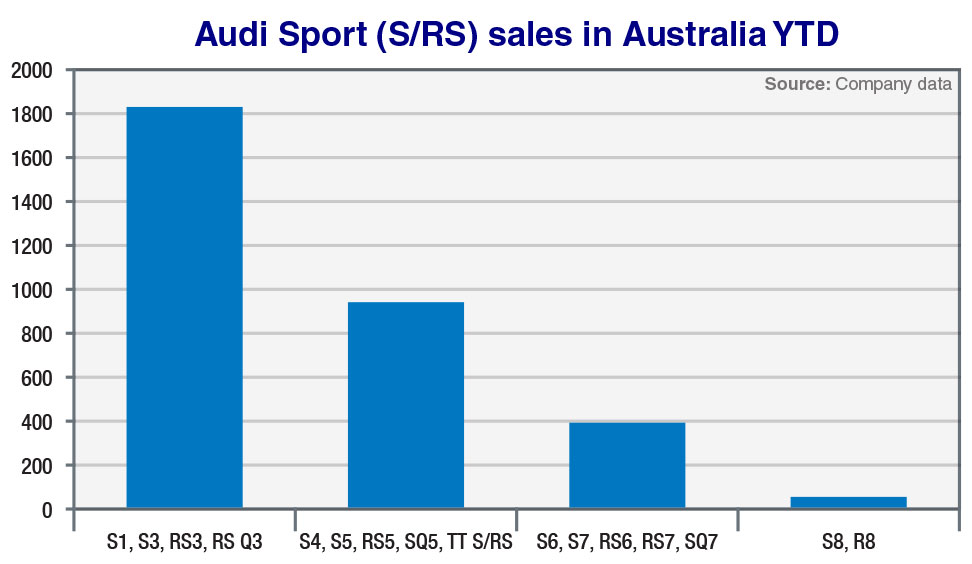 t the launch of the Q2 2.0 TFSI quattro last week that the expanding Audi Sport range had taken a toll on sports coupe sales.

“We have really strong S and RS contribution (and) we’ve traditionally been around fourth or fifth in the world for the number of S and RS models per capita,” Ms Burgdorf said.

“We’ve seen an extraordinary uptake in RS3 sedan and Sportback. They exist in the same segment (as TT) for us. The TT is a car that’s driven by design lovers and design aspirants, and cars like the TT RS will always be quite extraordinary in the love that those customers have for those cars, but it doesn’t necessarily mean there’s hundreds of them. 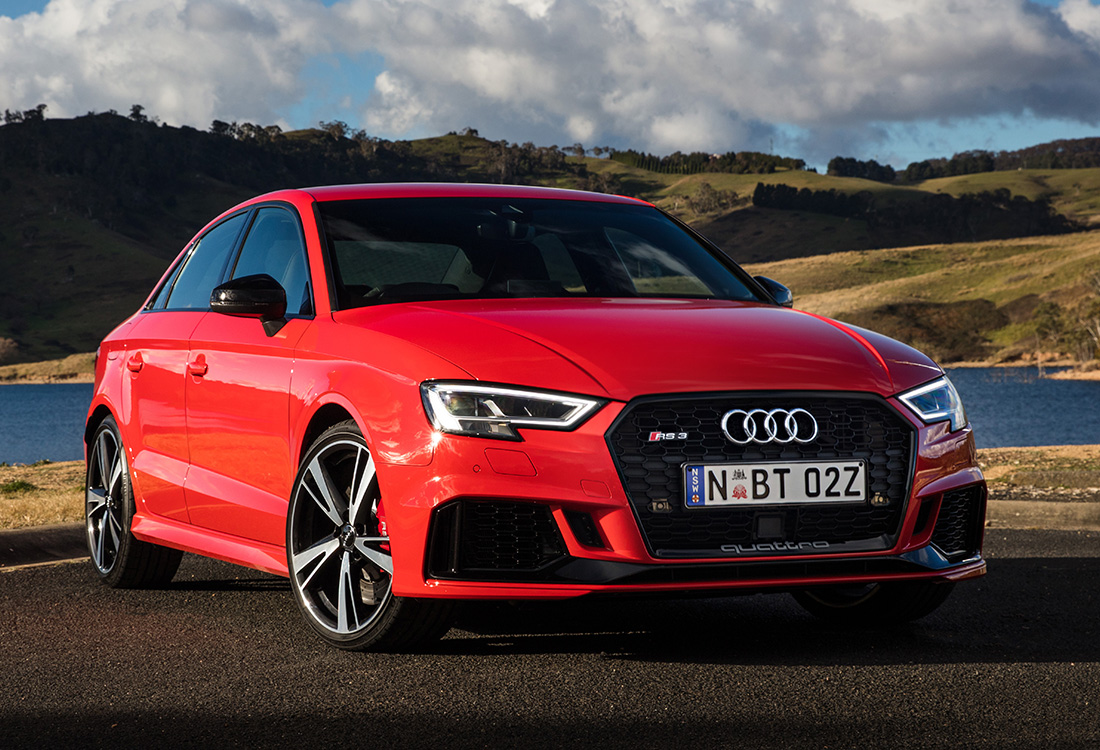 3 cheers: High-performance S and RS versions of Audi’s A3 sedan now account for 48 per cent of the model’s overall sales this year.

“Whereas a car like the RS3 that has a really broad appeal at a more attainable price, RS3’s incredibly strong. Hundreds of cars. Likewise, for S3. (But) as long as customers are buying Audi, that’s the thing that’s most critical for us.

“We still want to continue to offer design leaders like the TT because that really changed the game for us in the late ’90s. That really put Audi on the map from a company that had the ability to create an absolute design icon, which it still is.”

Figures supplied to GoAuto by Audi Australia show that S/RS variants in the compact model segments – namely S1, S3, RS3 and RS Q3 – have racked up 1832 sales this year, which represents 56.9 per cent of all S/RS sales and, notably, 23.6 per cent of sales across the overall A1, A3 and Q3 lines.

Among those models, a staggering 48 per cent of all A3 sedan buyers have picked an S3 or RS3 this year, which Audi Australia hopes will – along with strong demand for SQ5 and SQ7 – pave the way for the forthcoming RS4 Avant and RS5 coupe in the medium-sized segment.

Count on Audi Sport versions of the Q2 also boosting sales further down the track. 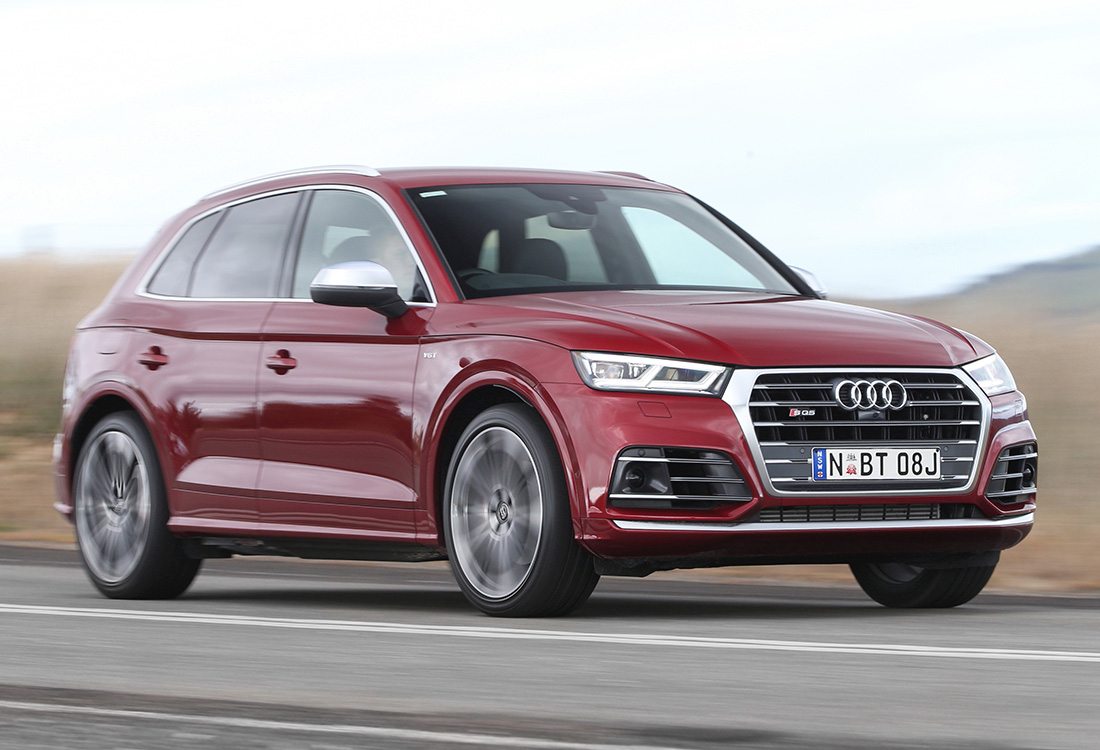 “There is no question that this is a performance car market, and if you look at cars like the first-generation SQ5, that became the biggest-selling variant in the Q5 model range, and the Q5 model range sold its socks off,” Ms Burgdorf said.

“It’s a combination of a car that everybody wants to drive and buy. It was versatile, it was practical, and it was a great package, and so we were really lucky.

“Likewise, with the SQ7, that is incredibly strong because it became a very versatile sportscar. It became part of what Audi is and stands for – that beautiful, practical cars like SUVs, like wagons, can have a sports focus as well.

“So I think RS4 will be extraordinary for us. It’s an icon. It’ll come around the end of the first quarter next year (and) I think if you look, based on history, it’ll be strong.”

Audi has recorded 941 S/RS sales so far this year among the S4, S5, RS5, SQ5 and TT S/RS cohort, representing 29.3 per cent of total S/RS sales and 16.8 per cent of overall A4, A5, Q5 and TT sales – figures that should rise with the RS5’s arrival in showrooms next month, followed by the RS4 Avant next year. 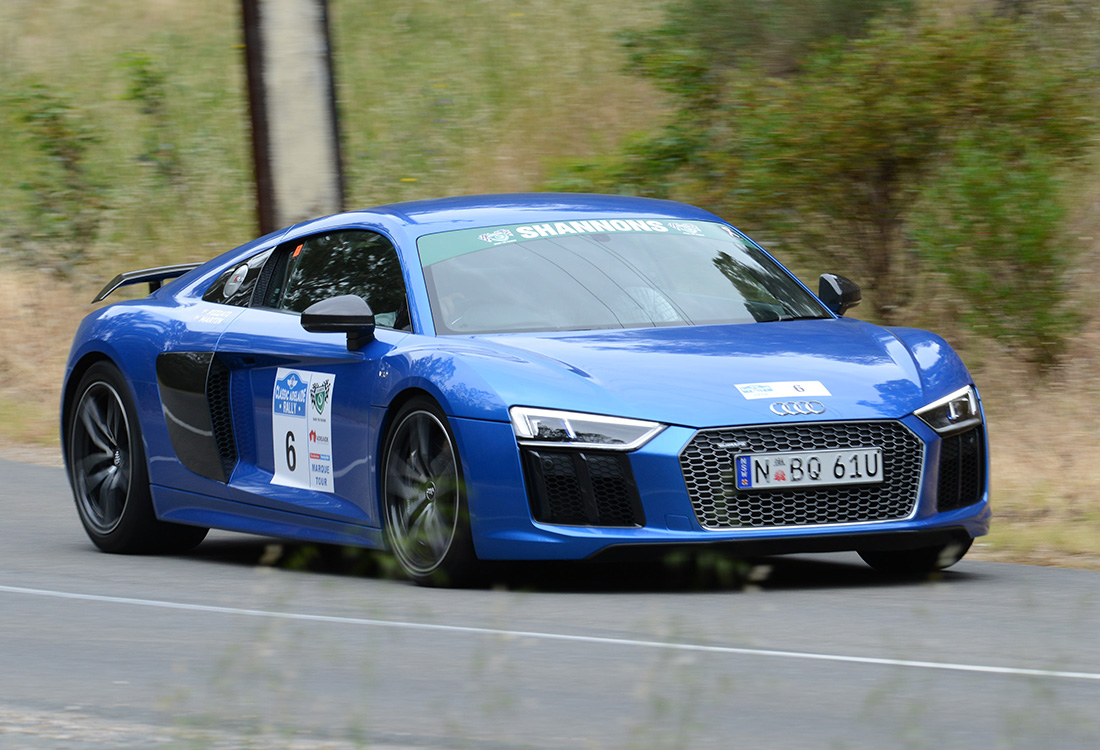 Further up the line, the larger S6, S7, RS6, RS7 and SQ7 have contributed 392 units for a 12.2 per cent share of the local Audi Sport sales total and 14.9 per cent of total A6, A7 and Q7 sales, and without an imminent refresh for the sportier versions, the balance here is not expected to move to any great extent in the short term – unless supply frees up for key variants.

Ms Burgdorf said SQ7 sales have “only really limited by what we’ve been able to get in the market”.

At the top end of Audi’s range, four sales are attributed to the S8 from the A8 limo’s 27-unit total for the year to date.

In addition to the arrival of the RS4, Audi Sport will get a boost in 2018 with the addition of the limited-edition R8 V10 RWS (Rear Wheel Series) and R8 Spyder V10 Plus in the first quarter, while the global reveal of the A7 Sportback and A8 will be followed by S7, RS7 and S8 equivalents.

The next major global reveal for Audi will be the replacement for the Q3, which is expected to become larger to make space between it and the similarly sized Q2, but it will not make it to Australia until 2019 – and an RS Q3 replacement will be even further down the track.