Another sales record for Lamborghini, but Ferrari continues to rule supercar roost

THE global supercar market kicked up a gear last year as Lamborghini chalked another annual sales record to inch closer to arch-rival Ferrari, while McLaren’s meteoric rise up the charts now sees it looming large in the rearview mirrors of the Raging Bull.

Announcing financial and sales results for the 2016 fiscal/calendar year last week, Automobili Lamborghini confirmed that it hit a new annual sales highpoint of 3457 units last year, representing a seven per cent increase over 2015 (3245) and its sixth consecutive year of growth.

In comparison, the rising British supercar marque McLaren recorded 3286 sales worldwide, up a massive 99.3 per cent over the previous year (1654) to be well in excess of its predicted 3000 units. 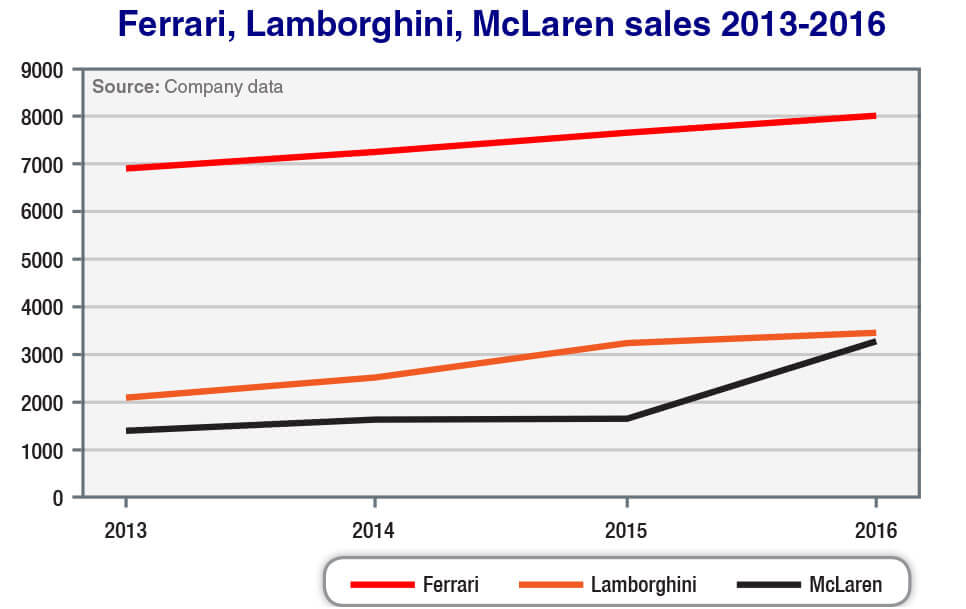 There is still plenty of road and track to Ferrari out in front, and while the Prancing Horse brand did not manage the same level of growth last year as McLaren or Lamborghini, its healthy 4.6 per cent increase over 2015 took it up 350 sales to beyond the 8000 mark – to 8014 units.

While the House of the Raging Bull experienced record sales in Asia-Pacific and Europe, the Middle East and Africa, the United States remained its biggest market by far, with 1250 supercars sold there last year.

Lamborghini hit a high note in Australia last year as well, recording 127 sales of both models, a massive 51 per cent hike over its 2015 result.

Automobili Lamborghini chairman and chief executive Stefano Domenicali said the company – which is part of the Volkswagen Group – was “outperforming our planned figures” ahead of further growth expected in the coming years. 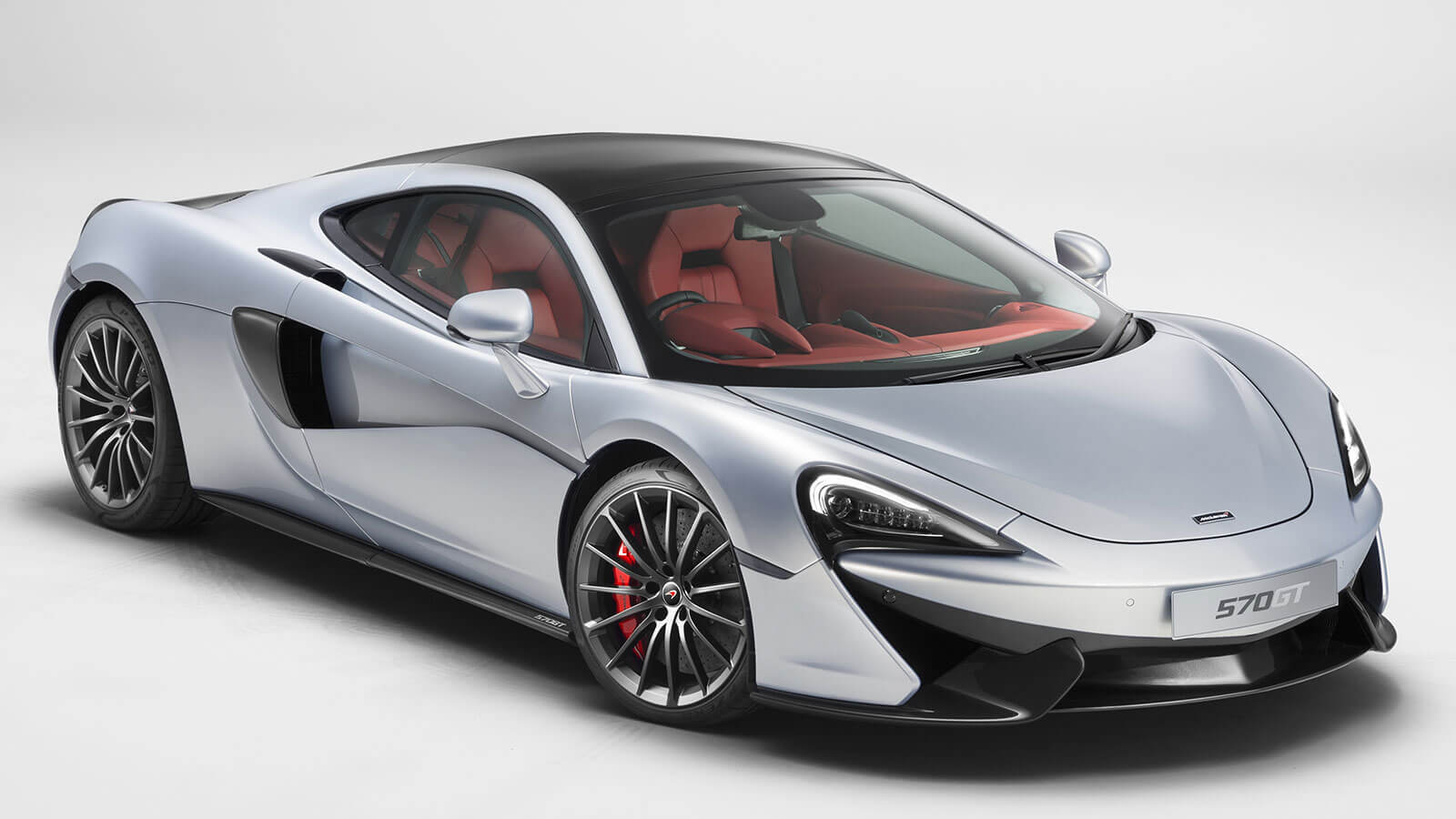 Super duper: McLaren sales doubled last year on the back of new model launches, including the 570GT.

“In the face of the biggest expansion in our company’s long history, in the build-up of our product portfolio, our development and production capacities, we are introducing fascinating new products, creating new jobs and increasing our profitability,” he said.

“All of this could not have been done without our excellent team that deserves all the credit.”

That growth is expected to come from the Urus “Super SUV” that will launch globally next year.

The company is gearing up for the SUV’s launch by expanding its Sant’Agata Bolognese production facility from 80,000 to 150,000 square metres, with capacity expected to increase to 7000 units a year.

Over at McLaren, its 3286 global sales volume was made up of 2031 units for Sports Series models such as the 570GT and 570S, while the more limited-run higher-performance Super Series cars captured 1255 sales. 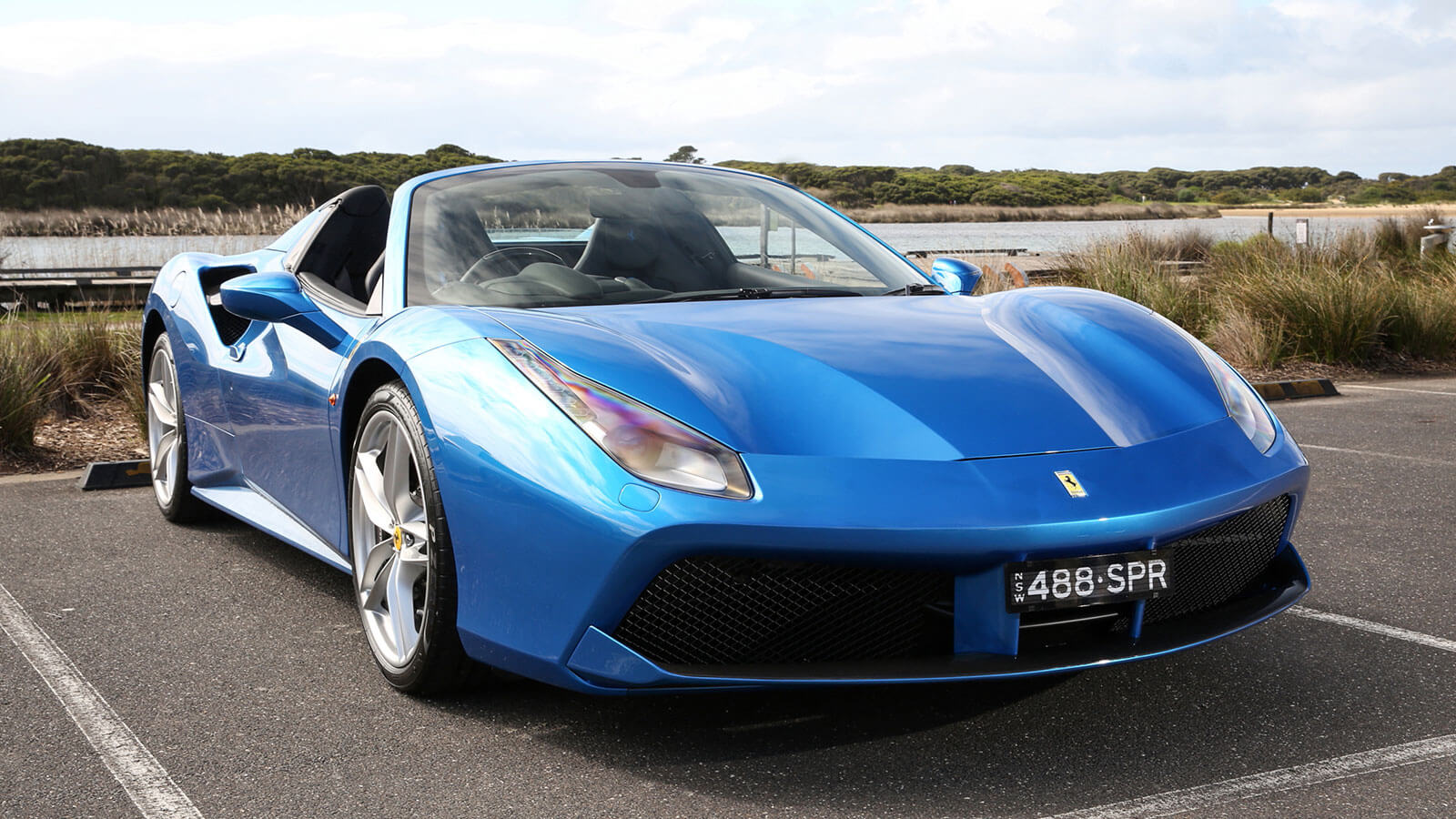 As with Lamborghini, the US was McLaren’s key market, with 1139 cars delivered there last year, a 106 per cent increase over 2015.

Europeans snapped up 996 McLarens last year – a 153 per cent boost – while 228 were sold in China. The Middle East, Africa and Central and South America grew by 69 per cent and Asia-Pacific, which includes Australia, lifted by 90 per cent.

The Surrey-based super-brand says it expects continued sales growth on the back of its Track22 business plan that will see it invest ₤1 billion ($A1.5b) and launch 15 all-new models by the end of 2022 as well as developing a new fully electric powertrain for possible use in a future Ultimate Series model line.

In detailing its 2016 sales results, Ferrari said its V8 models achieved a five per cent increase, thanks to the successful launch of the 488 GTB and Spider, while the new GTC4Lusso helped give V12 sales a four per cent lift. 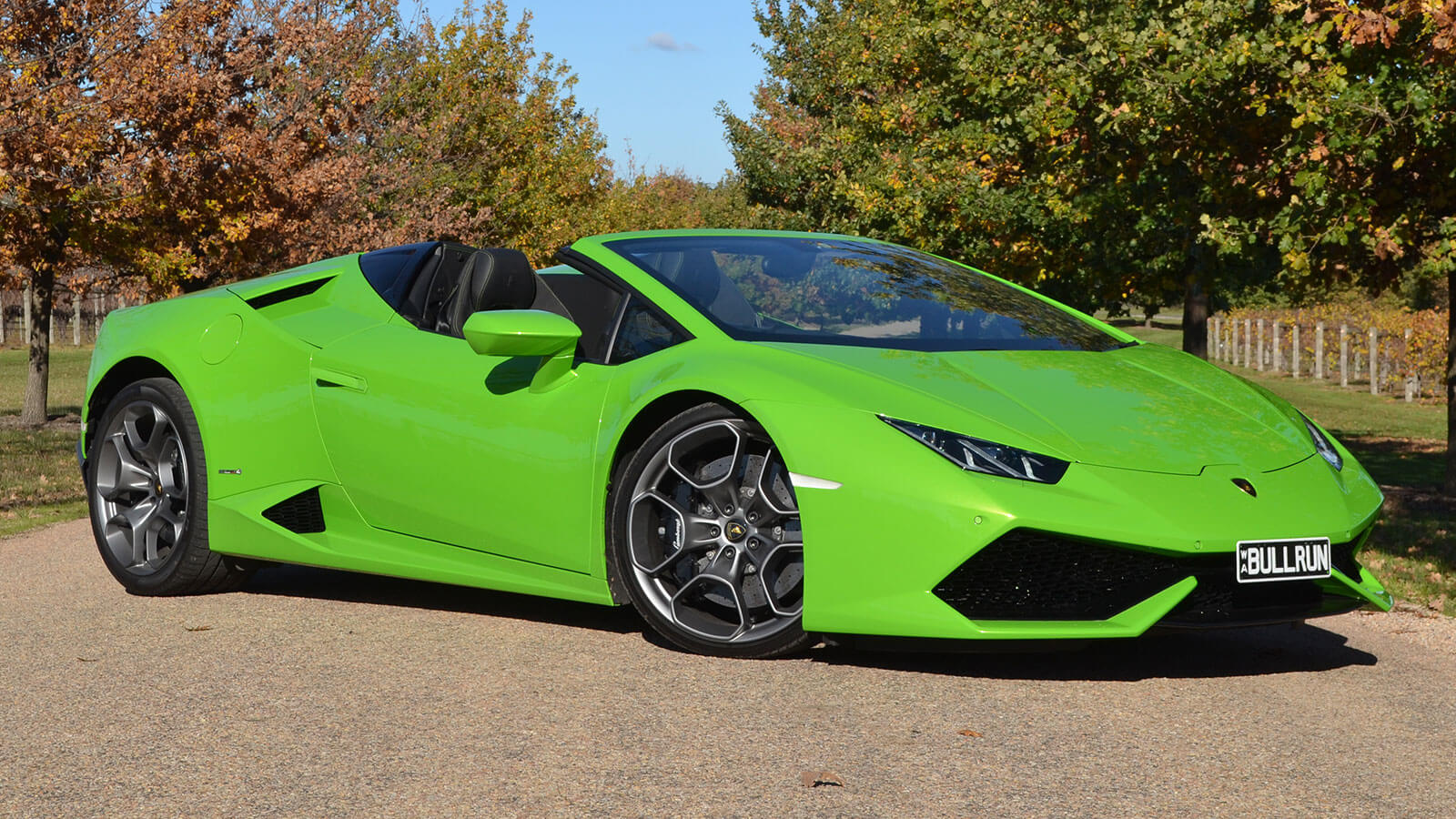 Every region in which Ferrari has a presence recorded positive growth, including Europe, the Middle East and Africa (+8 per cent), the Americas (+2 per cent) and Asia-Pacific (+3 per cent).

Cashed-up Australian buyers helped Ferrari achieve that Asia-Pacific growth, with 188 sales Down Under last year, a 12.6 per cent lift over 2015.

Ferrari says it is expecting an even greater year in 2017, predicting sales of 8400 units worldwide.

Among the broader super-sports and luxury brigade, Maserati recorded 42,100 vehicle deliveries worldwide last year (+30 per cent) – driven by the launch of the all-new Levante SUV, with significant increases in all regions: China (+91 per cent), Europe (+37 per cent) and North America (+14 per cent). 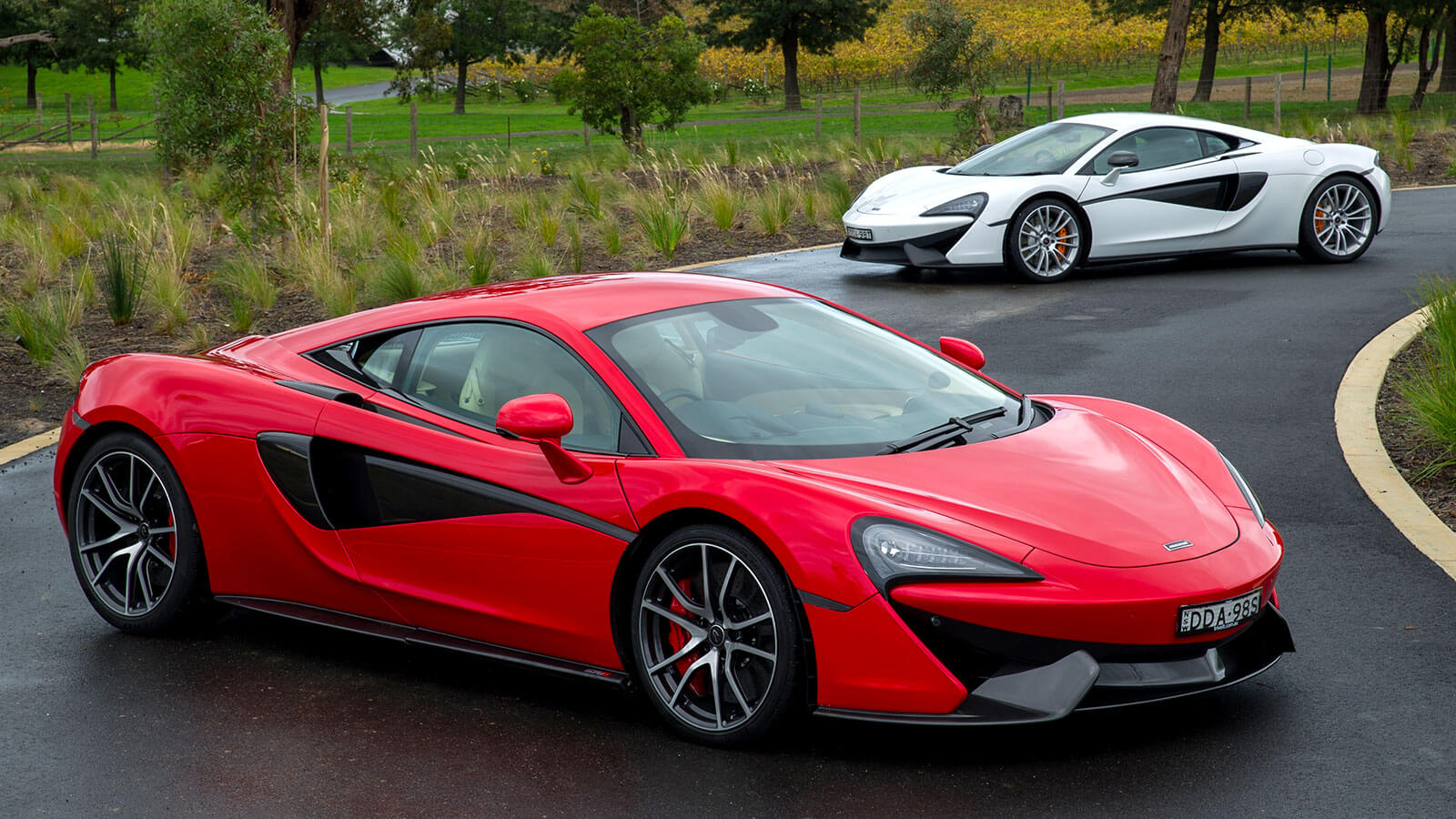 In Australia, Maserati actually fell 6.9 per cent to 483 units, but Levante’s arrival this year should turn things around for the trident brand.

Aston Martin’s global sales, meanwhile, climbed 1.9 per cent to 3687 units last year, with a strong 48 per cent lift in the last quarter of 2016 on the back of the launch of the all-new DB11.

As part of its Second Century corporate plan, Aston will launch one new model every nine months to the end of 2020, including the company’s first crossover later this decade, which will be based on the DBX concept from the 2015 Geneva motor show.

Aston sales dipped in Australia last year, with 115 cars sold, a slide of 11.5 per cent.