TESLA Australia has demonstrated its Autopilot system, a key technology in its race to a fully autonomous vehicle, during a Melbourne-based technology conference known as Pause Fest.

The United States-based start-up is the only car-maker in attendance this year, and it is also allowing participants to test drive its Model S at the convention where Tesla Australia communications and marketing manager Heath Walker is panelling a talk called Get onboard the SmartCity.

“We see ourselves as a technology company first and a car company second,” Mr Walker said. “Through that, we are able to provide software updates to the car and show off our technology at a place like the Pause festival.” 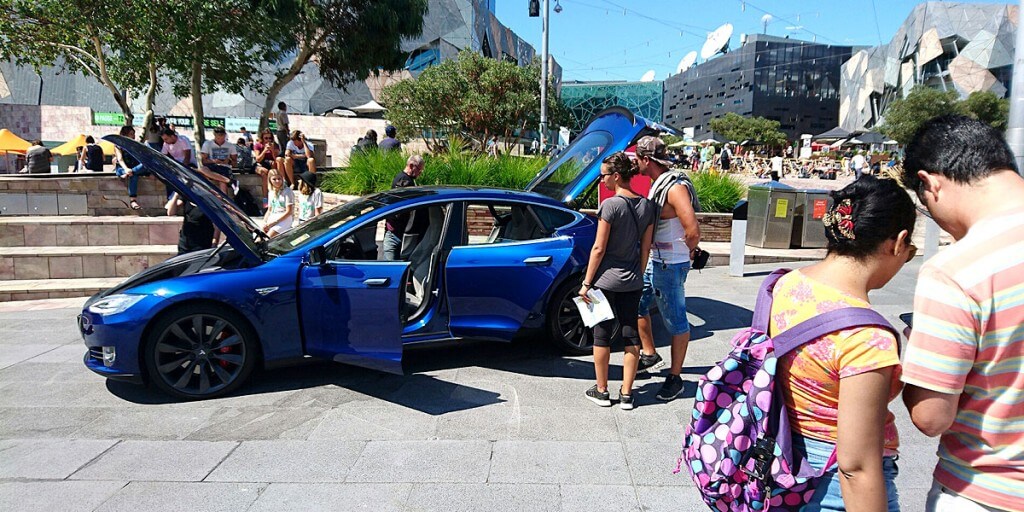 Pause for effect: Tesla is taking part in the 2016 Pause Fest where it is showing off its autonomous Autopilot system and allowing people to test drive the Model S.

The Autopilot technology was introduced in October 2015 as an over-the-air update to all Model S owners free of charge, allowing the car to navigate traffic on its own, given the right conditions.

Mr Walker explained that the system may not be best suited to inner city driving, but is smart enough to look for all the right data it needs before allowing the driver to activate Autopilot.

“Autopilot looks for multiple pieces of data to help it navigate,” he said. “The main thing is line markings, so lane markings on either side of the road, which is why the freeway is the perfect environment to utilise it. 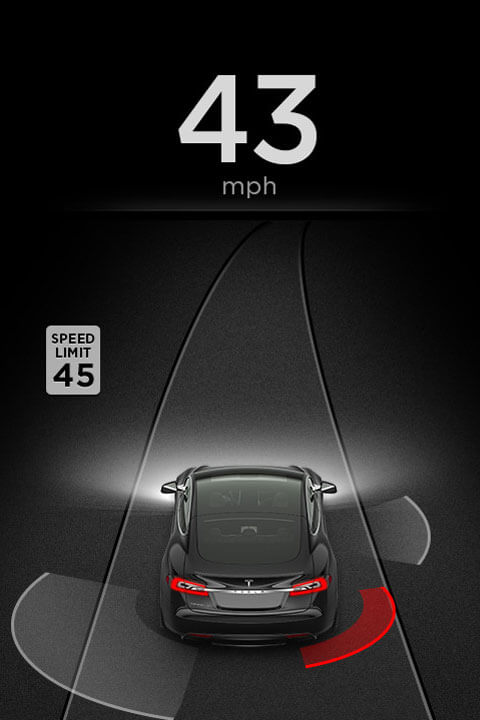 “It also picks up objects by the forward-facing camera, so anything from cars to other objects such as speed signs as well. Then the radar on the front picks up vehicles, which assists with the speeding up and slowing down of the vehicle, adjusting to whatever the traffic is.”

However, control is never too far away from the driver as a tap of the brake or throttle pedal, or a strong yank of the steering wheel will relinquish control to the driver.

Tesla is also quick to point out that both hands should always be on or hovering close to the steering wheel, even while the vehicle is turning itself around corners and weaving through traffic, and if the vehicle ever loses the necessary data for the Autopilot system to work, the driver will be warned and should be ready to take control.

Mr Walker highlighted the Autopilot system as a safety feature unique to Tesla and compared it to a traditional cruise control system.

“We see the Autopilot feature as a safety feature because the car is actually a better driver than humans through freeway traffic and long-distance travel,” he said.

“The Autopilot feature in the Model S allows people to relax whilst they are on their commute, so enjoy their commute rather than see the car in front and have to stop/start during that, but also enables relaxing long-distance traveling as well.” 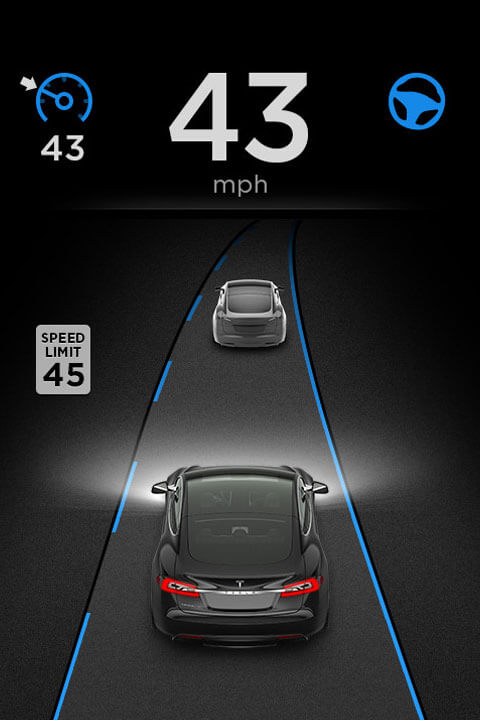 Fears about placing so much trust in a computer system while traveling at high speed in a two-tonne sedan were quickly allayed as Mr Walker said “the only time we’ve ever seen errors is when a human has actually disengaged it”.

The automatic acceleration and deceleration system only works when the front-facing camera can sense a vehicle, and the system cannot yet read traffic lights, but Mr Walker predicts these features could be added in a software update in the future.

“At the moment, the camera can recognise things like street signs, so it picks up the speed limit of the area and over time it won’t take much more for the camera to be able to read those (traffic lights) and progress Autopilot to the next level,” he said.

“The great thing about over-the-air updates is that we can release features as soon as they are available and have been tested in market.”

Although regulation can be slow to match the pace of technology, Tesla insists all its available features are fully legal to use and above board.

“We go through every market and look at what the road rules are and work with the road bodies to ensure that we’ve got the right features and the right operations within the vehicle,” Mr Walker said.

“Once they see it is a safety feature that makes the car safer, it’s very rare that we see any hurdles put in front of us.”

Tesla’s Autopilot system has taken a while to go live, with the hardware having been installed on all local Model S cars since going on sale in late 2014. 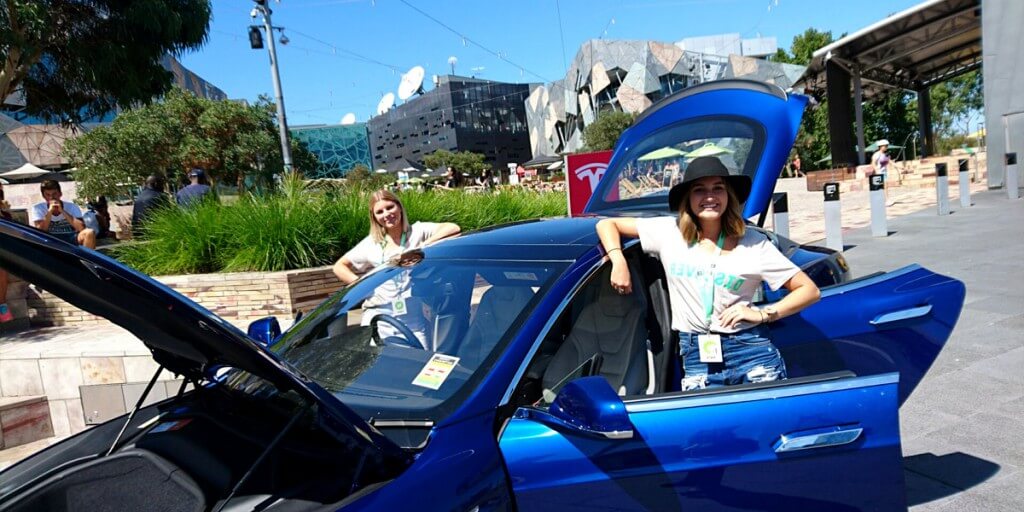 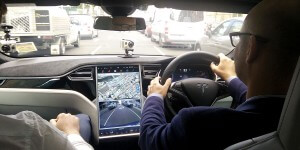 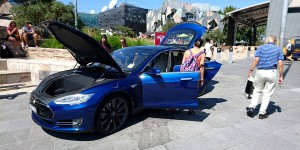 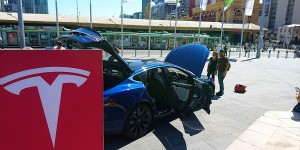 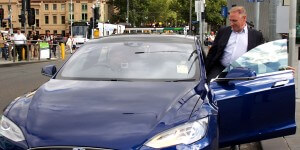 CEO Ron Gauci getting into the Tesla 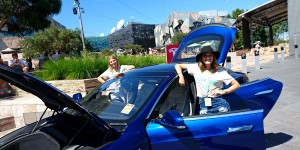 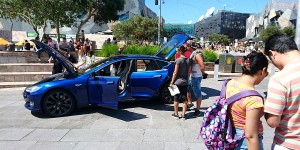