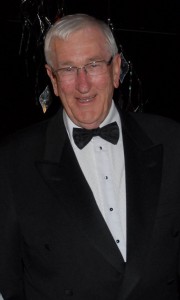 Honoured: Michael Tynan OAM kicked off his career in the automotive retail industry in 1966.

ONE of the retail motor industry’s most tireless supporters and champions, Michael Tynan OAM, has died aged 80 after a year-long illness.

Mr Tynan, who built up the Tynan Motor Group with his family to become one of the largest employers in Sydney’s Sutherland Shire, started in the car business selling Mazda cars from a petrol station in 1966.

Mr Tynan was raised in Kogorah and, after working as a farm hand, gravitated into selling jewellery. He ultimately set up as a jeweller and watchmaker in Kogorah which he did for 12 years during which time he became a specialist in precious stones.

He had also developed an interest in rallying which was only a small step into the car business when Westco Motors, then the New South Wales Mazda distributor, asked him to assess the Mazda 1500 Luce in a rally. His glowing report led to him being appointed the Mazda dealer for the Sutherland Shire.

In an interview last year for Automotive Dealer magazine he said that his greatest achievement was his family’s involvement in running the Tynan Motor Group and that his succession was in very safe hands.

Mr Tynan, a member of the board of the NRMA for 12 years, was highly regarded for his community work in The Shire with many sharing the view that he often put the welfare of others before himself. He was a long-standing and hard-working supporter of the Calvary Hospital for more than 35 years, was chairman of the hospital, was on the national board of Calvary Health Care and supported a host of other charities and good causes.

Mr Tynan was a strong supporter of the Liberal Party and sat as a councillor on the Sutherland Shire Council for 18 years from 1974. He was appointed president (mayor) from 1975-78 and from 1988-89.

Throughout his career Mr Tynan was constantly pushing for a better deal for motor dealers and was very committed to ensuring dealers had a voice in their relationships with car companies and governments. He worked tirelessly through various motor industry associations and was a staunch supporter of the new ‘dealer-only’ AADA.

His desire for strong and equal business partnerships between car companies and their dealers took an early reality check in the 1990s when he famously took on Mazda Motors which failed to renew the Tynan franchise agreement after 35 years as a Mazda dealer alleging that the Tynan’s Mazda premises were not up to the required standard. The legal challenge that followed was settled by Mazda on the day of the final court hearing including payment of Tynan Motors’ legal costs.

He described the need to take action to stand up for his rights in the dispute was the low point, and the biggest disappointment, of his career.

Associates and colleagues remember Mr Tynan as an extremely loyal man. They described him as a man who never gave up on, and always backed, the people he believed in. He is remembered for his happy knack of giving people his full attention in conversation.

In addition to attaining the Order of Australia (OAM), Mr Tynan was also awarded the Queen’s Medal and Australian Bicentennial Medal in recognition of his services to local government.