Mr Rowan was Dyson’s CEO between 2017 and 2020 when the British tech company was planning to begin production of an electric vehicle. The idea was later dropped.

Before working at Dyson, Mr Rowan was COO of BlackBerry maker Research In Motion.

The 56-year-old Scottish executive will succeed Mr Samuelsson, 70, on March 21, Volvo said in a statement.

Mr Rowan is currently CEO at U.S-based consumer electronics brand Ember Technologies, a job he has held for less than a year.

He is taking over just months after Volvo wrapped up its IPO, the biggest in Europe last year.

Mr Rowan will face the task of steering the Swedish automaker, which is majority owned by China’s Geely Holding, toward its goal of getting half of its global sales from full-electric cars by mid-decade and be an electric-only brand by 2030.

Volvo said Mr Rowan’s global experience in digitalisation, disruption, innovation, engineering and supply chains will be valuable for the automaker to realize its strategic ambitions.

Mr Samuelsson joined Volvo’s board in 2010 and has been CEO at the car-maker for almost 10 years, with his contract coming to an end this year.

Polestar, in which Volvo owns 49 per cent, aims to go public through a reverse merger with special-purpose acquisition company (SPAC) Gores Guggenheim. The deal is expected to close in the first half of 2022.

Mr Rowan was Dyson CEO from 2017 to 2020 and chief operating officer from 2012 to 2017. During his time at Dyson, he delivered record growth and financial results for Dyson, according to Volvo’s media release.

Mr Rowan worked for Research In Motion as COO from 2008-2012. During the period the company boosted revenue from $A7 billion to $A28 billion.

From 1998 to 2005 he was vice president of operations at Flextronics, a $A35 billion global manufacturing company with more than 200,000 employees at more than 100 factories worldwide.

Mr Rowan was born in Glasgow. He studied mechanical and production engineering and electrical and electronic engineering at Glasgow Caledonian University and Glasgow School of Technology.

He holds a master’s degree in business with supply chain management and logistics from Northumbria University, northern England. 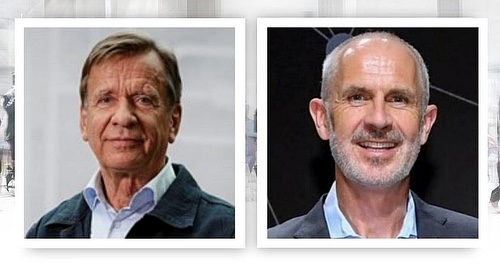