HONDA has fallen from the top of the Australian car industry in terms of aftersales service to below average, leaving Mazda as the clear benchmark among the mass-market brands in the influential JD Power 2016 Australia Customer Service Index (CSI) Study released today.

Honda’s shock result will reverberate through its Tullamarine headquarters in Melbourne, as well as its national dealer network, as the premium-oriented Japanese marque – which has long relied on owners remaining faithful to the brand – attempts to dramatically improve sales and market share, and bring in many first-time customers, with new-generation models like the Civic and forthcoming CR-V.

The reborn $420,000 NSX supercar, first deliveries of which begin early next year, will also serve as a major drawcard for Honda, and although sold through only a handful of dealers and offering a specially tailored aftersales care program, the hi-tech super-coupe embodies core values of the entire brand in areas such as quality, craftsmanship and a commitment to high-level customer service. 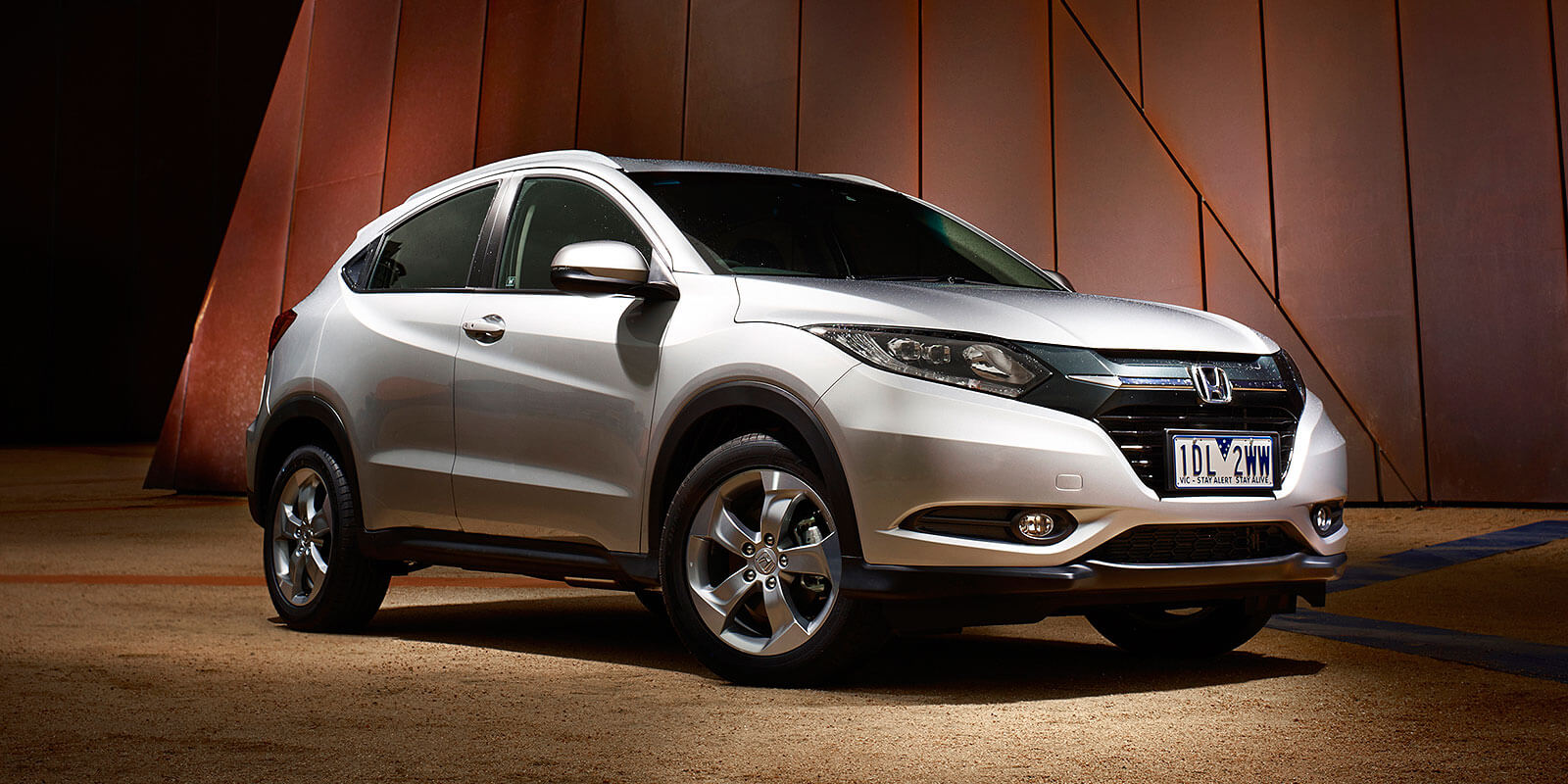 Downturn: Honda’s HR-V might be a star performer on the sales charts, but JD Power’s CSI study raises a question mark over how well its owners are being treated when they return for servicing.

The CSI results, which offer a unique insight into how well Australia’s leading car companies are treating their customers at the service department, show that Honda has plunged from first place to sixth in the space of 12 months – dropping 10 points on JD Power’s 1000-point scale, from 816 to 806 – while every other mass-market brand included in the study, bar one, recorded either a static or positive result and pushed the industry average up beyond 800 points (to 809) for the first time.

The other brand in negative territory is Volkswagen, which continues to struggle at the bottom end of the table, falling back to 11th place this year with 789 points – down from 791 last year – while Holden (on 803) was the biggest improver, recording a 22-point increase to push up from 11th to seventh, although it remains behind the industry average.

Last year, Honda recorded the biggest single gain of any brand (+29 points), while Holden’s commendable rise this year continues a rollercoaster ride in CSI terms for the lion brand, which is investing heavily across its business in an effort to retain its customer base, and bring new buyers into the fold, as it transitions from local manufacturer to national sales company by the end of next year.

Time will tell whether Honda’s slump – seen in all five areas examined in the study: service quality, vehicle pick-up, service adviser, service initiation and service facility – will prove to be an anomaly or the beginning of a deeper trend in which its results reflect larger variations in customer experience and dealership performance. 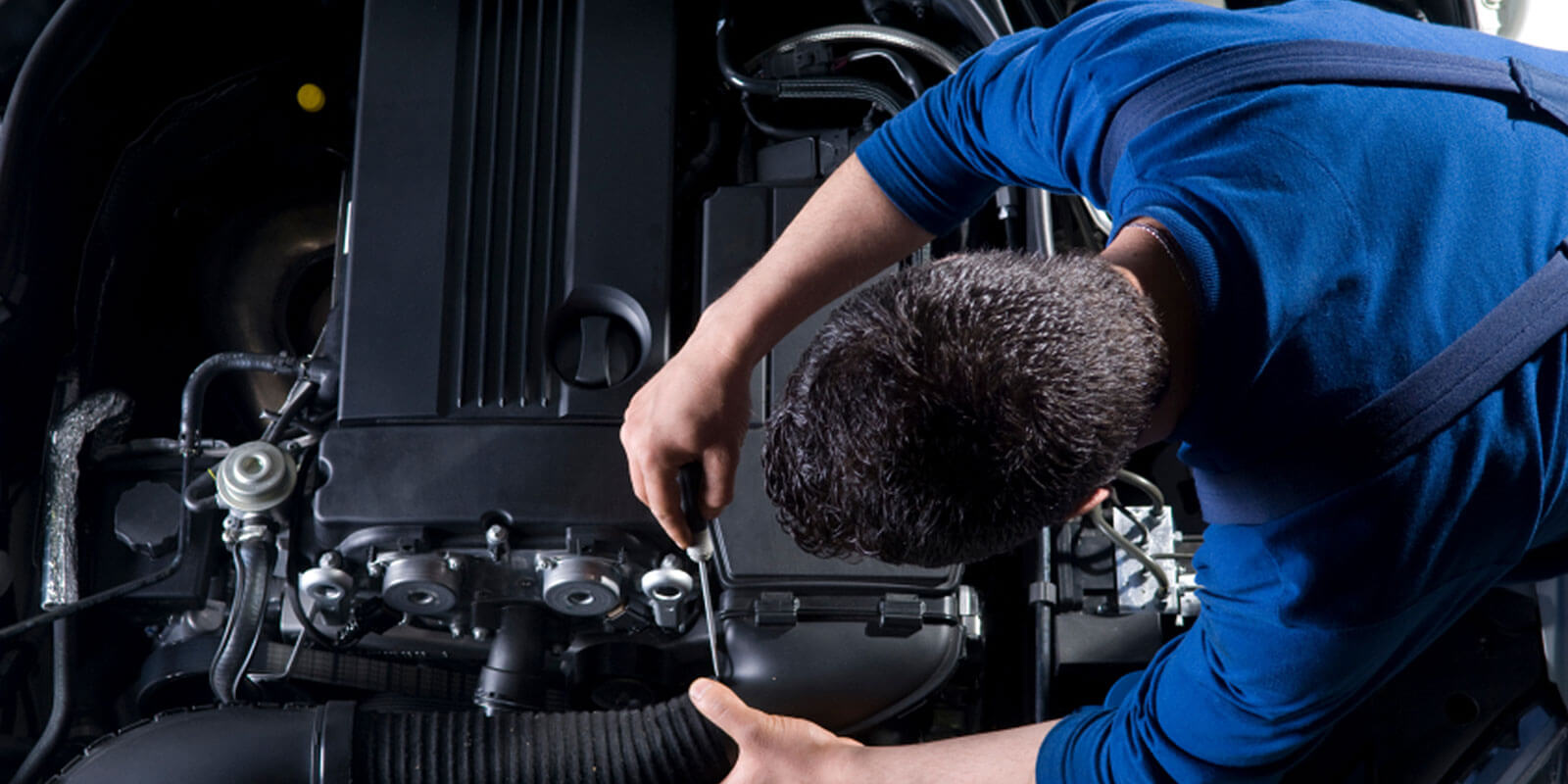 Service quality accounts for 25 per cent of overall satisfaction in the CSI study – the biggest single factor – and JD Power analysts have told GoAuto that Honda was down 16 points in this area compared to 2015.

Consistently strong performances clearly separate the best brands from the rest, and Mazda has again embodied this approach with a 21-point improvement to 834 and undisputed industry leadership in terms of aftersales service – its fourth top ranking in the seven years the study has been conducted.

This follows Mazda’s first place in the inaugural JD Power Sales Satisfaction Index (SSI) Study released in September, which measures customers’ experience with the new-car buying process and reinforced its position as the benchmark brand at both the front and back end of the dealership.

Digging deeper into the results, the latest CSI study reveals Mazda has the lowest percentage of customers who are highly dissatisfied/disappointed with their dealings at the service department (19 per cent, based on index scores of 733 points and below), contrasting with Honda which has 25 per cent, VW with 30 per cent and Suzuki and Jeep which both have more than a third of customers (38 and 35 per cent respectively) reporting less than satisfactory experiences.

Toyota (824), in second place overall, and Subaru (816) in third have continued to impress with their CSI performance, climbing 17 and 16 points respectively this year, while Kia (812) has maintained its position in fourth place – and bragging rights over fellow South Korean brand Hyundai – with an eight-point improvement that keeps it above the industry average and ahead of various big-name brands that might have higher sales volume but clearly cannot match Kia in terms of customer satisfaction.

Hyundai (807) remains just behind the industry average with a 12-point improvement this year, placing ahead of Honda and Holden as the big Korean looks to cement its position as a top-three brand for outright sales and market share. 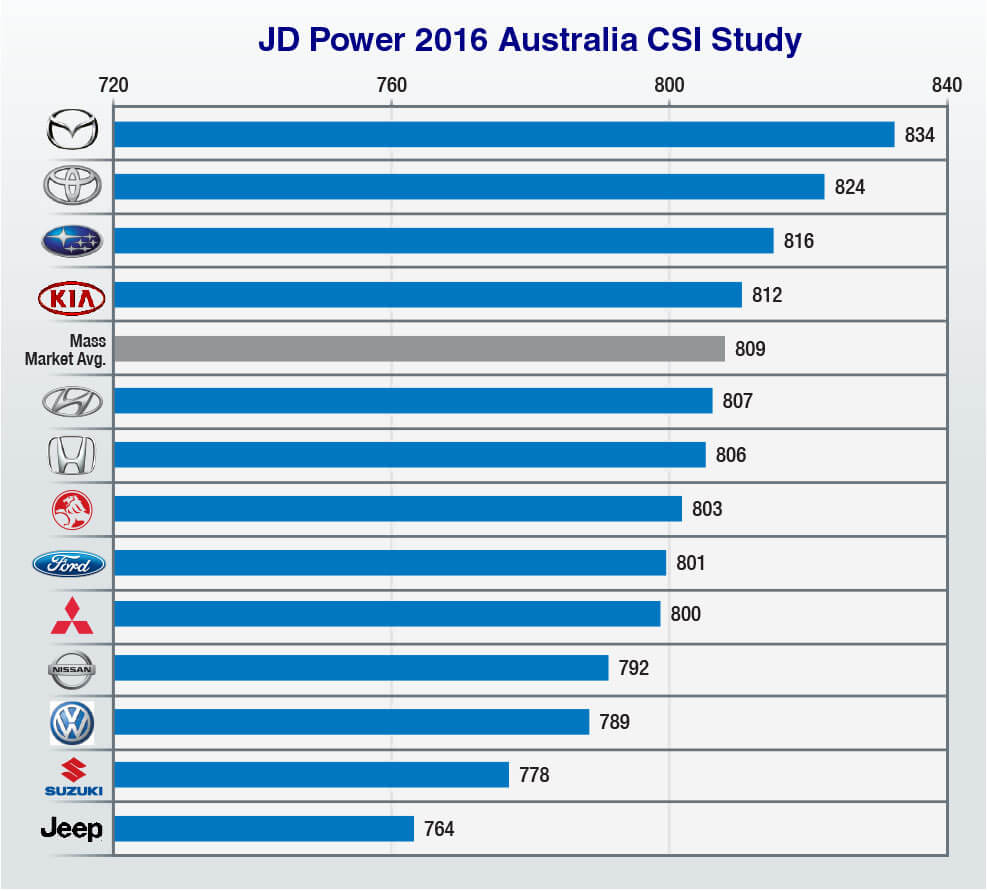 Ford (801) and Mitsubishi (800) have maintained their close positioning in eighth and ninth place respectively, the Blue Oval up nine points as it finalises its transition to a fully imported range and enjoys double-digit sales growth this year, and the triple-diamond brand climbing eight points as it undergoes its own transition to what is now a company focused heavily on SUVs and the Triton utility.

Nissan (792) was on even terms with Ford and Mitsubishi last year but has failed to improve on its CSI index score over the past 12 months, which will be duly noticed at its Dandenong HQ as senior management continue to work on improving its brand image, model mix and retail performance.

Volkswagen’s poor standing in the CSI study looks to be at least partly related to the diesel emissions-rigging scandal engulfing the German brand in Australia and further afield, its negative result coming after an impressive 26-point improvement in last year’s study that appeared to reflect the company’s efforts to improve its aftersales service.

JD Power’s findings indicate that VW customers’ experience in the areas of service initiation, their dealings with the service adviser and the vehicle pick-up process were worse than in the quality of the service itself and the dealerships’ facilities.

In particular, VW fell 13 points in the area of service initiation and had the lowest percentage of customers who were delighted with either the ease of arranging a service or the flexibility shown by the dealer in accommodating the owners’ schedule.

There were no questions specifically related to the emissions crisis, but issues affecting a particular brand – including recalls – do have an impact on customer attitudes, perceptions and, ultimately, survey responses. 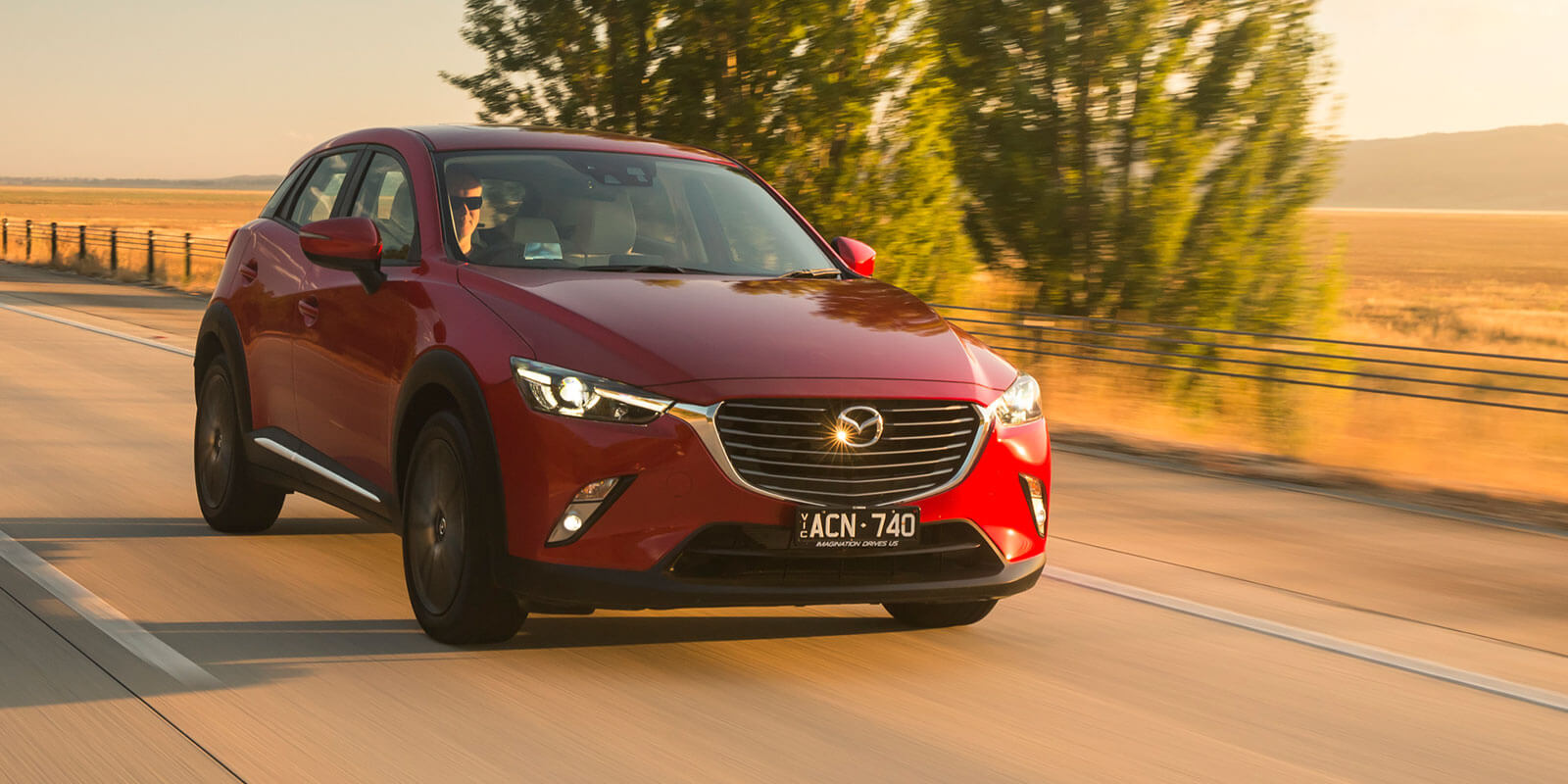 Suzuki (778) has recorded a useful 16-point improvement in this year’s study, despite its lowly position, while Jeep remains at the bottom of the table with 764 points, up seven points compared to last year.

The next 12 months will be pivotal for Fiat Chrysler Automobiles (FCA) Australia as this year’s results – coming from surveys fielded from August through September – are unlikely to reflect the company’s relatively new program that aims to slash customer complaints about quality and repair work on its vehicles across the Jeep, Chrysler and Dodge brands.

Peugeot and Renault were also included in the study but not ranked due to small or insufficient sample sizes.

The increase in the CSI industry average this year was driven by improvements in service initiation (+14 points), service quality (+13 points) and service adviser (+12 points).

JD Power says that dealerships’ focus on improving deployment of ‘service standards’ is paying dividends, with 20 per cent of customers this year reporting that they received at least 15 or 16 service standards – up from 15 per cent in 2012. 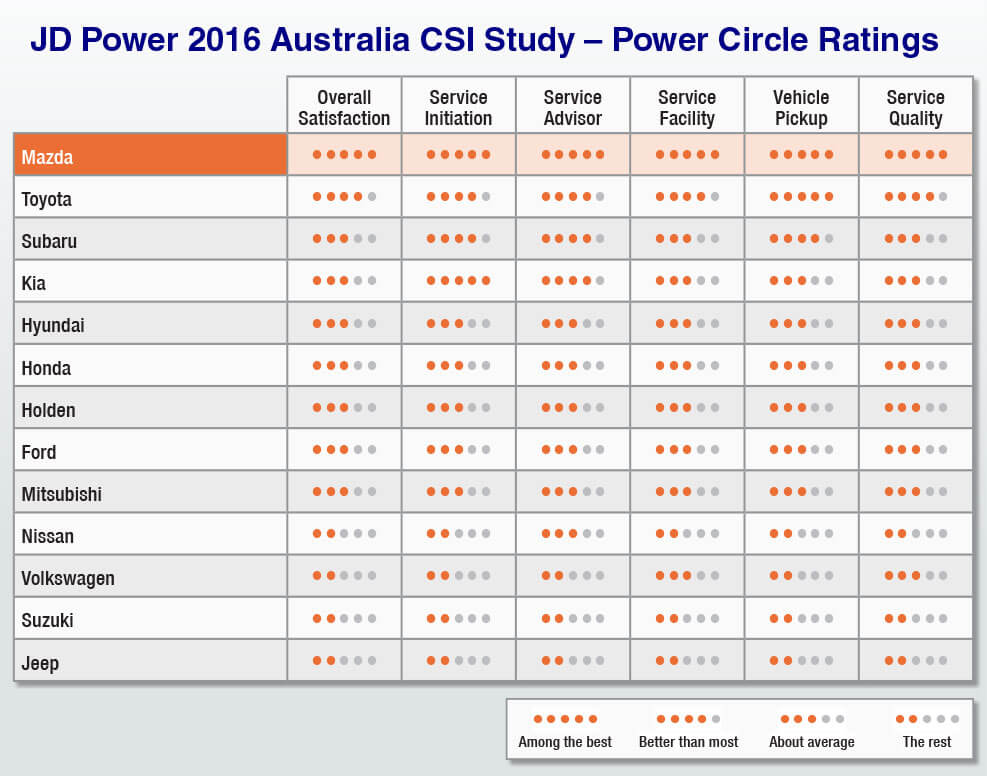 For example, returning the vehicle washed and vacuumed – a key service standard – can increase satisfaction by as much as 40 index points.

Among other key findings, vehicle owners in South Australia report the highest satisfaction (829 index points), whereas those in the ACT have, on average, the lowest overall satisfaction (788).

Providing a detailed cost estimate has a significant impact on customer satisfaction, reaching 821 index points for the 68 per cent of customers who received this type of estimate, and dropping to 758 points among those who did not.

Communicating with customers ahead of a scheduled service also makes a notable difference. In this year’s study, 62 per cent of customers were notified by their dealer about the forthcoming routine maintenance, up from 55 per cent in 2012.

Overall satisfaction among customers who were notified was 827 points, compared with 780 among those who did not. 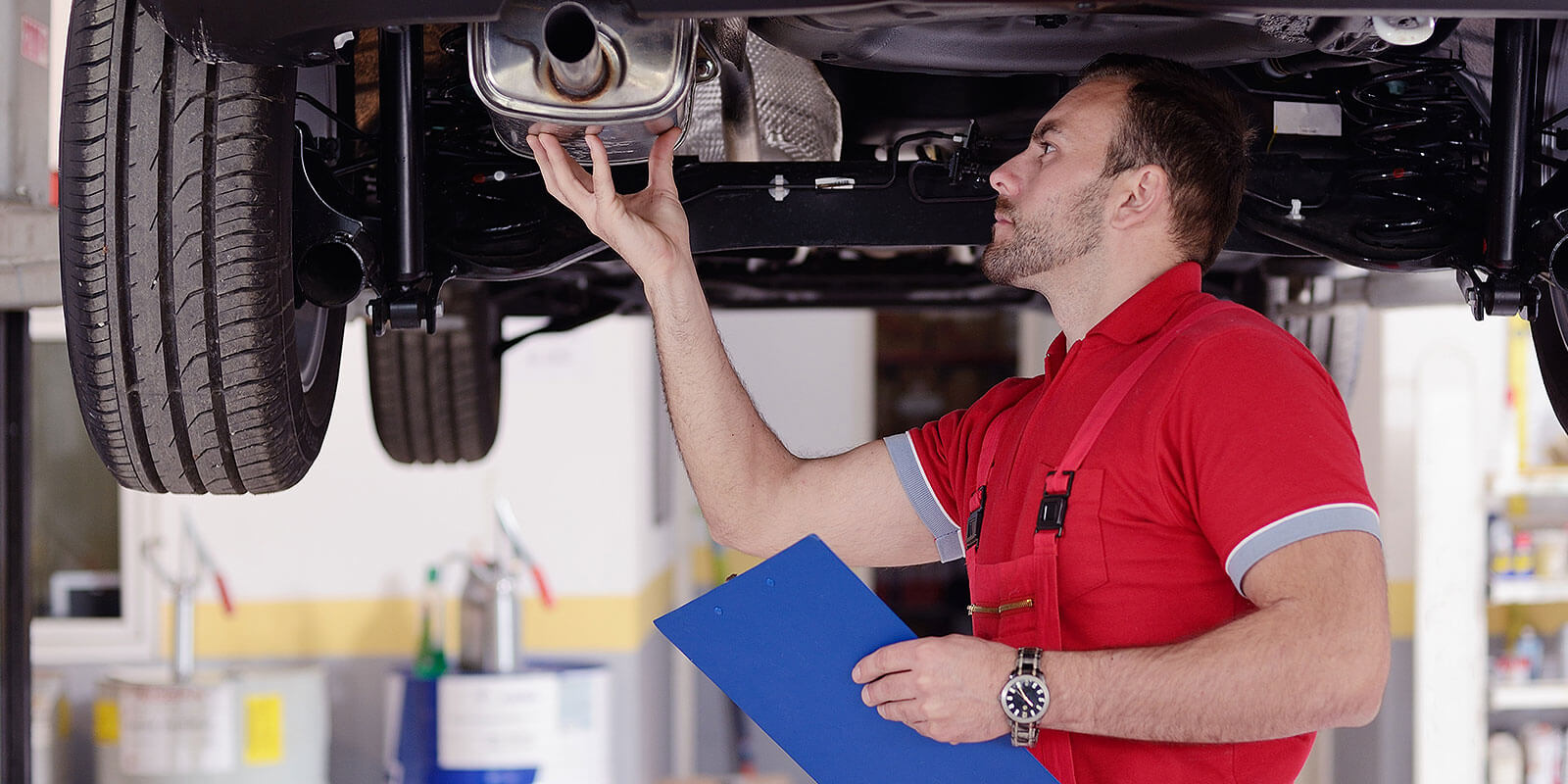 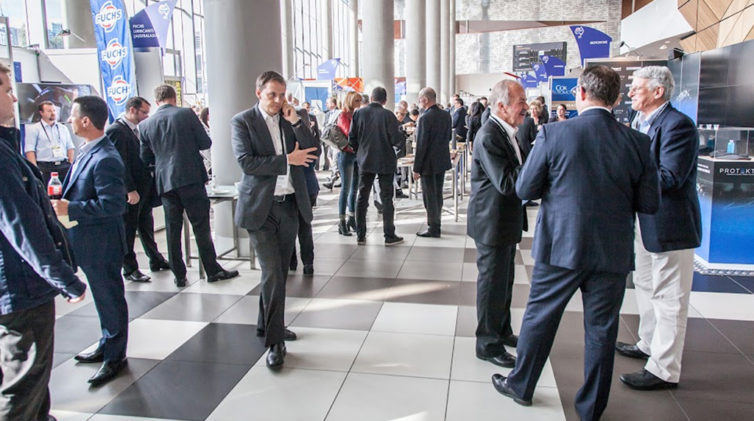 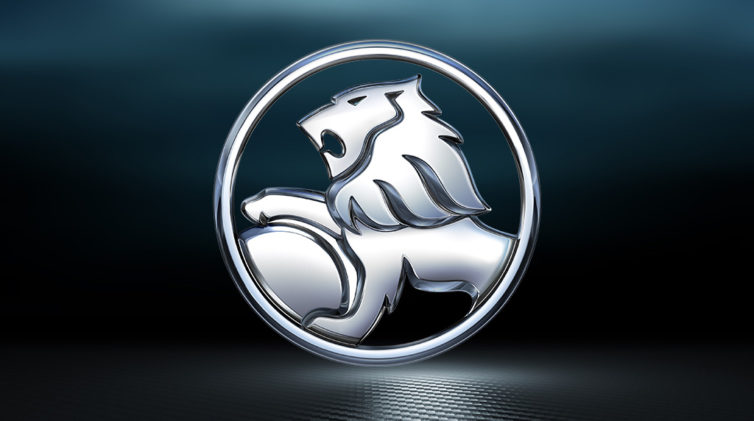 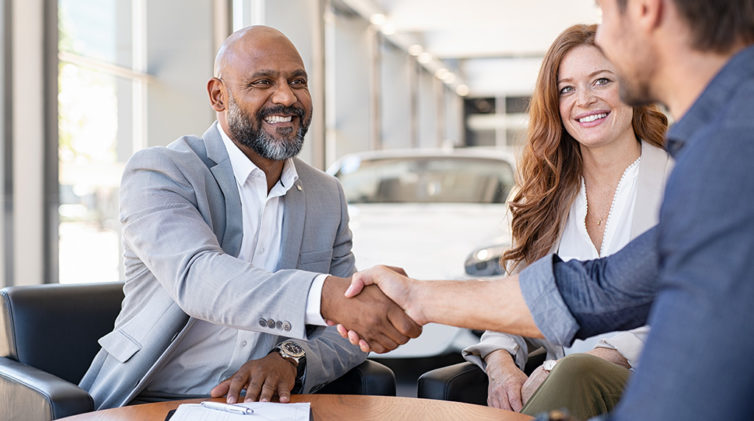