INFINITI Cars Australia is confident its strong sales growth will continue but does not anticipate the current boom, which places it almost 50 per cent ahead of last year’s running rate, will be sustainable.

The company’s product planning manager Bernard Michel told GoAuto at the launch of the Q60 Red Sport this month that a combination of retail network expansion, new model additions and earlier revisions of its pricing structure and variant mix on select model lines was now paying dividends for Nissan’s fledgling luxury brand.

Infiniti launched its updated Q70 large sedan in February last year, followed by the Q30 and QX30 compact crossovers and the new-generation Q60 mid-size coupe in the second half. 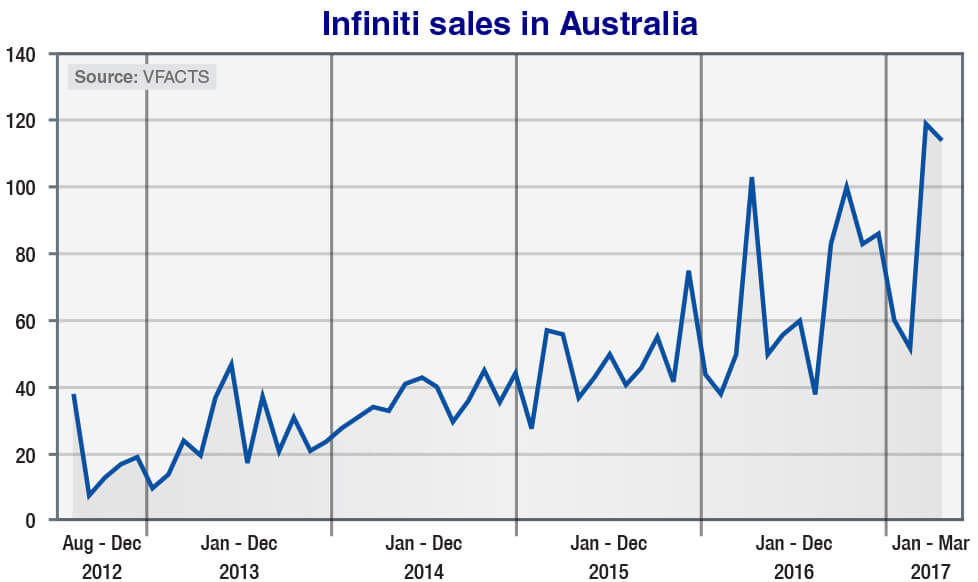 This year, the brand has followed up with the high-performance Q60 Red Sport – a key brand-building model – ahead of an update for the higher-volume Q50 mid-size sedan due later in the year.

A compact sedan and small and medium SUVs remain the most obvious gaps in its line-up – the latter was previewed by a near-production concept at the Detroit motor show in January – while other core-model bases are already loaded with the large QX70 and upper-large QX80 SUVs.

Infiniti posted 807 sales last year, up 40.6 per cent on 2015 as the new models made their presence felt, particularly in the final few months, and this year the brand has grown a further 49.2 per cent after the first quarter of trading, with 285 sales already on the board.

Asked whether Infiniti could sustain the current level of growth, which would amount to 1200-plus annual sales, Mr Michel said: “I think we can sustain some growth (but) I don’t know if it’s going to be that steep.”

This year’s improvement comes as the QX70 has effectively sold twice as many units as the first three months of last year – 89 compared to 43 – to become the brand’s top-selling model, while the Q60 has likewise almost doubled sales from 16 to 28 units. 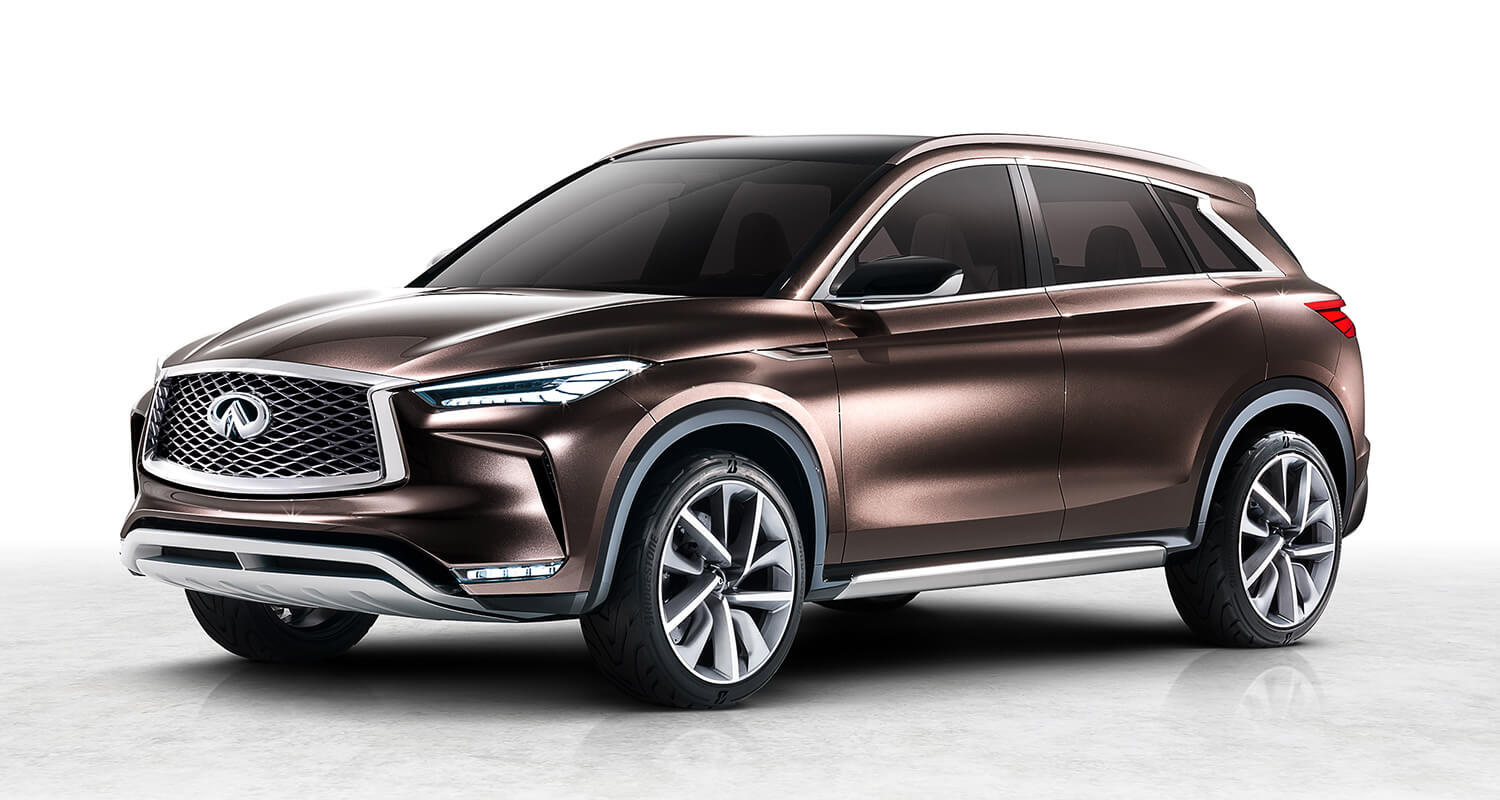 Next step: The QX50 concept shown in Detroit earlier this year previews the all-important production mid-size SUV that is due to go on sale here in 2018.

The Q30/QX30 twins have added 76 sales – all incremental volume – while the QX80, which also looks to be in line for a significant update following a concept shown in New York this month, has provided a positive return, up five units to 20 after the first quarter.

These have all helped offset a considerable 37.9 per cent fall for the Q50 (down to 64 units YTD) – a worrying sign given this has been Infiniti’s top-selling model in recent years, accounting for around 300 units per annum – while the Q70 has fallen by a similar margin (42.9 per cent) with just eight sales so far this year.

According to Mr Michel, next year’s addition of the all-new QX50 will drive sales growth, while a new flagship for the Q60 range, set to tackle the BMW M4, will help drive brand value.

He cited the expansion of the dealer network as a key aspect to further growth. The brand now has eight retail points nationwide, with a further three likely to follow two other new outlets – a dealership in Doncaster (Melbourne) and a service centre in Canberra – that have opened their doors in recent months. 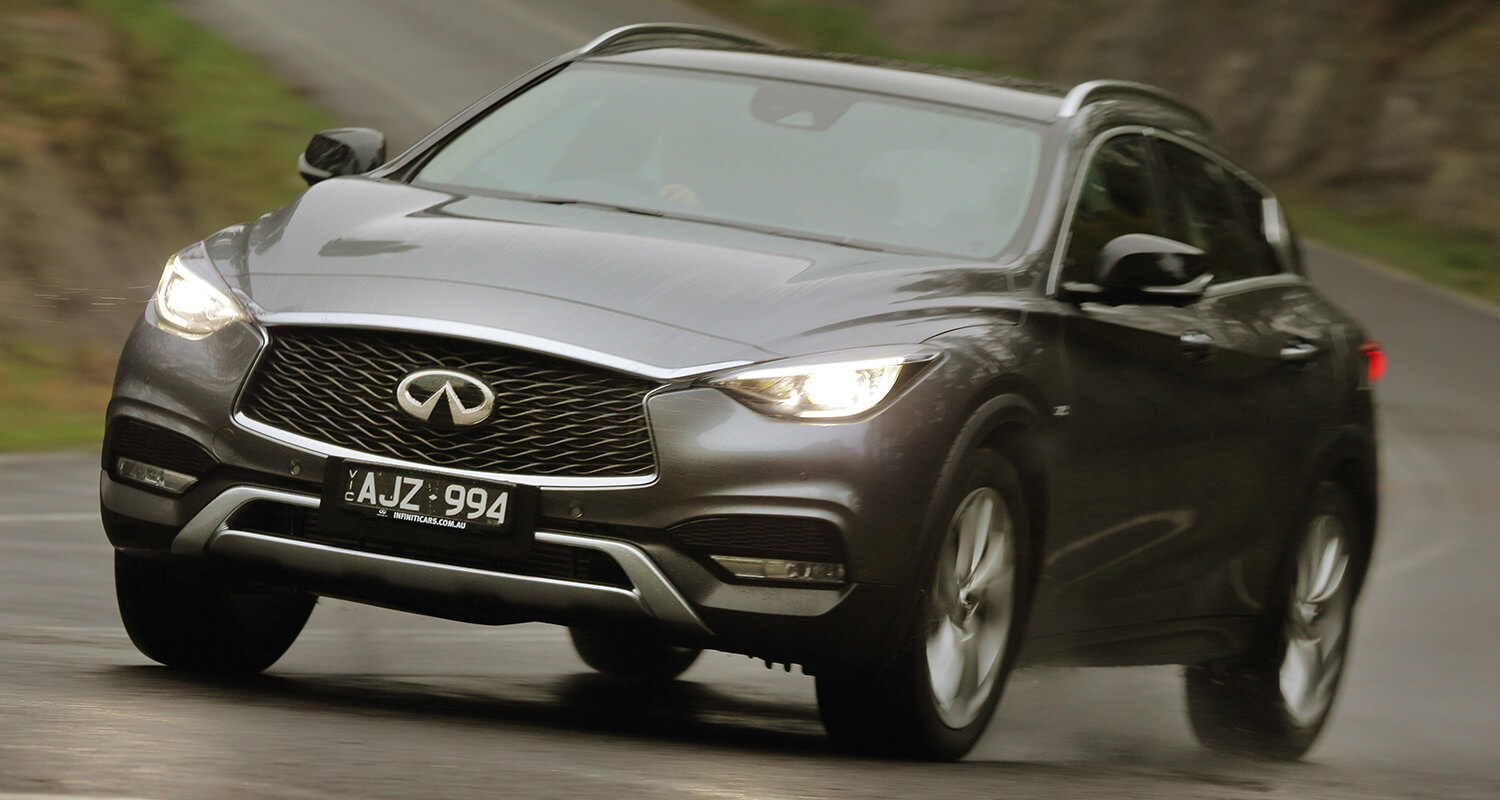 “We’re seeing tremendous growth just from opening new dealers,” Mr Michel said. “The feedback we were getting from very early on is that you don’t have a sustainable network to support the customer base. So we’ll expand that.

“We’re probably short of a Melbourne CBD dealer. Queensland you’ve got Gold Coast and Brisbane (but) we might see some further representation up north. I think the only major city (we are missing) is Hobart, which we may look at.

“That would certainly be on the cards to have a national presence.

Mr Michel said there were no plans to cut prices or reposition the brand below more established rivals in an effort to drive continued sales growth. 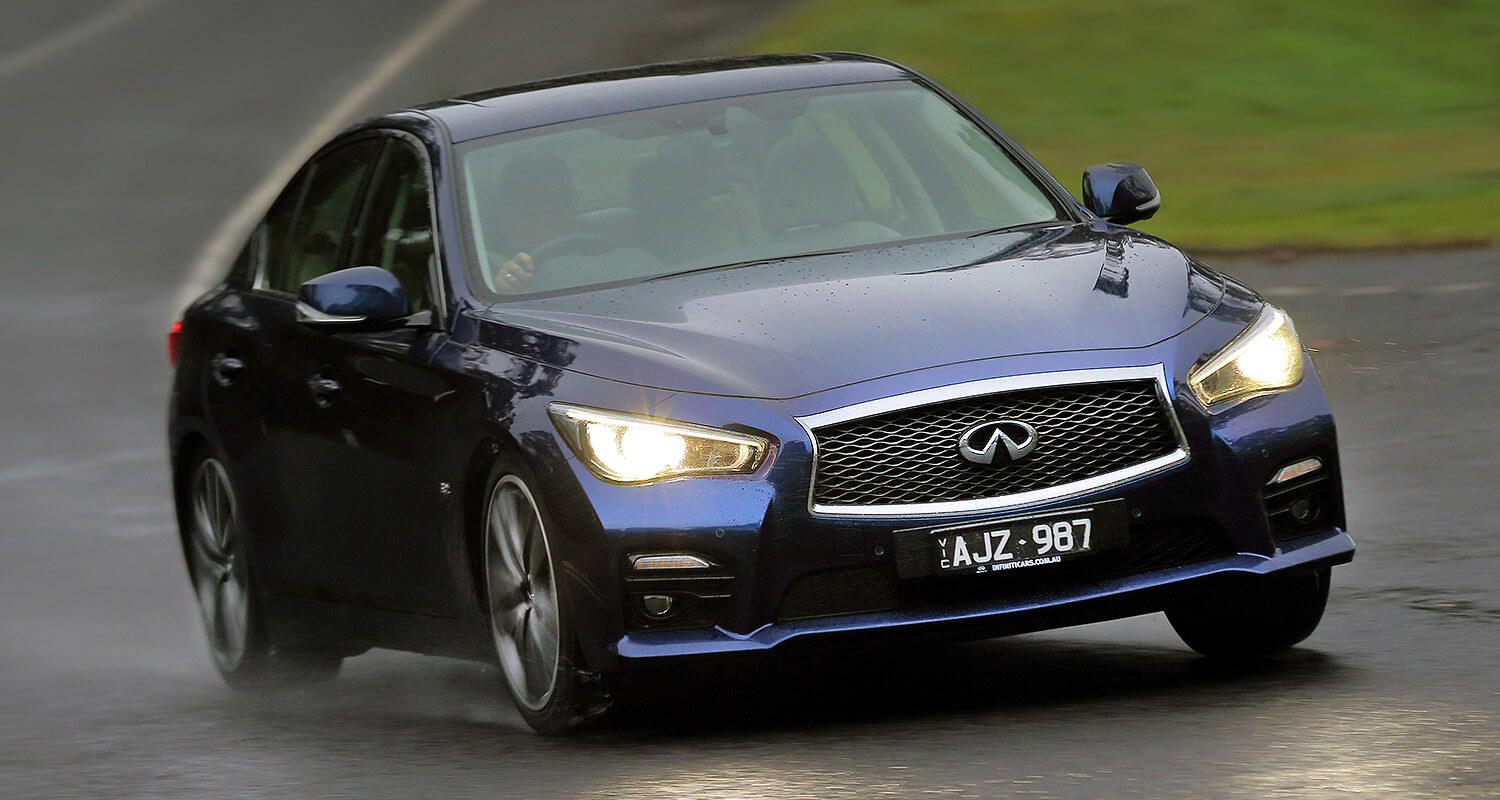 “Initially there were some (pricing) issues but we’ve addressed all of those and we think we’ve got a pretty good line-up going forward,” he said.

“Have we given any thought to repositioning our cars? No.

“I think it’s more about the network, coming off the back of three dealers and trying to get sustainable volume off those dealers when research tells you people will not travel more than 30 minutes (to a dealership).

“So I think, and we’ve seen that last year and with our numbers growing, albeit small, that once you open a dealership in the right location people are seeing the value in the cars.

“We’re still expanding the network and I think that’s going to be the catalyst for the next onslaught of sales.”

This year the brand is averaging 95 sales a month, with February and March both above 100 units.

By Daniel DeGasperi and Terry Martin 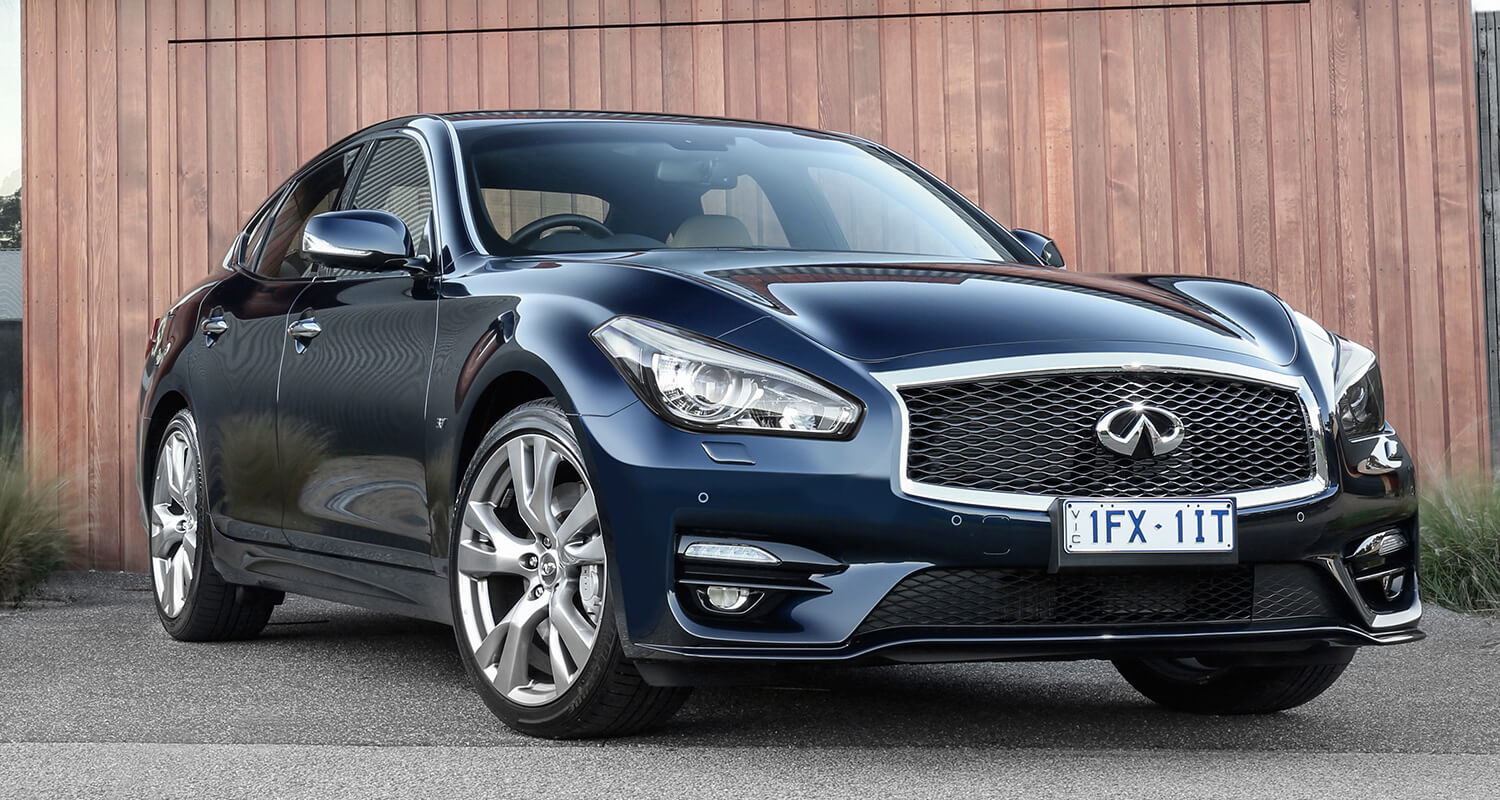