THREE generations of the Ireland family, renowned automotive retailers from North Queensland have become a recipient of the AADA’s lifetime achievement award with the award accepted by Tony Ireland and Richard Ireland OAM, grandsons of the founder Francis Ireland.

The Ireland family has a proud century-long history in Australia’s retail automotive industry that began with Francis Ireland MBE who went from a 14-year-old mending bicycle tyre punctures in 1912, to mechanic, garage foreman, and finally taking over the garage in 1923.

He became a Chrysler dealer in 1924, followed by Pontiac, Oakland and Whippet. He was then a GM dealer continuously from 1931, opening a second dealership in Cairns in 1948.

In 1952 he represented the Queensland Automobile Chamber of Commerce at the Motor Trades & Repairers Conference in Paris.

His son Ron Ireland OAM began his career as an apprentice mechanic in 1942, taking over the day-to-day general management of the family business at age 25. 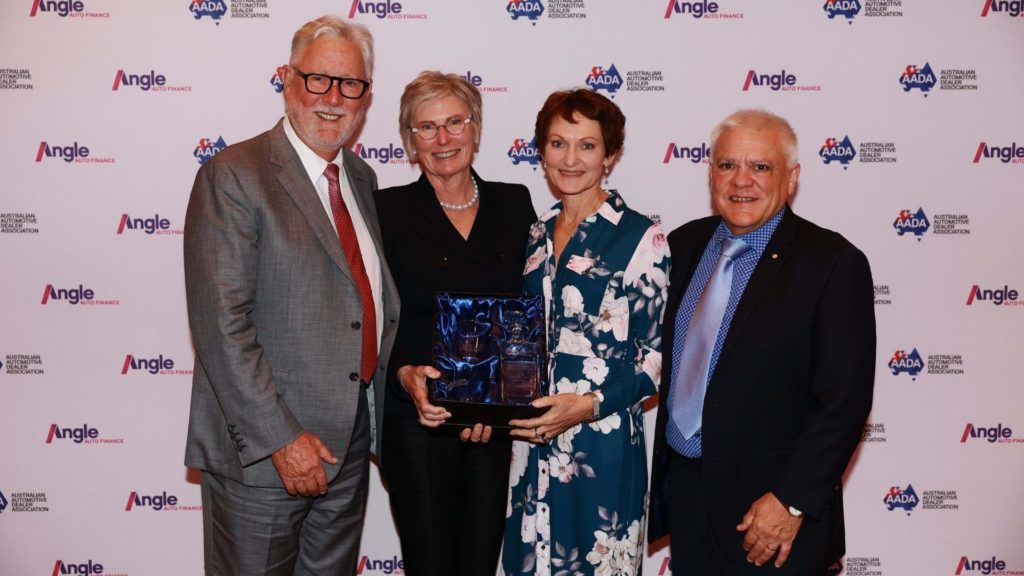 Tony and Merrilee Ireland (left) with, Richard and Maria Ireland

Over more than 60 years, Ron led the family group. He served for many years on the “GMH Managing Director’s First Dealer Advisory Council”, a format that set the blueprint for almost all automotive dealer councils in Australia.

Ron received the Time Magazine Quality Dealer Award for Queensland in 1981 for his “outstanding performance as an automotive dealer and a valued citizen of his community”.

Tony Ireland was managing director of the Tony Ireland Group of companies in Townsville, which included several automotive dealerships, both passenger and commercial, among more than 30 diverse brands across a range of industries.

The Tony Ireland group is still active, with a dealership in the Atherton Tablelands.

David Ireland is a director of eight family group companies and is dealer principal for Jeep and Ram Trucks in Cairns.

Richard Ireland is a director of nine family group companies and dealer principal for Mitsubishi, GMSV and Isuzu Trucks in Cairns, as well as joint managing director of the Ireland Group since 1995.

He has served on 15 industry boards and committees over 32 years, including MTAQ, AADA Queensland and the Mitsubishi Dealer National Council.

The family’s community contributions are too extensive to mention – a century of outstanding contributions to the retail motor industry and no sign of slowing down.