MANY reasons have been put forward for the demise of Holden but in the end, once it was decided to close the Elizabeth plant, the company was brought undone by an absolute shemozzle in marketing and Holden nameplates.

In 2018, Holden’s then new director of marketing, Kristian Aquilina, told GoAutoNews Premium that in the lead-up to his appointment, the public had become confused with what nameplates Holden had in its showrooms.

He had been helicoptered in from New Zealand where Holden was holding down a market share of nine per cent and the Australian dealers wanted him in charge of the marketing direction because he looked like he knew what he was doing. But he was handed the poisoned pill.

At the time, a few of us had been conducting straw polls with friends, relatives and associates; they could recall some longstanding Holden nameplates but, apart from the Commodore, most had no idea of what some of Holden’s core models were called anymore.

People struggled to name Holden’s equivalent of the Ford Focus or the Mazda3, or the Mazda2 or the Hyundai i20 or the Ford Ranger or Ford Everest. Mostly they came up with Holden nameplates that were well-known but had been discontinued.

And that was not surprising.

Think back to 2010. Holden was fielding 22 nameplates/models back then but it was in the process of retiring or had just retired 10 of them – names that were all pretty much imprinted on the minds of car buyers over a long period as Holdens.

The entrants on the way out that year included Adventra, Astra, Monaro, Rodeo, Statesman, Vectra and Viva and various derivatives of these. Fortunes had been invested in these names. They were successfully imprinted on the public consciousness but no longer in Holden showrooms.

That left 12 nameplates: Barina, Barina Spark, Caprice, Captiva 5, Captiva 7, Colorado (4×2 and 4×4), Combo, Commodore, Cruze, Epica and Holden (Commodore) Ute. But only one of these survived the past 10 years…

By mid-decade the Astra returned as the Astra Sport and the convertible Cascada was added but only lasted a couple of seasons. The Astra sedan was back by 2016 but the Astra Sport was retired. The Barina stayed on but the Barina Spark became just the Spark.

Later the Captiva was also retired and Trailblazer was added. So was Equinox.

Are you keeping up?

In 2018 the Caprice finally stopped being sold as the plant ran out of steam and the Commodore returned to its 1980s German roots but now ultimately built by a French car-maker. The popular Cruze (confusingly, the more recent sedan and hatch, not the previous Suzuki-built mini-SUV iteration with the same name) was gone by that time as well.

At this time the Spark was running down and the Barina would not last the year.

The Acadia, a GMC truck derivative, was added in 2018 as well.

What is important to understand is that each of these nameplates needed to be supported in the market with advertising and promotion – a very expensive exercise per entrant.

It is easy for a company like Toyota to support the broadest number of entrants in this market because Toyota has a share nearly double Mazda and Hyundai (which are number two and three in the rankings).

But Holden was heading for four per cent and supporting all these entrants would have been more and more difficult with the loss of revenue that comes with each percentage point drop in market share.

That massive mishmash of activity can be summarised as follows (see below) and just shows how, at a time when the mainstay Commodore was winding down, Holden was faced with a crisis of nameplates and a thoroughly confused public that no longer knew what it sold. 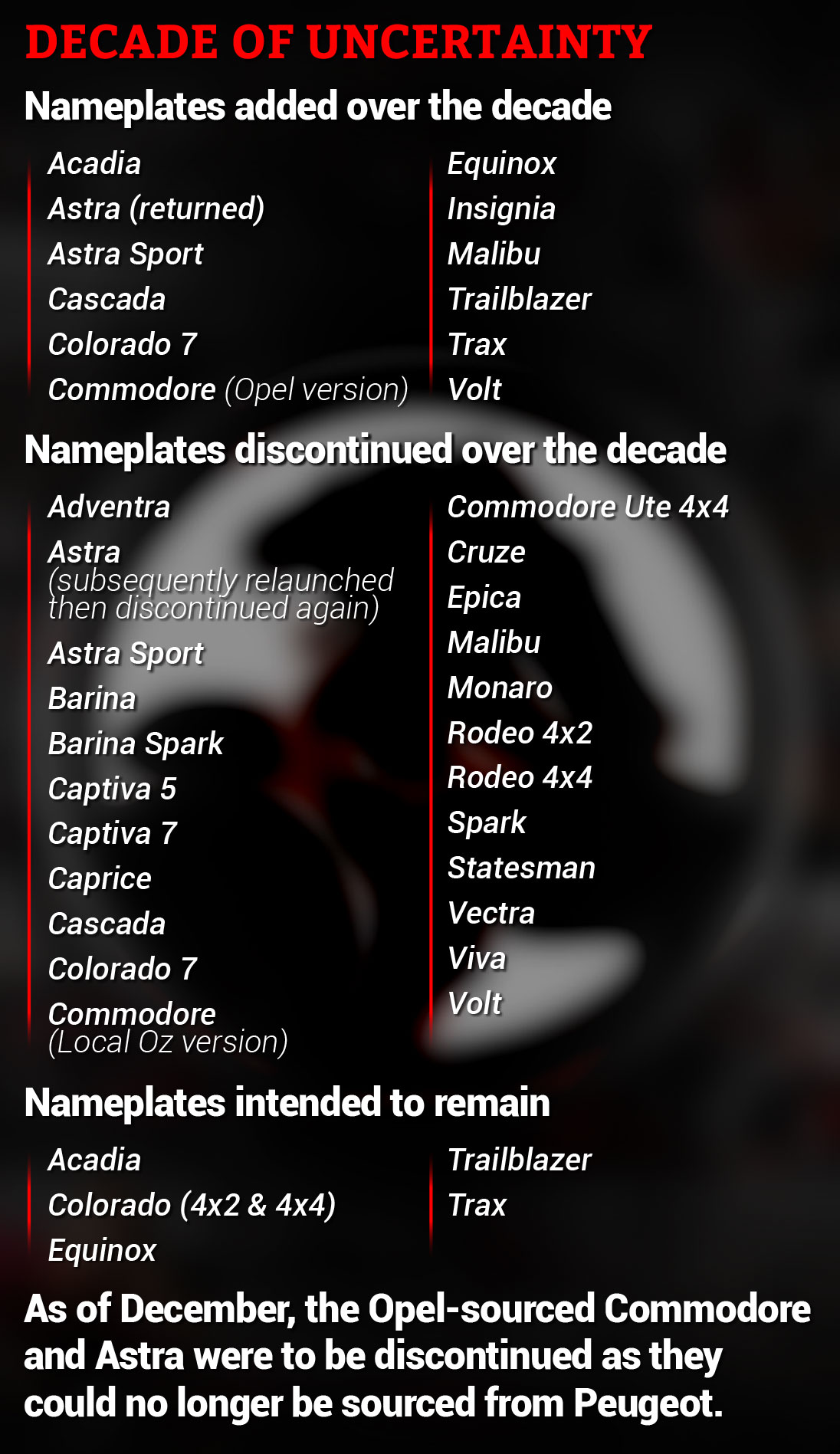 To expect the public, let alone the sales staff in the dealerships, to keep on top of this confetti of names and models was simply asking too much.

So what did Holden sell? Who knew?

Compare that with Mazda which leaped to number two in the market during the decade with more than 100,000 sales (many of them no doubt coming from Holden).

What was really needed was a public education program. This is the Holden you knew about; this is what we sell now. They had to reassure buyers they had not withdrawn from the market (which many people believed) and that all of the public’s car-buying solutions were still available at Holden dealerships. Line-by-line, model-by-model.

Ford did a brilliant job (especially on radio) in the lead-up to becoming a full importer, not only by making sure people knew its dealerships were still open for business but by highlighting hero cars like the locally designed Ranger and alluding to the arrival of the Mustang. Its high-profile retail campaigns let everyone know Ford was well and truly still in business and its high-profile retail commercials focused right across the Ford range as well.

Ford also made a point that it was staying on with almost as many employees as were going; focused on designing and engineering cars like the Ranger for the rest of the Ford world.

At Holden, the brand was screaming out for segment-by-segment exposure of the solutions for buyers at their Holden dealership. Buyers needed to know Holden had everyone’s motoring needs covered. Come one, come all.

The message: ‘We’re here to stay’ that followed the Elizabeth plant closure announcement was fair enough but that was not exactly what was happening at the time with Holden shedding all those nameplates and people finding the cars they were trading were no longer sold any more.

The marketing plan was to refocus Holden to younger age groups but in doing so they overshot and seemed to have abandoned the core group of people who liked Holden – and could afford them.

In an attempt to bring the brand down an age group or two, they launched the slogan ‘Let’s go there’ using very young children talking about the future Commodore as a spaceship and other fanciful notions from the creative department.

In the end those kids did not make it to be old enough to buy a Holden, let alone a Commodore.

When the Acadia, a GMC truck derivative, was added in 2018 the TV commercial featured people who would appear to be too young to pay the starting price.

As Holden was ending its decade of marketing and naming discontent, it placed a great deal of faith in what was clearly a big-budget TV campaign showing an art theft from some stately home or other and the subsequent escape with the painting.

It was supposed to highlight the SUV range of Trax, Equinox, Trailblazer and Acadia but the cars were incidental to the players. The commercial, which had huge exposure, was too distracting.

It was all about the heist and no-one we asked knew what on earth it was about anyway. What was the plot? What’s afoot? Who are these people? Where are they taking the art, and why are they hanging it somewhere else, why did it fall off the wall and why did they run away and why do our brains hurt thinking about this?

From our lounge chairs, all we were seeing was some unexplained caper; a heist and chase. By being too clever by half, it simply detracted from what Holden needed to do.

The real hurt came from the brand being abandoned by fleet buyers. As they watched private buyers looking in other showrooms, egged on by the likes of Hyundai, Volkswagen, Kia and others who ramped up their fleet sales departments, fleet buyers lost faith in Holden as well.

That is the kiss of death for a company that once enjoyed three quarters of its sales from business and governments.

Business purchasers remain the backbone of the Australian vehicle market with about half of all sales coming under the “fleet” banner, and fleet managers must maintain an extremely acute radar when it comes to anything that might impact on the retained values in the vehicles they operate.

The minute there is a whiff of a brand not achieving strong residuals or, worse, are not here for the long run, fleet managers avoid it because their jobs are on the line when the board sees a line of red ink in the fleet operations side of the ledger.

In conclusion, it has to be said that industry observers have been waiting for the other shoe to fall at Holden for at least 12 months. Mary Barra was not tolerating loss-making operations, David Buttner, who was brought in from Toyota to right the Holden ship, departed, and the share was at four per cent.

The first shoe to fall was the closing of the plant. Then all eyes were on how Holden would manage the transition of the brand to being a full importer of cars. If that was not well managed – and it wasn’t – then the other shoe was going to hit the floor. Now it has.

We knew the day before it was announced because someone had put a ‘For Lease’ sign in a window of Holden headquarters in Fishermens Bend over the preceding weekend.