Exclusive: Lexus the one to beat for luxury service

Sitting alongside the mass-market brand study, JD Power’s insight into how well customers are being treated at the service department of each brand’s authorised dealer network has also turned the spotlight back on the leading German brands, all of whom are running at record sales pace but have thrown up surprising results in this third annual CSI study specific to luxury brands in Australia.

While Lexus, which was included in previous studies but not ranked due to small or insufficient sample size, was well out in front with 852 points on JD Power’s CSI index ranking (based on a 1000-point scale), Mercedes recorded a 15-point fall to 828 and Audi dropped three points to 826.

This was enough to keep both Mercedes and Audi above the constantly improving industry average (up seven points to a new high-water mark of 824 points this year) while BMW, despite continuing to place well behind its two German luxury brand rivals, recorded the biggest improvement over the past 12 months, its CSI score up 26 points to 811.

It would be easy to assume that Lexus has always been the brand to beat, but JD Power analysts have advised GoAuto that the Japanese brand’s performance has waxed and waned over the past two years and that it would have ranked below Mercedes-Benz in both 2015 and 2014, had there been a statistically sound sample.

Lexus would also have slipped to third in the luxury brand rankings last year, behind Audi as well. 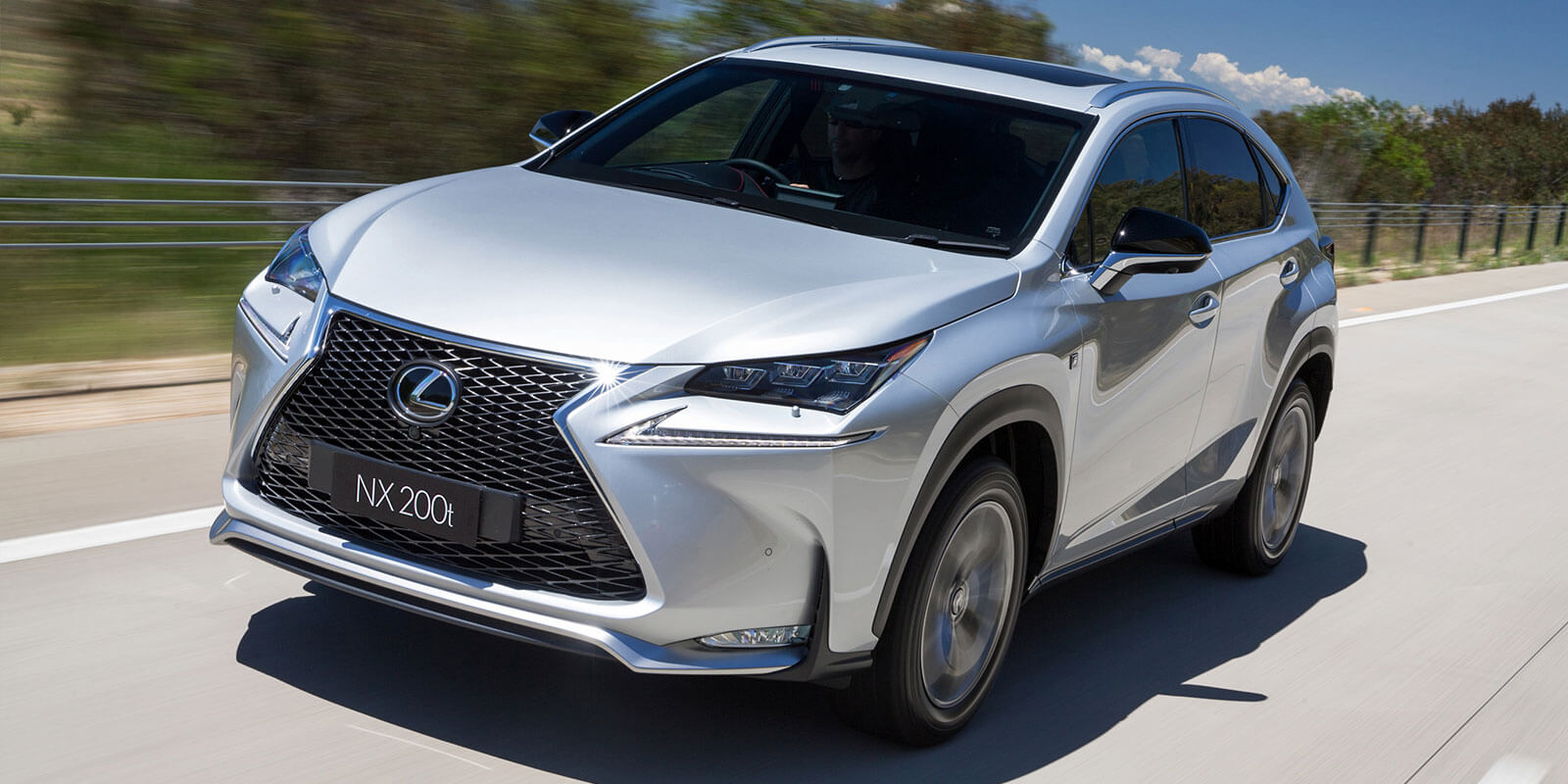 Service ace: The popular NX SUV has brought new buyers into Lexus dealerships, and the Japanese brand is clearly keeping them happy in the service department – even high-demanding millennials.

All four brands included in the study have experienced solid sales growth this year, and are expecting record full-year results come December 31, with Lexus up 4.9 per cent to the end of November, Mercedes climbing 14.7 per cent, Audi 4.4 per cent and BMW 13.5 per cent.

Smaller, more affordable models are continuing to bring in an influx of first-time – and increasingly younger – buyers to these brands, which in turn puts extra pressure on the dealer network in terms of servicing and repairs.

By the same token, luxury car owners typically have high expectations when it comes to their experience at the servicing dealership across the key ‘factors’ measured by JD Power including service quality (accounting for 25 per cent of the CSI score) and issues relating to the service adviser (20 per cent), vehicle pick-up (20 per cent), service initiation (18 per cent) and service facility (17 per cent).

In the study’s ‘Power Circle’ ratings, Lexus scored five out of five for overall satisfaction and five in all but one of the main factors measured in the study (below the mark was service facility, with four).

Mercedes received three power circles overall for an “about average” rating and mixed results in the factors – five for facility, four for initiation and quality and three for adviser and pick-up – while Audi likewise scored three overall and three in most of the factors, except initiation and adviser (four).

BMW managed only two power circles overall, as well as two for all factors except facility (three). 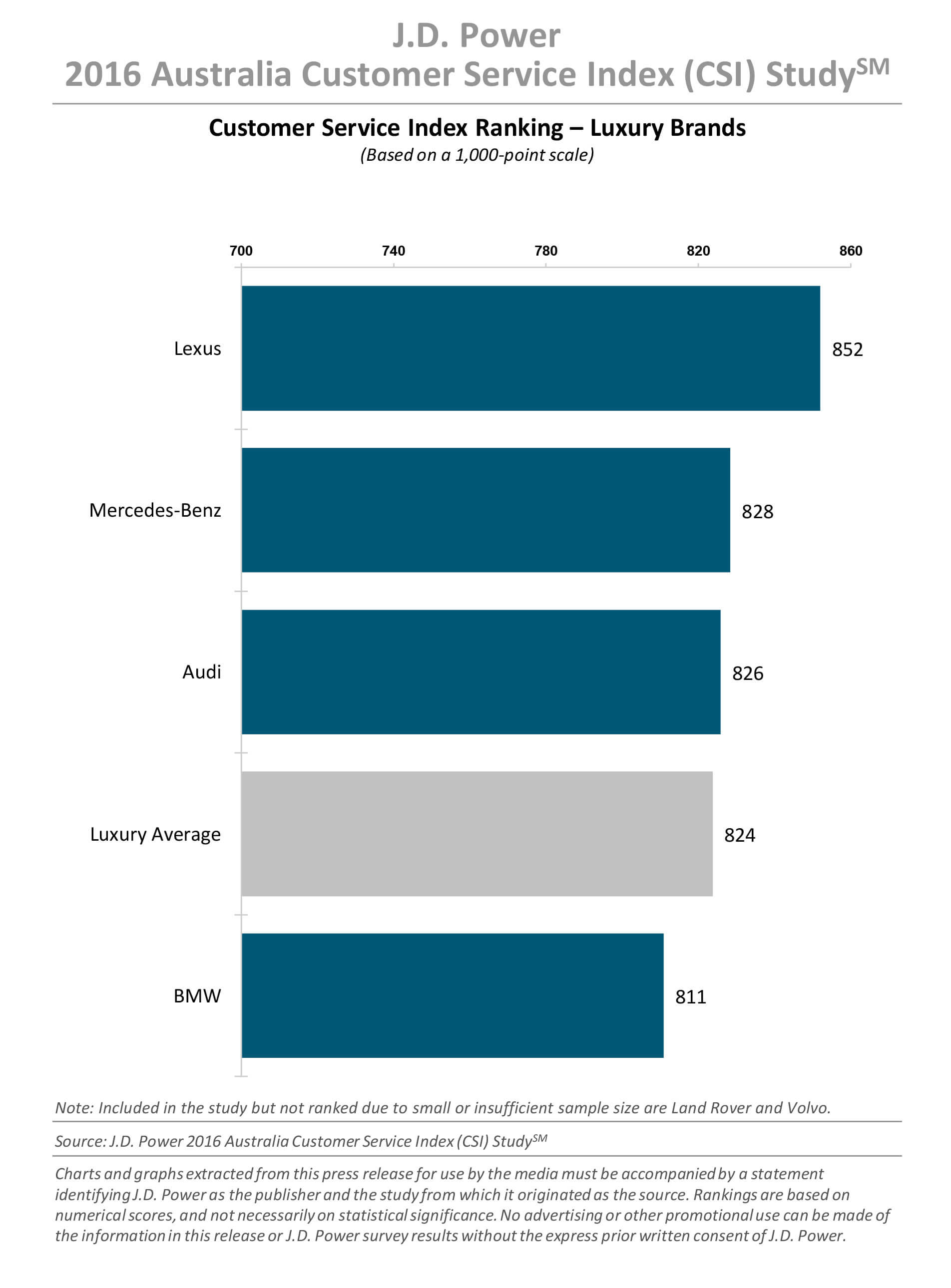 Lexus Australia has continued to prioritise customer service as a core tenet of its brand under new chief executive Peter McGregor, who told GoAuto earlier this year that “probably the key thing for all of us is how we continue advancing the customer experience when they buy a car”.

“That continues to be very important to us. In everything else we are doing, we cannot lose sight of the key underlying element of our brand, which in fact is how our dealers treat our customers,” he said.

BMW’s latest CSI performance remains below the industry average, but marks its third successive increase in its overall CSI index ranking – up from 774 in 2014 and 785 in 2015 – and indicates that the various measures initiated by aftersales general manager Stephan Rausch almost three years ago are beginning to pay dividends.

These included increasing the number of service outlets to reduce bottlenecks in key areas, improving supply and logistics surrounding spare parts and updating the skills base of service technicians.

The latter involves keeping abreast of constantly evolving vehicle technology and, as GoAuto reported in June this year, upskilling technicians in structural repair.

“Our vehicles are fitted with class-leading technology, and without the correct training platform or providing the knowledge to repair these vehicles back to factory standard, it can have a direct effect to the brand’s integrity,” Mr Rausch said. 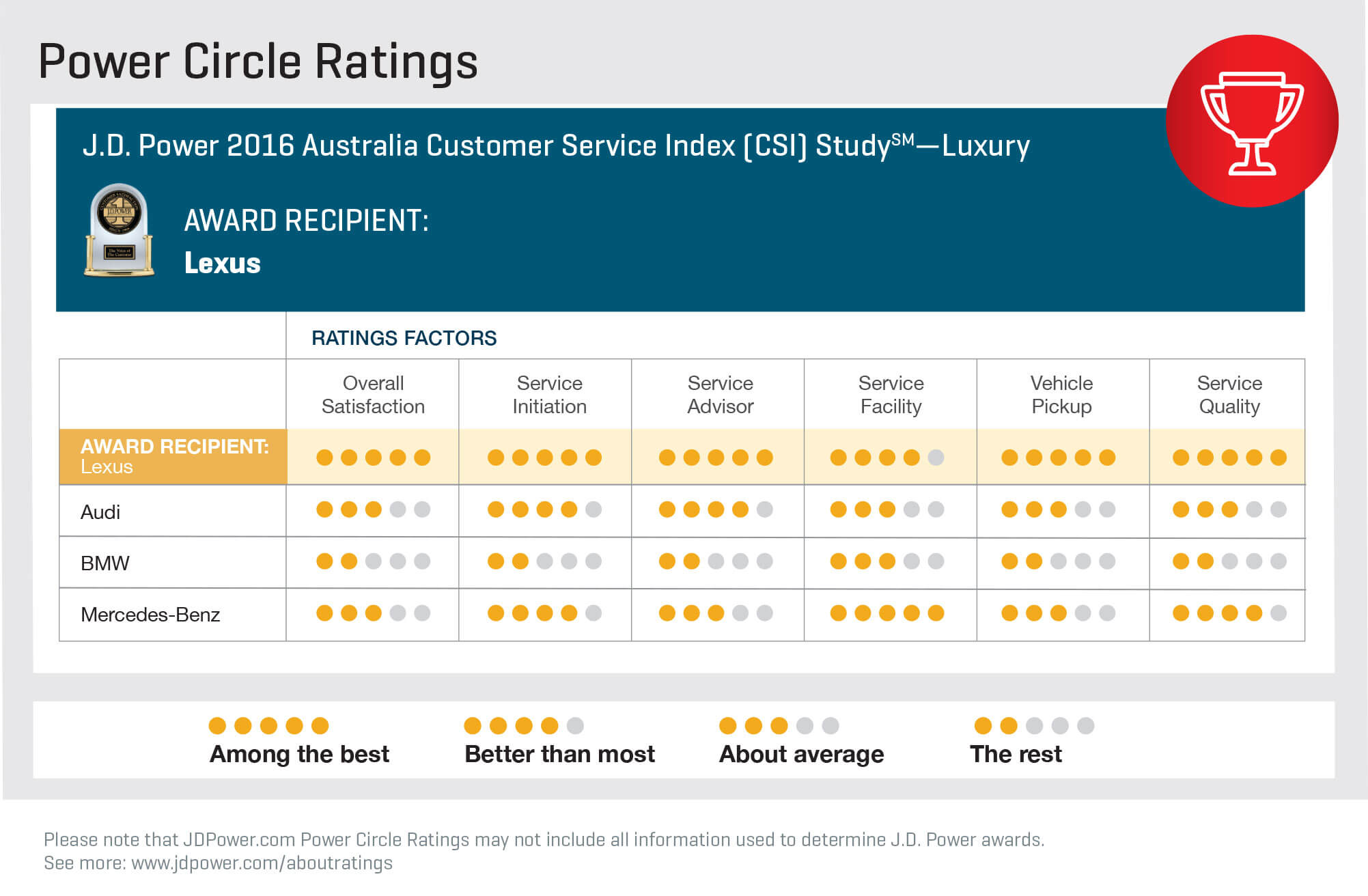 “It can also directly impact the value of a customer’s investment in our product.”

“As sales increases for the luxury market I would expect the demand for servicing will do the same, and if the service centres are not prepared they will certainly impact customer satisfaction,” he said.

Mr Truong emphasised that the average satisfaction level of younger luxury brand customers was much lower than that of older buyers – an index score of 788 for those aged 35 or less, compared to 819 for 36-55-year-olds and 857 for those 56-plus – and, in explaining why, pointed to “the simple task of booking their appointments”.

“The 35-years-or-less (customers) have the highest tendency to book their appointments online – 27 per cent – compared to 36-55-year-olds at 12 per cent and 56-plus at six per cent,” he said. “However, when they do book they are least satisfied with using the dealers’ or manufacturer/OEM websites to do so, with an average score of 755. 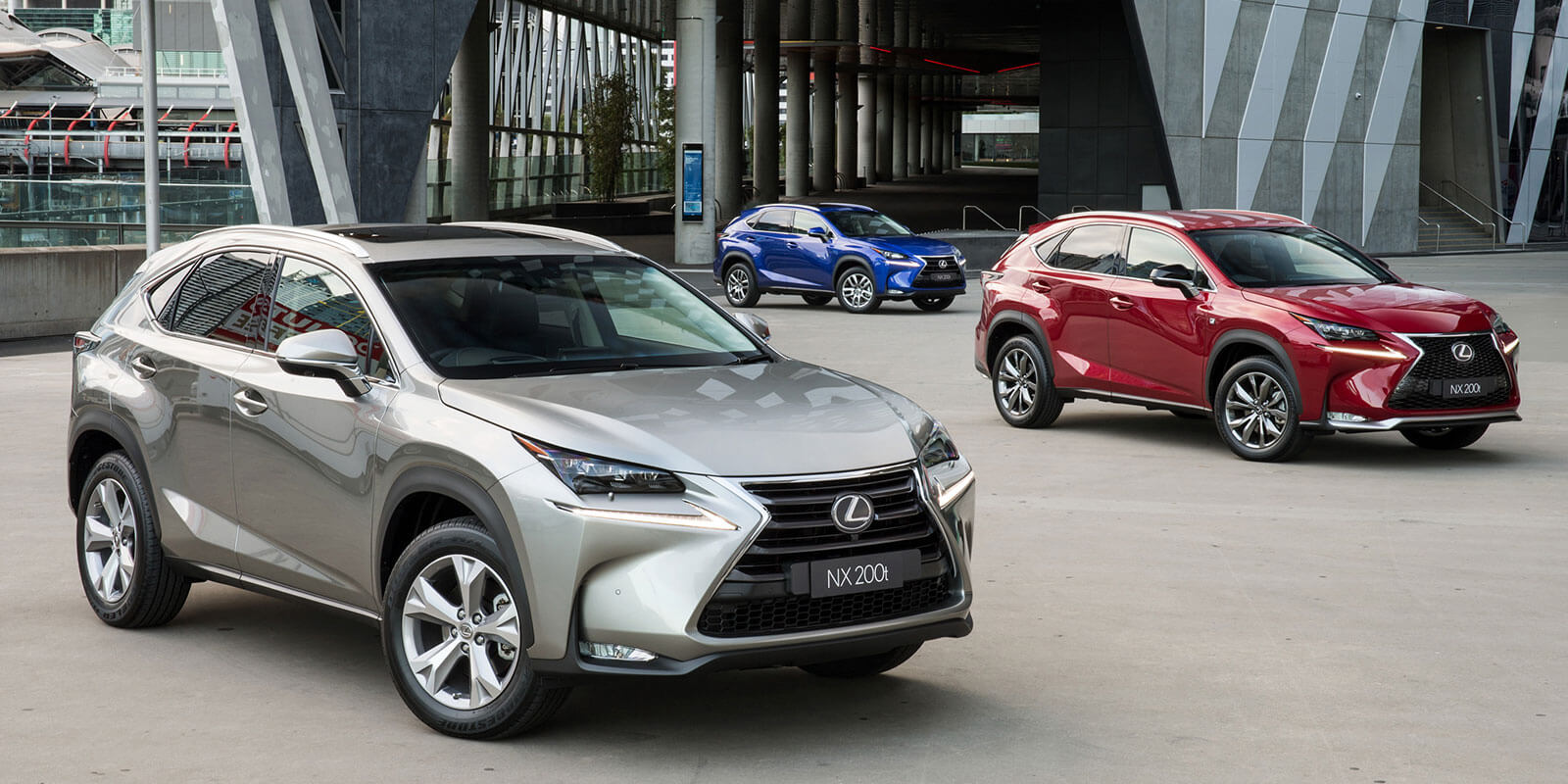 “The simple task of booking an appointment online is proving to be an area of frustration for the younger customers already (and) considering the world is becoming more digital, the automotive industry has a lot of areas to improve on.”

This year’s luxury brand CSI study also highlights how strong lines of communication between the service department and vehicle owners can have a major impact on customer satisfaction, particularly when dealers make the effort to follow up within a few days of the work being completed.

Among those customers who were contacted, overall satisfaction was 844 points, compared with 787 for those who were not.

That said, only 65 per cent of respondents were contracted by the dealership, which is higher than owners in the mass-market brand study (45 per cent) but still leaves more than a third of customers out in the cold.

“While all dealers across the network mention how difficult it is to make contact with their customers, those who are successful in doing so reap the benefits of happier customers,” Mr Truong said.

“Contacting customers and asking about their service experience, and measuring this performance with a view to continually improve, is the key to success.” 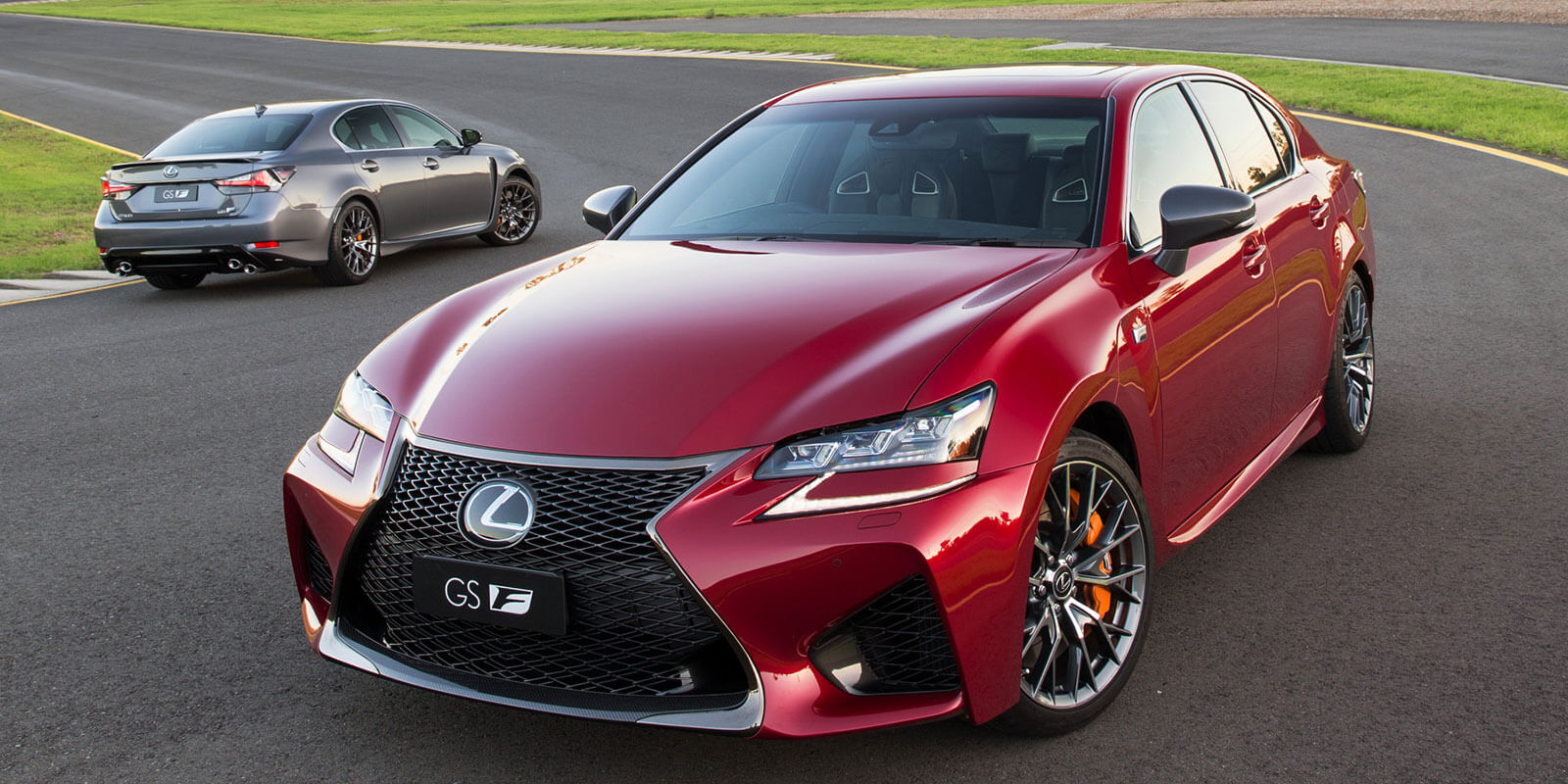 At the other end of the process, when customers drop off their vehicle to the service department, JD Power reports that 31 per cent of respondents said they were “delighted” with the courteousness shown by the service adviser – up from 24 per cent last year.

JD Power Asia-Pacific vice-president Mohit Arora described service advisers as “vital to the success of service centres across all Australia”.

“Customers’ interaction with their service adviser needs to be professional, transparent, trustworthy and most importantly enjoyable,” he said. “A happy customer is one who will return for future work when warranty expires and recommend your services to others.”

In other findings, service centre amenities at luxury brand dealerships – offering business centres, WiFi and reading materials, for example – are of high importance to customers, with those who were offered six or more of these ‘facilities’ having an average satisfaction of 893 points.

Satisfaction drops to 856 points among those who were offered four or five facilities, and freefalls to 791 for those offered three or fewer.

Cost is often cited as less important to customers of luxury car marques than those who purchase vehicles from mass-market brands, but the latest study clearly shows that cost estimates improve satisfaction among owners of high-end brands.

Among highly satisfied customers (those with a satisfaction score of 918 or higher), the vast majority – 84 per cent – said they intend to revisit the dealership for paid services post-warranty, as well as recommend the same brand and servicing dealer to a friend or relative.

As GoAuto reported exclusively late last month, Mazda took top honours in this year’s mass-market CSI study, ahead of Toyota, Subaru and Kia, while Honda suffered the biggest downturn with a fall from first to sixth position on the table.

The luxury brand study uses the same methodology, although a slightly lower threshold for the minimum sample size (75 versus 100) is allowed.

Land Rover and Volvo were included in the study but not ranked due to their small samples.

The overall 2016 Australian CSI study is based on surveys of 4666 vehicle owners. 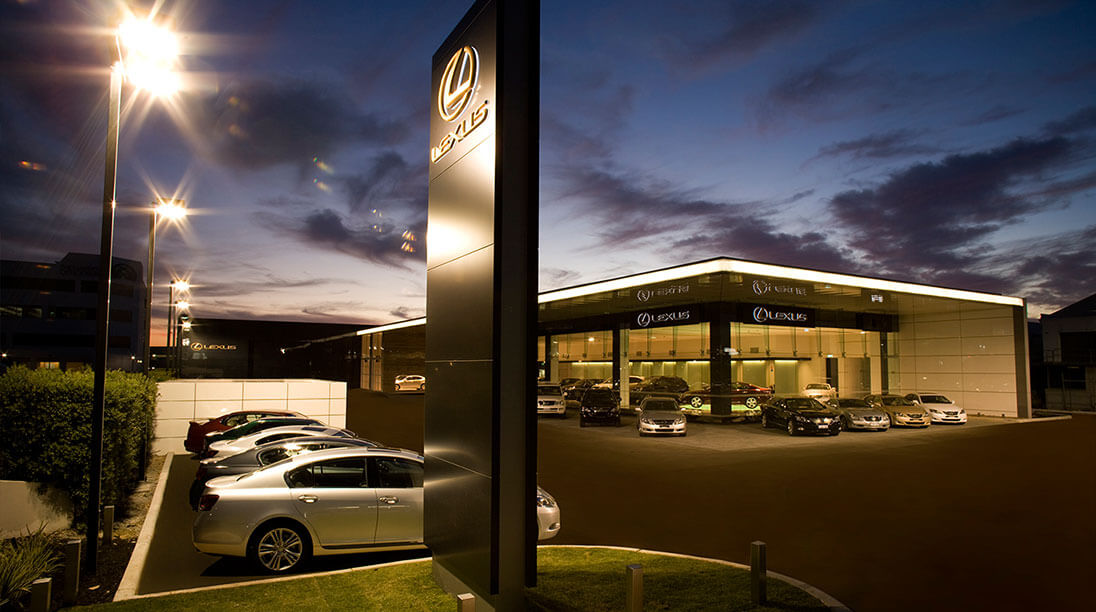